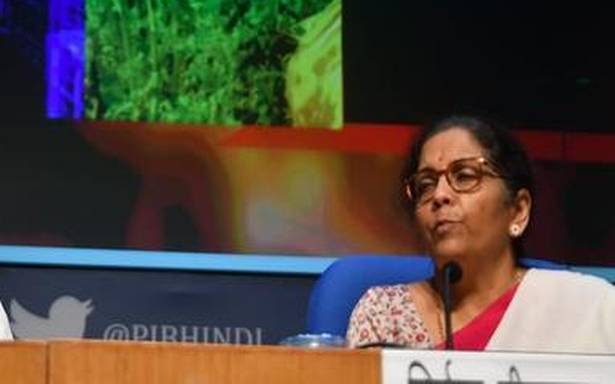 Centre to push through agri-marketing reforms as part of stimulus package.

The Centre will deregulate the sale of six types of agricultural produce, including cereals, edible oils, oilseeds, pulses, onions and potatoes, by amending the Essential Commodities Act, 1955, Ms. Sitharaman said.

Several agricultural economists and farm activists welcomed the reform and investment announcements, but questioned the lack of immediate support to help farmers survive the current crisis.

The Essential Commodities Act was enacted at a time of food scarcity, and needs to reflect current concerns, the Finance Minister said.

“Now what is happening is that farmers are producing. There is an abundance of crops, and this sometimes leads to issues because they would want to export, and we don’t permit that. Because of a flip-flop sometimes, farmers don’t get the benefit. Some other times, the consumers suffer. So there is a need to amend the Act,” she said.

Stock limits will not be imposed on these commodities except in case of national calamity or famine or an extraordinary surge in prices, the Minister said, adding that even these stock limits would not apply to processors and exporters.

The Centre has been attempting to reform agricultural marketing through a model Act which it encourages States to adopt. However, it now intends to enact a central law to allow farmers to sell produce at attractive prices beyond the current mandi system, facilitating barrier-free inter-State trade and e-trading.

Asked how the Centre could enact a law on agricultural marketing, which remains on the State list, the Minister pointed out that inter-State trade falls in the central list.

She added that plans were underway to bring in a facilitative legal framework to oversee contract farming, which would provide farmers with assured sale prices and quantities even before the crop is sown and also allow private players to invest in inputs and technology in the agricultural sector.

Agricultural economist and ICRIER professor Ashok Gulati, who has been advocating these reforms for many years, was elated by the announcement.

“These are big, bold steps in the right direction which will benefit both farmers and consumers. This is long overdue and should have been done in Modi’s first term, but certainly the government deserves compliments for converting a crisis into an opportunity,” he said, noting that some of these reforms have been under discussion for almost two decades.

“It is very smart to push these through at this time. At present, no one can say anything in a crisis,” he added, pointing out that mandi closures during the lockdown had highlighted the urgent need for multiple channels to sell produce.

Fellow agricultural economist Sudha Narayanan, who teaches at the Indira Gandhi Institute of Development Research, was however, more sceptical of the government’s reform push.

“This is the time for relief, which should have been prioritised over reform. Yes, reforms are important and we can learn lessons about them during the crisis, but they should not take the attention away from the impact of the crisis. There is an urgent need to map farmers’ current needs and provide relief,” she said.

Prof. Narayanan listed support for decentralised procurement of perishable commodities, expansion of the rural jobs scheme and efforts to protect farmers’ asset bases by giving them seeds, fodder, fingerlings and day-old chicks as more critical to help them survive the current crisis.

Dr. Gulati also agreed that more needs to be done to support poor farmers at this time.

“The PM-KISAN income support scheme provides only ₹6,000 per year which is too small, especially during a year when many farmers, especially those producing perishables, have suffered heavy losses,” he said. “Alongside reforms and infrastructure investment, if the government was willing to increase income support to ₹ 10,000 at least for this year, that would be a good step.”