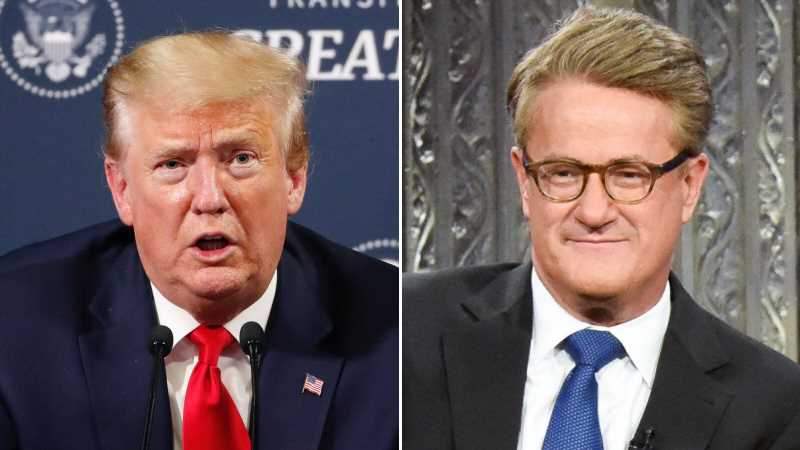 President Donald Trump over the weekend used his massive platform on Twitter to again spread the outrageous and unsupported insinuation that Joe Scarborough — one of his most vocal critics on TV —murdered someone.

Trump fired off multiple tweets suggesting Scarborough, a co-host of MSNBC’s “Morning Joe,” might have killed Lori Klausutis, who died in 2001 while working as an intern in Scarbrough’s congressional office. Scarborough served as a U.S. congressman from Florida between January 1995 and September 2001.

Authorities determined Klausutis, 28, died after suddenly collapsing due to a previously undiagnosed heart condition, hitting her head on a desk as she fell. No foul play was suspected and her death was ultimately ruled an accident by the medical examiner.

″A blow to her head? Body found under his desk? Left Congress suddenly? Big topic of discussion in Florida…and, he’s a Nut Job (with bad ratings),” the president tweeted Saturday. “Keep digging, use forensic geniuses!”

Trump on Sunday shared with his 80 million Twitter followers a story from a notorious misinformation website that claimed to have evidence of “foul play” in Klausutis’s death.

“A lot of interest in this story about Psycho Joe Scarborough,” the president tweeted. “So a young marathon runner just happened to faint in his office, hit her head on his desk, & die? I would think there is a lot more to this story than that? An affair? What about the so-called investigator? Read story!”

Earlier this month, Trump questioned whether Scarborough got “away with murder,” suggesting he left Congress “quietly and quickly” because of it. He also called on Comcast, which owns MSNBC, to look into the matter.

Scarborough and Mika Brzezinski, his wife and co-host on “Morning Joe,” have denounced Trump’s suggestions, calling the president “unwell” and sick.”

During previous administrations, a president insinuating, without evidence, that someone had committed murder would undoubtedly dominate cable news programs and garner condemnation from both Republicans and Democrats.

But for a president who routinely peddles misinformation, mocks women’s appearances and downplays the threat of a global pandemic, it’s possible the claim failed to garner much more than an eye roll from most Americans.

Trump’s claim was reminiscent of the Seth Rich conspiracy theories pushed by some Fox News hosts and Trump allies, which falsely suggested a Democratic National Committee staffer was murdered in 2016 as part of an effort to cover up alleged crimes committed by Hillary Clinton.

But a Yahoo News investigation determined Russian intelligence agents secretly planted the fake report that alleged Rich was gunned down by assassins working for Clinton. In reality, authorities believe Rich was fatally shot during a suspected robbery in Washington.

Rich’s family has been harassed by right-wing activists for years over the baseless conspiracy theory. CNN’s Brian Stelter said Saturday that conspiracy theorists are now going after Klausutis’ family because of Trump’s tweets.

Brzezinski scolded Twitter last week for failing to remove Trump’s reckless tweets or suspend his account. She announced Wednesday that the “wheels are in motion” for a meeting between her and Twitter CEO Jack Dorsey.

In response to a tweet suggesting Twitter wouldn’t take action against Trump, Brzezinski said she agreed but felt it was worth trying anyway.

“It’s just crazy that Trump, the chief law enforcement officer of the US is using the power of the presidency to harass someone who is a critic,” Brzezinski wrote. “Nuts that this is accepted. Nuts.”