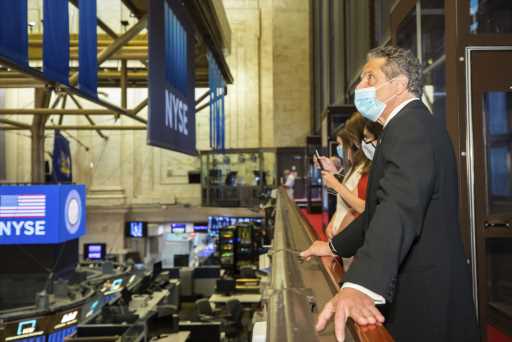 Twitter shares are taking a hit today as President Donald Trump declares war on social media with the Jack Dorsey-led company in the crosshairs for slapping cautionary notes on two presidential tweets this week.

The stock was down 2.6% in afternoon trade in a mixed market with the DJIA up about 0.66%. Shares of Facebook, whose CEO Mark Zuckerberg tried to distance his company’s policies from Twitter on Wednesday, were up 0.72% despite an immiment executive order by the President threatening the bedrock legislation that shields all tech companies from liability for content on their platforms. President Trump’s actual power in this arena is far from clear, according to many experts, but the menace is.

Amazon — whose CEO Jeff Bezos, owner of The Washington Post, is a frequent target of President Trump’s ire – is up 0.95%, and Google parent Alphabet up 1.23%. Apple also rose (up 1.44%) as JP Morgan boosted its price target, citing potential of the affordable iPhone SE in India and emerging markets.

Walt Disney shares are trading down 2.6% after being downgraded to ‘underperform’ by Imperial Capital analyst David Miller on concerns that optimism over parks and movie theaters reopening may be premature.

Exhibitors fell after reports of sparse attendance at theaters that did open. Cinemark plunged more thab 9%, Imax was down nearly 3.5% and shares of AMC Entertainment are down over 8%. AMC stock surged Wednesday after MKM Partners analyst Eric Handler said the company’s near-term risk of a bankruptcy has lessened considerably.

Trading was volatile as tensions with China over Hong Kong rose and new U.S. unemployment claims topped 40 million since the coronavirus pandemic took hold. The Department of Labor Thursday reported 2.1 million new claims for the week ended May 23 — down from the previous week but still higher than anticipated and in beyond-record territory. California and New York again reported the highest number of new claims.

First-quarter gross domestic product (GDP) was downwardly revised to show a 5% annualized decline versus the 4.8% previously reported with only a few weeks of real economic carnage in the numbers.

The Federal Reserve’s so-called Beige Book (a snapshot of economic activity issued eight times a year ahead of the Fed’s Open Market Committee meetings) showed slumping consumer spending, manufacturing, production, home sales, agricultural and energy activity. “Although many contacts expressed hope that overall activity would pick-up as businesses reopened, the outlook remained highly uncertain and most contacts were pessimistic about the potential pace of recovery,” the Fed said.

This all tempered gains from the past two days, which were driven by optimism around a vaccine and gradual reopening by states and boosted the market to highs not seen since March. Consumer confidence unexpectedly stablized in May as the U.S. economy slowly restarted, according to data released Tuesday by The Conference Board.

In a major move for the New York Stock Exchange, it opened its doors Tuesday for the first time in two months to physical trading.