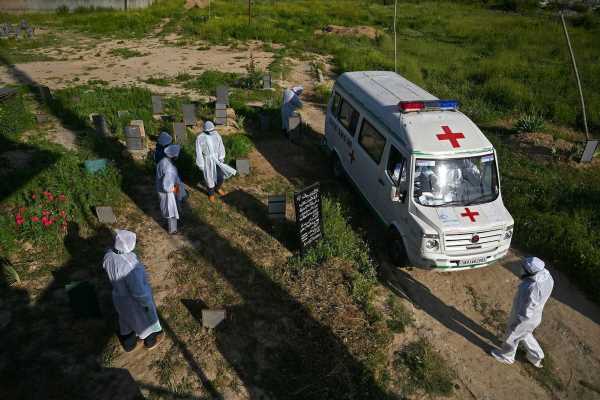 The death toll in India surpassed the number of lives lost in China, while Brazil’s cases hit another daily record as hot spots shift to developing countries ill-equipped to contain its spread.

Latin America now accounts for 40% of daily virus deaths as cases surge in countries from Mexico to Peru. Asia is also wrestling with emerging clusters in South Korea and Japan.

Texas sports leagues can resume games with some fans, even as new infections climbed at almost twice the weekly average. American Airlines will cut management and staff 30% amid a collapse of travel demand.

Subscribe to a daily update on the virus from Bloomberg’s Prognosis team here. Click VRUS on the terminal for news and data on the coronavirus. For a look back at this week’s top stories from QuickTake, click here.

Sao Paulo, the largest city in South America and home to Brazil’s financial hub, will allow shops and malls to resume activities as it begins to reopen businesses after about two months of loosely enforced quarantine orders, despite a record number of new Covid-19 cases reported Thursday in Brazil.

Sao Paulo has been the epicenter of Brazil’s coronavirus pandemic. Brazil reported 26,417 new cases, bringing its total to 438,238, the most in the world behind the U.S.

India is the latest country whose coronavirus death toll has topped the number of lives lost in China, where the pandemic started, as hot spots shift to developing countries ill-equipped to contain its spread.

The South Asian nation’s death toll hit 4,695 on Thursday, climbing past the 4,638 fatalities from Covid-19 in China. The nation of 1.3 billion people now has the highest number of fatalities in Asia, excluding Iran, despite the largest lockdown in the world.

The country’s death toll quadrupled in less than a month, accelerating by more than 1,000 over the past week, while infections have been soaring at a similar pace. Government experts have begun to acknowledge the outbreak won’t peak until June or July.

Jaguar Land Rover will begin reopening its dealerships across England June 1, the carmaker said in a statement. The company says it will enforce “strict social distancing and hygiene measures”, including floor markings to help with social distancing, offering hand sanitizer to customers and having staff wear face masks.

Carmakers in the U.K. have been lobbying for dealerships to be allowed to reopen after car sales plunged 97% in April.

New Jersey may have to eliminate half of its 400,000 state jobs if the federal government doesn’t help make up a $10.1 billion revenue shortage through June 2021, Governor Phil Murphy said.

“I don’t think there’s any amount of cuts or any amount of taxes that begins to fill the hole,” Murphy, a retired Goldman Sachs Group Inc. senior director and Democrat who came to office in January 2018, told Bloomberg Television. Without help, state and local governments will have to dismiss firefighters, police, emergency-medical services and others.

By mid-June, Murphy said, his administration will advise kindergarten-through-12th-grade schools on how to open in September.

American Airlines Group Inc. will cut 30% of its management and support staff, about 5,100 jobs, in response to the dramatic decline in travel brought on by the pandemic.

The carrier also plans to detail a revamped officer team as the company shrinks “for the foreseeable future,” Elise Eberwein, executive vice president of people and global engagement, said in a letter to employees. The airline said it hopes enough staff will volunteer to leave under a new program to avoid forced layoffs.

San Francisco, one of the first U.S. cities to close, is taking steps to reopen businesses, while stay-home orders remain in effect. Starting June 15, restrictions will be loosened on outdoor dining, indoor retail and certain outdoor activities like summer camps, Mayor London Breed said. Professional sports can resume, but without spectators.

The city will open child care and outdoor museums June 1. In the next phase, scheduled for July 13, hair salons will open and indoor dining and real estate open houses will be permitted.

Leagues need a health and safety plan for screening and testing of employees, players and contractors, according to a statement on the state’s website. Six feet (1.8 meters) of distance should be maintained in settings including locker rooms, break rooms, workout or practice facilities, and showers.

Texas cases climbed 3.2%, almost twice the seven-day average, to 59,766, according to health department data. New-case detections outpaced the 2.9% increase in testing and, in terms of raw numbers, the case count increased at the steepest daily rate since the pandemic began. Fatalities rose 2.5% to 1,601.

Coronavirus cases in the U.S. increased 1.2% as compared to the same time Wednesday, to 1.71 million, according to data collected by Johns Hopkins University and Bloomberg News. That’s in line with Wednesday’s rate and the average of 1.3% over the past seven days. Deaths rose 1.4% to 101,129.

New York had more than 366,000 cases and 23,600 fatalities as of May 27, according to Governor Andrew Cuomo. Hospitalizations are declining, and daily fatalities were below 100 for a fourth day, after peaking at more than 700 in April.

The Boston Marathon was canceled by the Boston Athletic Association, which in a tweet said a virtual event will be staged in September. All participants who signed up for the April 20 race will be offered a refund and can participate in a virtual event Sept. 7–14. Participants in the virtual race will run the marathon distance 26.2 miles and upload data to a fitness app.

More than 130,000 Chicago workers will be permitted to return to work on Wednesday as the city begins to reopen its economy, Mayor Lori Lightfoot said Thursday. Industries permitted to open June 3, with specific safety guidelines in place, include office-based jobs, real-estate services, personal services such as salons and barber hops, and child-care centers.

The English Premier League set a provisional restart date of June 17, although Chief Executive Richard Masters said safety requirements must be met before soccer matches resume. The league has 92 outstanding matches for the season.

The league will restart with Aston Villa facing Sheffield United at home with Manchester City playing against Arsenal. Matches will take place without fans. The BBC will broadcast games for free for the first time once matches resume, the network said separately.

The Securities and Exchange Commission has started an inquiry into companies that received U.S. stimulus funds, scrutinizing whether representations made in loan applications were consistent with disclosures in securities filings, according to three people familiar with the matter.

The SEC’s enforcement division has sent letters to some companies that got funding from the Small Business Administration’s Paycheck Protection Program, asking for information about how the funds were being used and for copies of loan applications, these people said.

The U.S. Department of Veterans Affairs is reducing its use of hydroxychloroquine to treat Covid-19 patients, Secretary Robert Wilkie told a House Appropriations Committee panel on Thursday. The VA’s use of the drug peaked at the same time it did in the rest of the nation after President Donald Trump touted its use in March despite a lack of clinical evidence that it works.

Some analyses have found hydroxychloroquine associated with more deaths in Covid-19 patients given the drug’s heart risks compared with patients who didn’t use the treatment.

New York Governor Andrew Cuomo will sign an executive order that lets owners of private businesses deny entry to anyone who doesn’t wear a mask or face covering. “We’re giving the store owner the right to say, ‘If you’re not wearing a mask, you can’t come it,” Cuomo said at a Brooklyn news conference.

Later in his briefing, Cuomo defended the new order, saying individuals “don’t have a right to expose the store owner to the virus” or the right “to expose other patrons in the store to the virus.”

— With assistance by Steve Geimann