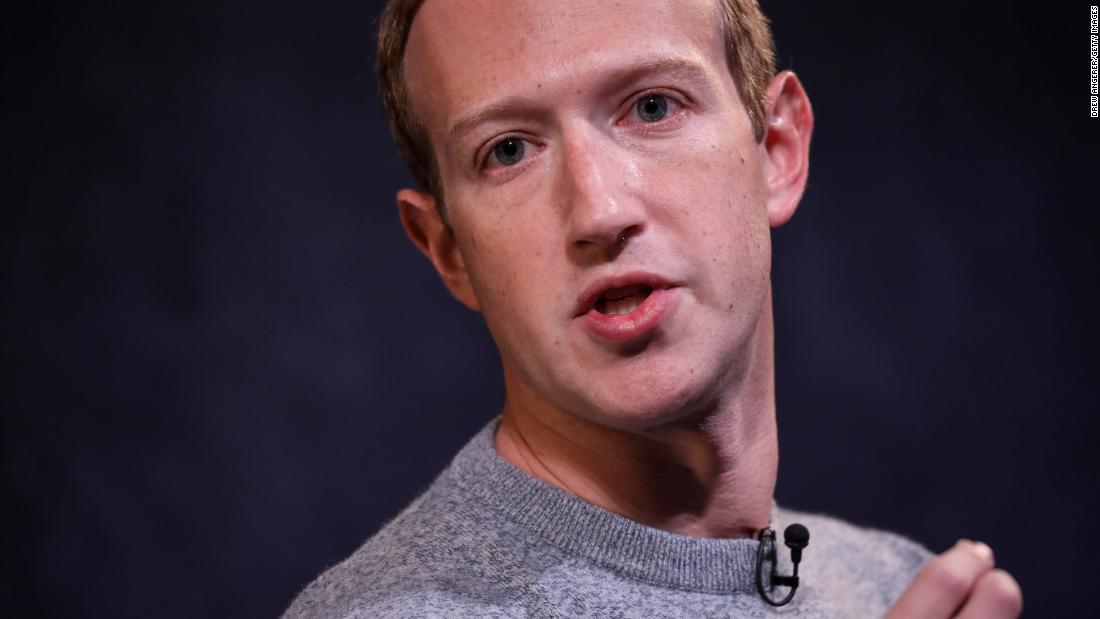 During a company-wide town hall, Zuckerberg struggled to explain his decision-making process as many of his employees, using a real-time feedback tool, reminded him of promises to remove content that calls for violence or that could lead to imminent physical harm.
“It’s crystal clear today that leadership refuses to stand with us,” Brandon Dail, an engineer at Facebook, tweeted as the town hall was taking place.

Facebook spokesman Andy Stone said in a statement to CNN Business that open and honest discussion “has always been a part of Facebook’s culture.”
“Mark had an open discussion with employees today, as he has regularly over the years,” Stone said. “He’s grateful for their feedback.”

The meeting has threatened to ratchet up tensions at Facebook, which has been hit with allegations of right-wing bias from conservatives and criticized by others for tacitly condoning the spread of hate and racism.
Another Facebook employee told CNN Business they found Zuckerberg’s answers to staff questions at the town hall lacking, and said the CEO risked alienating more of his staff rather than addressing their concerns.
During the event, Facebook staff shared links to a video of an exchange between Democratic Rep. Alexandria Ocasio-Cortez and Zuckerberg last October when he said: “If anyone, including a politician, is saying things that can cause, that is calling for violence or could risk imminent physical harm … we will take that content down.”
At one point, roughly 22,000 people had tuned into the live video feed, according to another Facebook worker who was watching the stream. The figure reflects nearly half of the company’s 48,000 employees.
The top question for Zuckerberg, which called for changes to the company’s stance on political speech, received more than 5,400 votes from workers, the employee said.
Not all employees disagree with Zuckerberg’s position, however. One told CNN Business, “Supporting free speech – especially when you vehemently disagree with what the person is saying – is a hard but important stance needed to make sure everyone can have a voice.”
The employee said it is hard to be sure what portion of Facebook’s staff supports Zuckerberg’s decision. At least a few people with whom they have spoken do support it but are nervous to say so more publicly because they have seen the pushback within the company, the employee said.
Tuesday’s event follows days of employee activism over Facebook’s handling of Trump’s content.
Some staffers staged a virtual walkout on Monday to protest decisions made by the company’s leaders concerning posts by Trump. And at least one worker, software engineer Timothy Aveni, has quit his job, saying it is no longer feasible to “keep excusing Facebook’s behavior.”
Facebook’s workforce is known for keeping its disputes with executives largely private. But that changed on Friday, when Zuckerberg announced he would not act against content by Trump that Twitter had flagged earlier as having violated its own rules. The decision has prompted widespread criticism within Facebook that has spilled into public, with numerous employees expressing their disagreement on Twitter.
One of Trump’s posts had claimed, in reference to the demonstrations in Minneapolis, that “when the looting starts, the shooting starts” — a phrase with racist origins. Trump later professed not to know the history of the phrase, but he allowed the original remark to stand on Facebook and Twitter.
Zuckerberg said the content provoked in him a “visceral negative reaction.” But he justified his decision not to act against the posts, citing his responsibility as the “leader of an institution committed to free expression.”

In the eyes of his harshest internal critics, Zuckerberg had simply caved on prior principled commitments.
“Mark can patch this one section of Facebook’s policies, but if he derives his principle from the particular actions he wants to take, instead of taking action based on principle, it’ll be fruitless in the long run,” Aveni said in response to a CNN reporter’s question on his post.
Source: Read Full Article