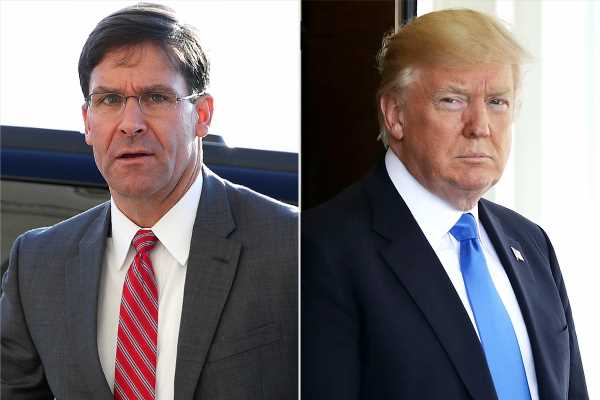 The New York Times reports that "about 1,600 airborne troops and military police have been ordered to be positioned outside the capital," according to U.S. officials. The federal government has broader powers in D.C., compared to the states.

Earlier this week Esper appeared to try and distance himself from Monday's use of law enforcement for Trump's controversial appearance in front of St. John's Episcopal Church, which the White House says was an effort to project resolve.

The defense secretary, who accompanied Trump on his walk to the church, had told NBC News, “I didn’t know where I was going," adding, "I wanted to see how much damage actually happened.”

Later, however, Esper said that he did actually know where he and the others were heading, though he said he didn't know there would be a photo-op.

Speaking with reporters at a press briefing Wednesday afternoon, McEnany was vague about how Esper's public split with the president would affect his job.

"Should the president lose faith," McEnany said, "we will all learn about that in the future."

His previous defense secretary, Jim Mattis, resigned in December 2018 in large part due to a disagreement with Trump over pulling troops out of Syria, where the U.S. was providing military support for allies against the Islamic State, according to the Times.