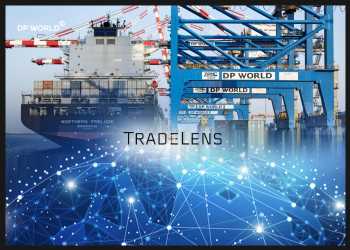 DP World has completed the early stages of integration with the platform, with the Cochin Port (India) already connected with the TradeLens platform via API technology. It also plans to collaborate with other DP World business units, including the feeder line Unifeeder, which has also been initiated.

DP World is working to deliver integrated supply chain solutions to cargo owners, backed by its global network of ports, terminals, economic zones and inland operations. It aims to connect all its 82 marine and inland container terminals, as well as feeder companies and logistics divisions with TradeLens.

On the TradeLens blockchain network, the port operator is expected to operate a blockchain node, participate in consensus to validate transactions, host data, and act as Trust Anchors, or validators for the network.

TradeLens provides visibility across the entire supply chain, from booking to clearance to payments and is built on input from the industry including direct integrations with more than 110 ports and terminals, more than 15 customs authorities around the world, and an increasing number of intermodal providers.

DP World is among more than 150 diverse organizations worldwide involved in the TradeLens platform, which was launched in August last year, just six months after the blockchain collaboration between IBM and Maersk was announced in January 2018.

The platform has the data for more than half of the world’s ocean container cargo or over 15 million containers, on the blockchain network after the recent addition of four of the five largest global port operators as well as five of the top six shipping carriers, including Maersk itself, on the network.

The use of TradeLens is claimed to reduce the transit time of a shipment by 40 percent, saving thousands of dollars.