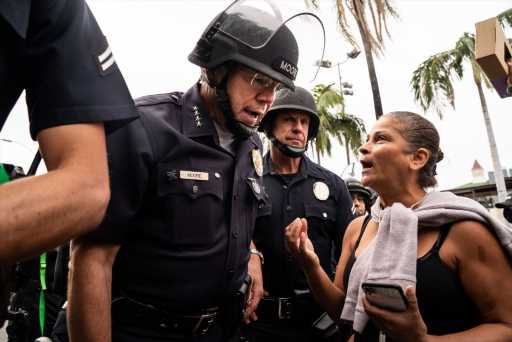 “I remain steadfast in my belief that the continued funding of essential functions of our Department equates to public safety,’ the City of Angels top cop said in an implications heavy statement today (READ THE FULL STATEMENT BELOW)

In the same news release, the LAPD said, “The size of this budget reduction is significant, requiring a top-to-bottom assessment including how we go about our most basic operations.”

Moore’s statement comes after L.A. Mayor Eric Garcetti publicly backed him in the unsurprising blowup over his thoughtless words accusing looters of being complicit in the police induced death of George Floyd. No stranger to deft power plays, Garcetti’s announcement Wednesday of the cuts to the LAPD’s massive budget clearly reflect some backroom realpolitik that allowed Moore to keep his job and Garcetti to rein him and the department in, at least on the bottom line.

On Wednesday, Garcetti unveiled $250 million in cuts to the city’s proposed budget with an as yet unspecified intent to reallocate those funds to communities of color, “so we can invest in jobs, in education and healing.” Of that $250 million, $100 to $150 million would come from the police’s annual haul of city cash.

In that context, Moore’s words over the LAPD’s $1.8 billion dollar budget today reflect another heave in the tug-of-war of the civil bottom line, as well as signal of how police will react to reform through the usually generous public purse. Many of those out in the streets in cities all over America this past week have advocated defunding police departments for the violence perpetrated against communities of color.

Today’s statement by Moore also comes as the Mayor said that several long nights of curfews in L.A. over protests and unrest in the wake of the killing of Floyd by Minneapolis police on May 25 would now end. Over those nights, the LAPD arrested thousands of citizens, the vast majority for defying the curfews.

Here is what the LAPD said today, including Moore’s full statement:

This Department remains committed to 21st Century Policing principles that build trust and bolsters accountability and transparency. Last night, Mayor Eric Garcetti and Police Commission President Eileen Decker made a series of announcements to further support the historic strides in our commitment to community engagement, meaningful partnerships, and constitutional policing. The Department looks forward to learning more about the details of the further reforms envisioned in the coming days to fulfill the commission’s vision for the future.

Included within identified initiatives was the $100 to $150 million cut to the Department’s Budget. The size of this budget reduction is significant, requiring a top-to-bottom assessment including how we go about our most basic operations. The Department has begun the comprehensive review to identify potential costs savings and service reductions to meet this goal.

Chief Moore stated, “The reforms announced tonight are consistent with my commitment to a Department that builds trust by recognizing the legacy of historical wrongs and acts to tear down any vestiges of racial injustice. Regarding the identified budgetary cut, I look forward to better understanding what steps can be taken to meet this ambitious goal. I remain steadfast in my belief that the continued funding of essential functions of our Department equates to public safety. I will work closely with the Mayor, the City Council, the Commission, and all our city’s leaders to lift up our common values while serving the people of Los Angeles.”