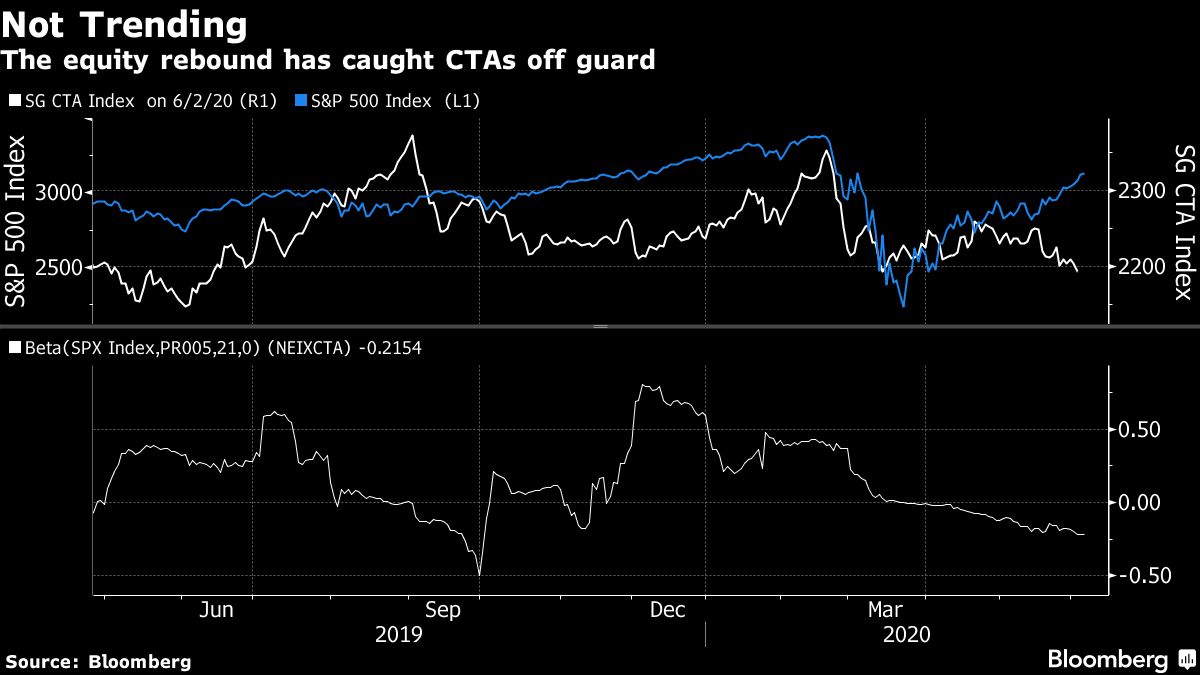 Quants who surfed the fastest bear market in history are finding life harder now that Wall Street bulls are back with a vengeance.

These trend followers have been left behind as the computer models that govern their trading styles struggle to capture cross-asset markets moving at a breakneck pace.

After the quickest correction on record in the corona crash, the S&P 500 has jumped almost 40% in a little more than two months. Ten-year Treasury yields are rebounding after an historic slide, while the euro is suddenly breaking out of its yearlong downtrend versus the dollar.

All that whiplash means the quantitative investors known as commodity trading advisors now have little to boast about after their initial outperformance in the virus-spurred crash.

A Societe Generale SA index tracking the cohort’s performance is down 3% for the year. Investors have redeemed $28 billion from the industry as of April, according to Eurekahedge.

These systematic managers who speculate in the futures market are still beating hedge funds overall this year. But their performance is a far cry from the gains in 2008 that cemented CTAs’ reputation for delivering “crisis alpha.”

“We’re in the second phase of the game as it were and that has been a bit more challenging for CTAs,” said Mick Swift, Dublin-based chief executive officer at Abbey Capital Ltd., which allocates to such funds. “The majority of CTAs are trend followers — they look for trends to persist.”

Animal spirits unleashed by historic policy stimulus are spurring a risk-on rally that’s defying economic gravity and snuffing out bearish trends. That’s just the latest in a decade of uphill battles for CTAs whose underperformance many have attributed to activist central bankers making it harder for bearish trends to stick over an extended timeframe.

On the current trajectory, 2020 would mark the third straight year of outflows for the $200 billion cohort, according to Eurekahedge.

As this year’s spike in volatility restrained risk-taking in their models, CTAs have had muted equity exposures and so have missed out on the $20 trillion global rally.

After turning bearish on stocks and bullish on government bonds, these quants are now unwinding their long fixed-income positions and adding bets on S&P 500 and Nasdaq 100 futures, according to Masanari Takada, a quantitative strategist at Nomura Holdings Inc.

“The present risk rally was kicked off by global macro hedge funds and other top-down investors closing out bearish positions,” Takada wrote in a note on Thursday. “CTAs are now having to rush to catch up with the risk rally.”

Redemptions have been fueled by investor demand for cash and poor performance among some managers. The five CTA funds that posted the largest outflows in April lost 7% this year on average through that month, while those that received new money gained 3%, said Peter Laurelli, global head of research at eVestment, which tracks institutional flows.

Among asset managers included in the SocGen benchmark, for instance, the Graham Tactical Trend UCITS Fund and IPM Systematic Macro UCITS Fund are both down 9% this year, while the Schroder GAIA BlueTrend fund run by Systematica Investments is up 4%.

One determining factor for CTA performance is the trading horizon. Short-term funds, which seek to ride trends over the course of a few days, are up 2.9% this year in a SocGen index.

Such funds like to say they’re better suited for a fast-moving market. But Alan Dunne, a managing director at Abbey Capital, stresses that short-term strategies have largely underperformed over the past decade, so a blend of styles is still the way to go.

The study doesn’t explore why this is happening, but practitioners have pointed to monetary easing, crowding and weaker liquidity as potential culprits.

“The frequency of trend breaks has increased in recent years, which can help explain the lower performance of monthly trend following in the last decade,” the researchers led by Ashish Garg wrote.

— With assistance by Cecile Gutscher