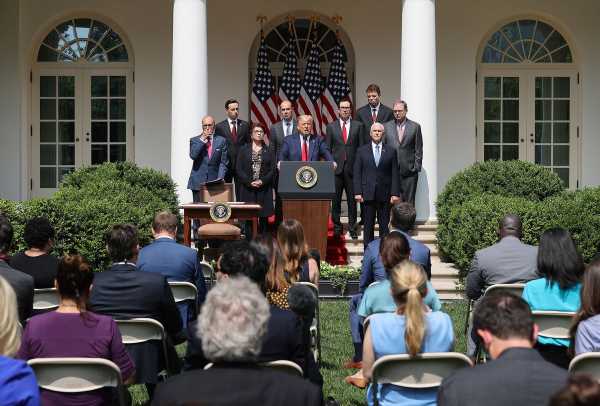 President Donald Trump said he expects the U.S. economy to recover from the coronavirus outbreak even faster than predicted after Friday’s jobs report showed a surprise gain of millions of jobs — but he warned against electing Democrats in November.

“The only thing that can stop us is bad policy,” Trump said in triumphant remarks at the White House, setting aside a week of turmoil over his hostility toward nationwide protests against police brutality.

Trump’s lengthy and extemporaneous remarks, delivered in a steamy Rose Garden, served to lay out a second-term agenda just a day after he met with top political aides at the White House to discuss reversing his sagging poll numbers. He discussed work yet to be done on border security, U.S.-China relations and about working with Congress “on bipartisan issues” to keep the economy surging, including further stimulus.

The country’s labor market unexpectedly bounced back in May, with nonfarm payrolls rising 2.5 million after falling 20.5 million in April in the largest drop on record. The jobless rate fell to 13.3% from 14.7%, defying economists’ expectations it would reach 19%.

Trump said the numbers should encourage governors to release the brakes on lifting stay-at-home orders and other measures intended to curb the coronavirus outbreak.

“I don’t know why they continue to lock down,” he said. “The ones that are most energetic about opening, they are doing tremendous business.”

Trump all but declared the three crises that have plagued both his presidency and his re-election plans as essentially over -- the coronavirus pandemic, the recession it precipitated and the protests, which are calming down. And he took credit for ending all of them.

“It’s the greatest comeback in American history,” he declared.

Although Trump encouraged more states to reopen their shuttered economies and to “wear a mask if you want,” public health exerts say the outbreak is far from over.

“It’s like the third inning of a baseball game, and we’re down 8-2, and the manager concludes the game is over, says we’ve won, and walks out,” said Ashish Jha, director of the Harvard Global Health Institute.

The economic recovery, Trump said, “is far better than a V,” referring to a debate about whether the recovery from the economic collapse precipitated by the outbreak would be V-shaped or take longer. But he encouraged Congress to add to the trillions of dollars of economic stimulus it’s already passed, saying that “we’re set up to do more if we want; I think we should because we are dominant.”

The numbers signaled that the U.S. economy is recovering faster than expected from the damage wrought by the coronavirus pandemic. Economists had predicted a decline of 7.5 million jobs in the unemployment rate to 19%. No one in Bloomberg’s survey had forecast an improvement for either metric.

But even after the recovery in May, the country has still lost 18 million jobs since March, and states received another 1.9 million jobless claims last week.

Additionally, while overall unemployment improved in March, the rate for African Americans ticked up to 16.8%, the highest in a more than a decade. Latinos face an unemployment rate of 17.6%.

“The bounce-back started earlier than most expected, but don’t get too excited about this one month of data,” said Nick Bunker, an economic-research director at jobs website Indeed. “Sectors hit hardest by the coronavirus are the ones seeing the largest bounce-back in employment.”

There are signs that the financial pain is extending beyond the retail, travel, leisure and restaurant industries immediately impacted by the shutdowns, which Trump on Friday pledged to help.

The jobs numbers underscored the reasoning behind the White House’s refusal to issue a formal economic forecast this summer, a part of the budget process designed to judge whether the administration’s beginning-of-the-year projections are holding up. A person familiar with the matter said the unprecedented nature of the outbreak made a mid-year forecast impossible to issue.

The May jobs report could also roil the debate over the timing and scope of additional economic stimulus, with Democrats calling for more aid to reverse the downturn and Republicans taking a wait-and-see approach.

While the numbers signaled good news for Trump, the police brutality protests have created new headwinds for the president. He claimed Friday that his tough law-and-order stance led to the calming of the violence that persisted most of this week.

Demonstrations swept U.S. cities for a 10th consecutive night on Thursday over the killing of George Floyd, an unarmed black man, in police custody in Minneapolis. Trump has expressed sympathy over Floyd’s death but has focused on restoring “law and order” after protests in some cities turned violent and has not shown support for broad reforms of police behavior.

During his remarks Friday, Trump said that he hoped Floyd “is looking down right now and saying there’s a great thing happening for our country.”

Video of a confrontation between Buffalo police and an elderly demonstrator went viral on Thursday. The man was seen lying on his back with blood pooling underneath his head after being shoved backward by a police officer.

And Trump continues to face criticism over his decision to stage a photo op holding a Bible in front of St. John’s Episcopal Church in Washington, after federal officers forcibly cleared peaceful demonstrators from the surrounding area. After Senator Lisa Murkowski, an Alaska Republican, aligned herself with scathing criticism of Trump’s approach to the protests from his former defense secretary, James Mattis, the president said Thursday he would campaign against her re-election in two years.

Trump’s former chief of staff, John Kelly, also backed Mattis in a virtual panel discussion on Friday with Anthony Scaramucci, the financier who once briefly served as Trump’s communications director but has since turned on the president.