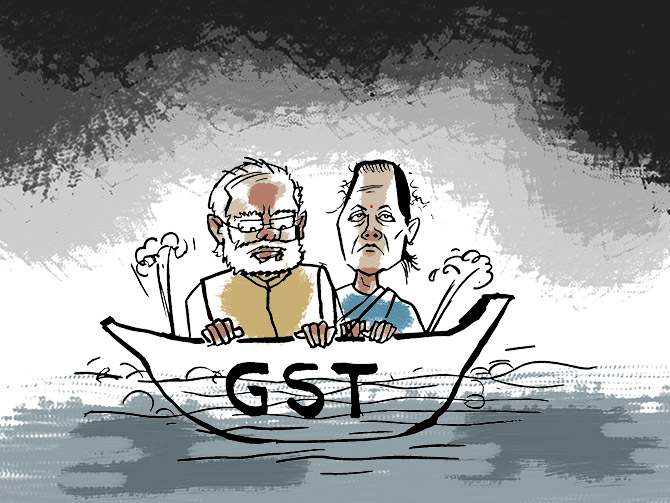 The Centre managed to collect only Rs 990 crore as compensation cess in April 2020-21, almost one-ninth of the figure of Rs 8,874 crore mopped up a year ago. The subdued collection would further increase states’ problems unless the GST Council, which meets next week, decides to borrow from the market.

States’ woes on the goods and services tax (GST) compensation front seem to be aggravating. This is because the Centre managed to collect only Rs 990 crore as compensation cess in April 2020-21, almost one-ninth of the figure of Rs 8,874 crore mopped up a year ago. These figures were released by the Controller General of Accounts.

The subdued collection would further increase states’ problems unless the GST Council, which meets next week, decides to borrow from the market.

It is widely acknowledged now that the Budget numbers have gone awry after outbreak of the coronavirus (Covid-19). On the other hand, the monthly GST compensation requirement is estimated at Rs 20,250 crore in 2020-21 against Rs 13,750 crore last year.

Analysts attributed the muted compensation cess collections in April to the deferring of GST payment for March, April and May to June-end. The government had earlier announced that registered GST payers with aggregate annual turnover of less than Rs 5 crore can pay taxes and file GSTR-3B (summary input-output returns) due in March, April and May by the last week of June. For such taxpayers, no interest, late fee or penalty were to be charged.

Those with an annual turnover of at least Rs 5 crore can pay taxes till May 5 for March activities, without bearing any interest cost.

However, if it is paid after this date and by June 30, an additional nine per cent interest a year will be levied. This interest rate is half of the current rate of 18 per cent.

The compensation mechanism to states under GST has come under strain due to the inadequate collection amid the bleak consumer demand even before the outbreak began.  That is why the GST Council, in its March meeting, took up a proposal on whether it can borrow from the market to meet the states need for compensation. The issue was who will stand guarantee for such borrowings.

Abhishek Jain, tax partner at EY, said, “Funds through the compensation cess have not been enough to adequately compensate states for the revenue loss. With limited avenues to augment GST collections, the central government has been mulling ways to pull together amounts for compensating states on revenue loss.”

Assam finance minister Himanta Biswa Sarma said while the idea to have the GST Council borrow from the market was mooted in the last council meeting, it may not be a feasible idea.

“The GST Council is neither a sovereign body nor a sub-sovereign body. So, even if you take loan, somebody has to give a guarantee. If the central government gives guarantee to loans, it can itself borrow,” he said.

Assam collected just 20 per cent GST of the average monthly trend in April, Sarma said. “In May, we collected around 40 per cent. People pay as and when they are required to pay and not necessarily in the next month,” said Sarma.

He added that the state will collect 75 per cent of its receivables in June. “The first quarter will be bad but with the impetus we are getting from the Centre, things will go uphill from here,” Sarma said.

West Bengal finance minister Amit Mitra said the Centre should borrow to compensate states as it will anyway have to give a sovereign guarantee.

“Alternatively, the Centre should consider paying states from the Consolidated Fund of India. States are in a very bad shape. West Bengal collected only 13 per cent GST revenue in April compared to the same period last year,” he said.

Kerala finance minister Thomas Isaac said the GST Council should be allowed to borrow from the market to pay states and simultaneously extend the compensation cess by another year in order to repay debt.

“We have to manage the crisis. So, at least, the Centre should pay what is due to us, like the GST compensation cess. The Centre can allow the GST Council to borrow and pay and extend the cess for one more year,” he said.

He expected a 15 per cent decline in state’s GDP in FY21.

GST revenue was about 7 per cent of the monthly average in April at Rs 150 crore-Rs 200 crore against the Rs 3,000 crore average collection, he said.

Meanwhile, Bihar saw a shortfall of 86 per cent in GST collection in April.