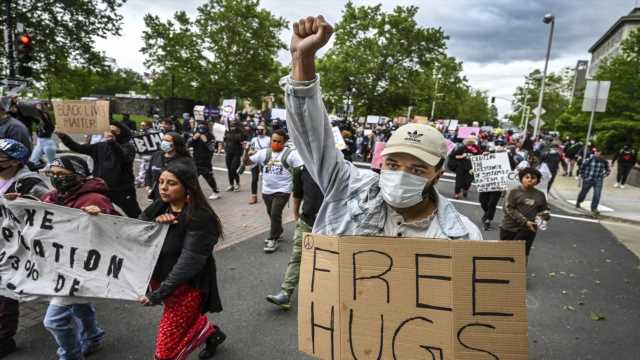 George Floyd demonstrations across the country were mostly peaceful over the weekend. FOX Business’ Cheryl Casone with more.

Adidas will invest $20 million to support black communities throughout the country as part of a trio of initiatives meant to promote equality and an end to systemic racism following the death of George Floyd, the company said on Tuesday.

The German sports apparel company said the $20 million pledge over four years will “support, empower and elevate the Black community.” The grant money will go toward existing company initiatives, including Adidas Legacy, described as a grassroots basketball program for underserved communities, and the Adidas School for Experiential Education in Design, a program meant to provide career opportunities in footwear design.

“The events of the past two weeks have caused all of us to reflect on what we can do to confront the cultural and systemic forces that sustain racism. We have had to look inward to ourselves as individuals and our organization and reflect on systems that disadvantage and silence Black individuals and communities,” Adidas CEO Kasper Rorsted said in a statement. “While we have talked about the importance of inclusion, we must do more to create an environment in which all of our employees feel safe, heard and have equal opportunity to advance their careers.”

Aside from the additional funding, Adidas said it will offer 50 scholarships each year for black students at its partner colleges over the next five years. The company also will boost diversity within its workforce, pledging that at least 30 percent of all new U.S. hires at the Adidas and Reebok brands will be filled with black or Latino candidates.

REDDIT CO-FOUNDER ALEXIS OHANIAN RESIGNS FROM BOARD, ASKS TO BE REPLACED BY BLACK CANDIDATE

“We recognize the immense contribution of the Black community to our success and that of others,” Adidas said in a press release. “We promise to improve our company culture to ensure equity, diversity and opportunity. We understand that the fight against racism is one that must be fought continually and actively. We must and will do better.”