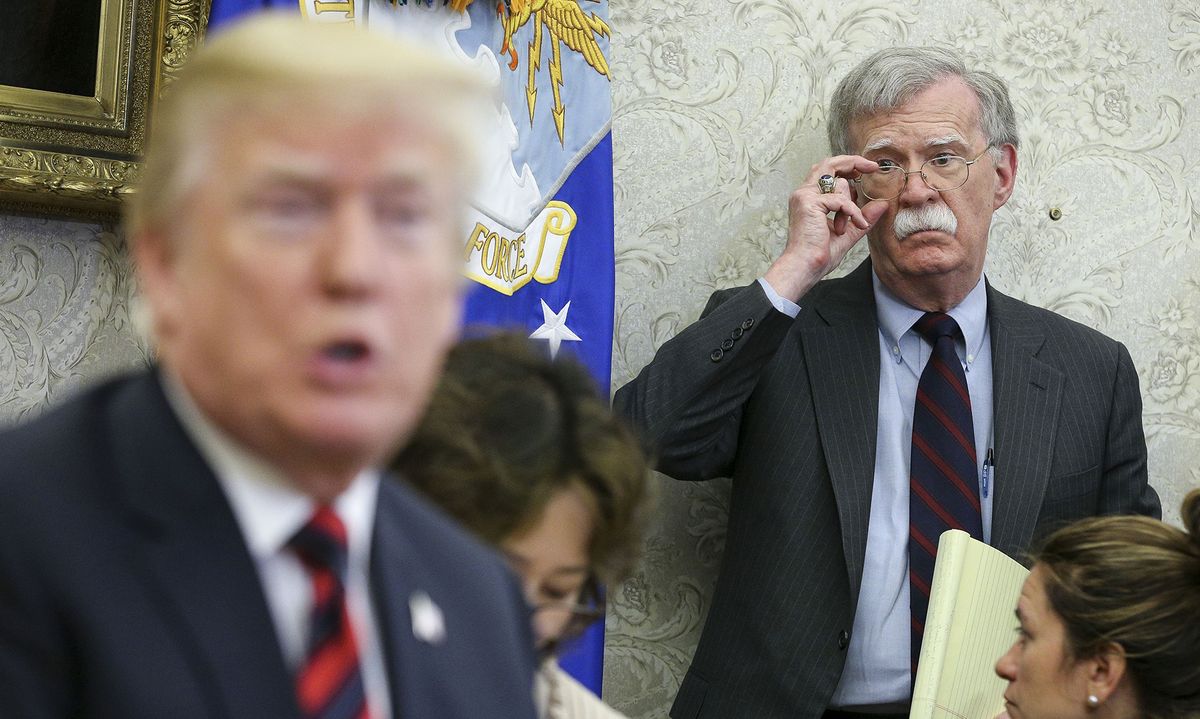 The U.S. government sued to block the publication of a tell-all book by John Bolton, Donald Trump’s former national security adviser, who claims the president was willing to endanger the nation in order to be re-elected.

Bolton’s book — “The Room Where It Happened: A White House Memoir” — is due out on June 23 and has been touted by publisher Simon & Schuster as “the book Donald Trump doesn’t want you to read.”

The U.S. sued in federal court in Washington, arguing that publication of the book would compromise national security. The National Security Council, which had a right to review a manuscript of the book, identified “significant quantities of classified information” that Bolton was asked to remove, according to the complaint. Bolton didn’t wait for the review process to finish before announcing his plan to publish the book, it said.

Bolton spokeswoman Sarah Tinsley declined to comment on the lawsuit.

To get an injunction, the government will have to convince a judge that the book’s publication would endanger national security.

“It’s an incredibly high burden,” Mark Zaid, a lawyer in Washington who has helped authors navigate the pre-publication review process, said in a June 15 interview. “I doubt highly that they would be successful blocking the entire book. But could they block a chapter, a page, a paragraph? Maybe.”

The government accused Bolton of trying to unilaterally decide whether classified information should be made public.

Bolton “struck a bargain with the United States as a condition of his employment in one of the most sensitive and important national security positions in the United States Government and now wants to renege on that bargain,” the government said in the complaint.

“This attempt by the Trump administration to block the publication of John Bolton’s memoir is doomed to fail,” Ben Wizner of the American Civil Liberties Union, said in a statement. “A half-century ago the Supreme Court rejected a similar attempt by the Nixon administration to block the publication of the Pentagon Papers, and since then it has been firmly established that prior restraints on publication are unconstitutional and un-American.”

In a June 10 Wall Street Journal op-ed, Bolton’s lawyer Chuck Cooper said the book went through “perhaps the most extensive and intensive prepublication review in NSC history.” Cooper accused the administration of using “national security as a pretext to censor” Bolton.

Simon & Schuster also backed Bolton, saying in a statement before the lawsuit was filed that it “worked in cooperation with the National Security Council to incorporate changes to the text that addressed NSC concerns. The final, published version of this book reflects those changes.”

The lawsuit sets up a high-profile clash between Trump and his former foreign policy adviser after Bolton quit amid disagreements with the president over foreign policy. Bolton had suggested he had information that hadn’t been provided to House committees investigating the president’s dealings with Ukraine in impeachment hearings. Trump responded by attacking Bolton on Twitter.

Bolton didn’t testify at the impeachment hearings, saying he needed an order from a judge to do so.

“The House committed impeachment malpractice by keeping their prosecution focused narrowly on Ukraine when Trump’s Ukraine-like transgressions existed across the full range of his foreign policy,” Simon & Schuster said in previewing what Bolton wrote in the book. “Bolton documents exactly what those were, and attempts by him and others in the administration to raise alarms about them.”

Trump told reporters on June 15 that it’s “totally inappropriate” for Bolton to publish a book and the former national security adviser would have “criminal problems” if he went ahead.

— With assistance by Jordan Fabian