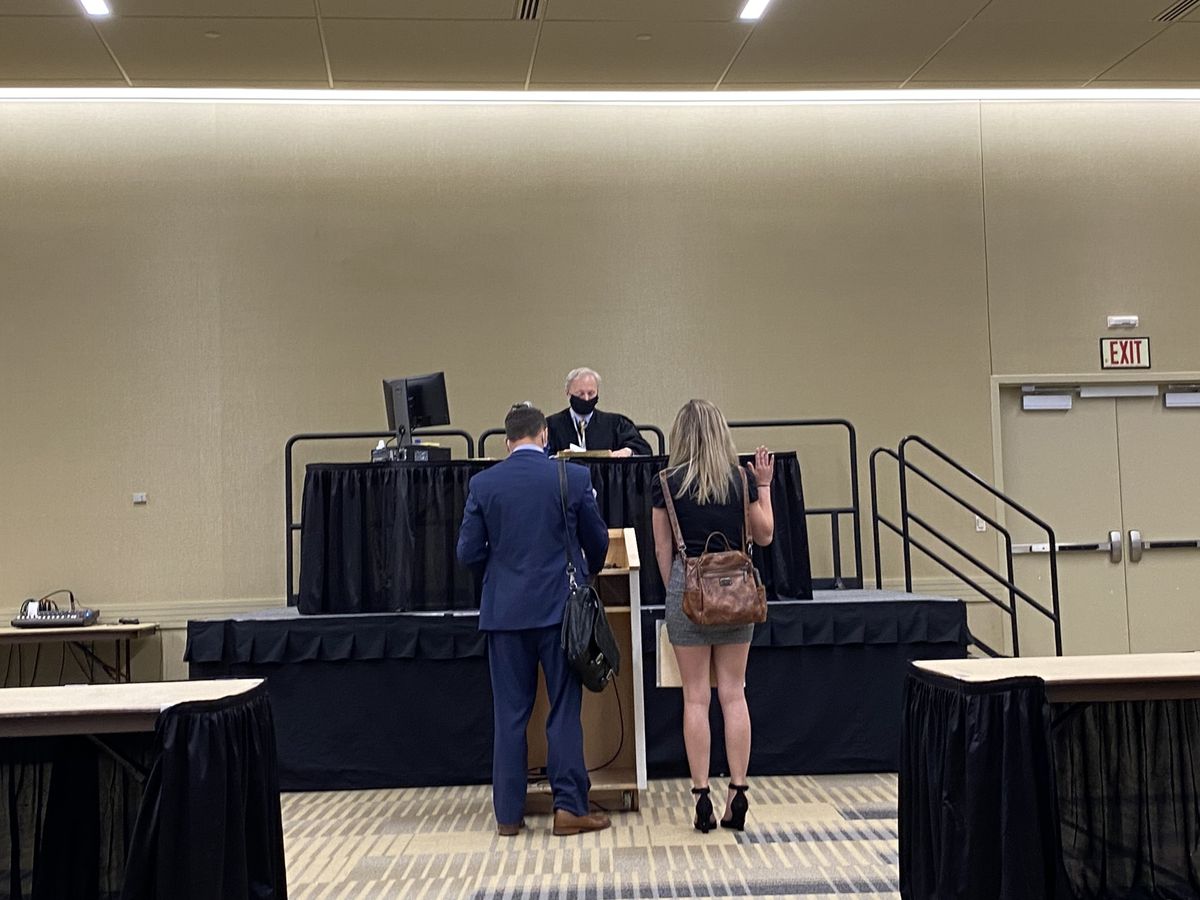 Since September, Jamanda Colbert has lived with her wife and two-year-old daughter in a small apartment complex on Columbus, Ohio’s East Side. The building has its downsides: The apartment is prone to flooding, she says, and the landlord is hard to pin down. Still, the Colberts were settled, with another child on the way. So when Jamanda’s wife, Tera, who is the sole breadwinner for the family, lost her job in February over coronavirus fears, the couple sought to communicate their situation to the landlord right away. The goal was to be conscientious tenants as they coped with what was already taking shape as an unprecedented national crisis.

It didn’t work. The leasing manager at Mason Run Apartments and Ranch-Style Homes served the Colbert family with an eviction notice on May 5. And Jamanda Colbert was summoned to appear for the eviction hearing on June 16 — court, in this case, being the Greater Columbus Convention Center, where the Franklin County Municipal Court has set up shop through at least August.

At the convention center, Colbert passed through scanners for security and body temperature. She followed the blue-arrow path to eviction hearings (other arrows lead to traffic court). She waited for her name to be called. The leasing manager never showed, which means the family has a one-week continuance in the case. The trip wasn’t all for nothing, though. Aid groups have also set up tables at the convention center, and Colbert got an update from one of them.

“All of this time, I’ve been trying to get this emergency assistance,” Colbert says. On June 16, when she was due in housing court, a case manager for IMPACT Community Action — a Columbus nonprofit that is the steward of several million dollars in funds for rental assistance under the federal CARES Act — was also on hand at the convention center. The case manager informed Colbert that she had forwarded the family’s approved application for $3,000 to the leasing manager for confirmation. “We’re behind for March, April, May, June, and we have a late fee for each of those months,” Colbert says. “Our total is $3,009 and some change.”

Welcome to Bloomberg CityLab: A Letter From the Editor

The Accidental Occupation of Seattle

The Racist History of Curfews in America

The High Cost of Bad Sidewalks

As eviction moratoriums lift around the U.S., local courts face steep challenges in resuming everyday court procedures. The continued threat of coronavirus infection makes it dangerous for courts to simply reopen, yet the security needs of a modern courtroom mean that the justice system can’t just conduct hearings en plein air, the way that courts did during the influenza pandemic a century ago. In Ohio, the Franklin County Municipal Court has settled on a stop-gap measure: By adopting the empty convention center, the court has found a space large enough to at least try to practice social distancing while conducting hearings.

Some tenants and advocates see a benefit to the move: The Greater Columbus Convention Center can also accommodate housing and legal aid organizations, making the convention center something of a field hospital for victims of the pandemic’s housing crisis.

Under normal circumstances, the Franklin County Municipal Court processes between 17,000 and 18,000 evictions per year. The courthouse can grind through as many as 250 cases in a single day; tenants take the elevator to the 11th floor for the daily cattle call. “We have one court for the entire county,” says Melissa Benson, managing attorney for the housing team at the Legal Aid Society of Columbus. “The space at the courthouse is very concentrated and very crowded, and one of our big concerns with the court reopening was how they were going to do that safely. You can’t socially distance in an elevator.”

Unlike other states struck by pandemic shutdowns, Ohio never instituted its own moratorium on evictions or foreclosures. The chief justice of the Ohio Supreme Court instead encouraged individuals courts to do so. Benson says that a colleague at the Legal Aid Society, Jyoshu Tsushima, started talking to judges and court staff early in March about the need to pause these hearings. Ultimately, Franklin County was one of the first courts in the state to suspend eviction cases.

That order expired on June 1. About a week before hearings were set to resume, the Franklin County Municipal Court made the decision to decamp for the convention center, where the city has also set up a 1,200-bed surge hospital. As in many cities, the vacant facility serves as a stinging reminder of the price of the pandemic: Columbus has lost some 200,000 hotel-room stays and more than $165 million in tourism and sales as coronavirus restrictions halted events, The Columbus Dispatch reports. Franklin County is the state’s Covid-19 hot spot, and cases have been rising slowly since reopenings began, but so far, the field hospital has gone unused.

At the convention center, the housing court now occupies a space that’s at least four times as large as its old home on the 11th floor of the courthouse. When the court made the jump to the convention center, a number of social service agencies followed. The Legal Aid Society’s tenant advocacy project is there. So is Community Mediation Services of Central Ohio, which helps tenants and landlords arrive at an agreement outside a legal judgment. Among the satellite services are a few different agencies that provide rental aid, including Columbus Urban League as well as IMPACT Community Action, which is responsible for a federal purse of $2.65 million in rental assistance (plus matching grants). Other groups serving families and veterans are there on site, too. The court is set up in part of the convention floor, with waiting areas on one side and nonprofits on the other.

“Parties can come and see what assistance they can get to try and work something out to hopefully prevent homelessness, which is the ultimate goal of most of the agencies that are there,” Benson says. “It’s the last-step intervention.”

Franklin County Municipal Court has shifted over the last few years from one that churns through evictions to more of a community-focused, problem-solving court, Benson says. The fact that the court has invited social services groups to work directly outside the new jury-rigged courtroom is evidence for that, she says. For some, it’s working: When Colbert’s landlord failed to show up for her eviction hearing, she was able to quickly confer with staff at IMPACT to determine whether the landlord had acknowledged the aid she had received. (Still no word from the leasing manager — who also hasn’t returned calls from managers at the new properties where the Colberts are looking to rent. The leasing manager did not return a request for comment.)

The revamped docket still moves at a respectable clip: The court is now hearing up to 100 cases per day. This efficiency has exposed the limits of the assistance that tenants can expect to find at the convention center. Pandemic tenant protections passed by Congress are tested here daily, too.

East Columbus resident Melissa Hudson, a mother of three who lost her job with a cleaning service in March, showed up for her eviction hearing last week hoping to find help. Lawyers were able to clear the eviction from her name, she says. (In Ohio there’s no means of sealing an eviction record, but in Franklin County tenants can ask the court to restrict public access to these records.) Hudson still lost everything — all of her furniture and most of her family’s clothing and belongings. She says she couldn’t get a referral to a furniture bank or even a shelter. They’re all closed due to the pandemic.

Hudson has since found a new apartment for herself and her three (soon to be four) children, thanks in part to the intervention by the Legal Aid Society. But she can’t get assistance with the essentials she’ll need to set up her new home or prepare for a newborn. “They tell you once you get an eviction that the convention center can help you,” Hudson says. “As far as helping with housing, they’re no use for that.”

Benson, the attorney, says that federal dollars under the CARES Act come with a lot of strings attached. The spending is supposed to be sustainable, meaning that IMPACT has to use the money where it will do the most good. In practice, this means that the likelihood that someone with zero income can get any assistance is very low. This stipulation reflects the pre-pandemic thinking about evictions, how routine cash emergencies cause people to miss their rent payment, like a hospital trip or a car repair. “Unfortunately, with Covid-19, that temporary interruption in someone’s income stream that often lands them in eviction court is much less temporary,” Benson says. “It’s months at a time for a lot of people.”

Ultimately, the ways that tenants experience eviction hearings, and even the protections passed by Congress, vary from court to court. For better or worse, in Ohio, every court handles things a bit differently. In Franklin County, for example, the court issued an order that landlords must complete an affidavit that swears they’re not covered under the CARES Act. (The law forbids landlords with mortgages insured or backed by federal entities from pursuing evictions, but it can be difficult for tenants to know whether it applies to them.) Perhaps as a result, some of the most notorious landlords in Columbus have stopped filing evictions. Minneapolis-based New Life Multi-Family Management — which now goes by 5812 Investment Group, and which The Columbus Dispatch named the worst of the city’s 10 most problematic landlords, based on the 123 violation notices the city issued to the company over a two-year period — hasn’t filed a single eviction during the pandemic, according to public records. (The company didn’t respond to a request for comment. Several of their listed properties in Columbus appear on a database of multifamily properties covered by the eviction moratorium under the CARES Act.)

On July 17, the Federal Housing Finance Agency announced that many of the eviction protections under the CARES Act will now run through August. Currently, however, there is no plan to extend the $600-per-week federal boost to unemployment benefits past July. Since March, more than 1,700 households in Columbus have received eviction notices. Later this summer, many more tenants in Columbus and beyond are likely to join their ranks.

Tenants who are struggling face hard decisions about their future. Colbert says her family has the means now to make good on the rent they missed during the shutdown, but the leasing manager isn’t taking calls — not from her, not from her lawyer, and not from new potential landlords who are interested in leasing to them. Even with benefits in hand, emergency aid approved, and her wife’s work resuming, Colbert isn't sure what’s going to happen to her family next.

“Everyone was affected [by the pandemic] in some way,” Colbert says. “It’s not like we weren’t trying to do anything to help.”