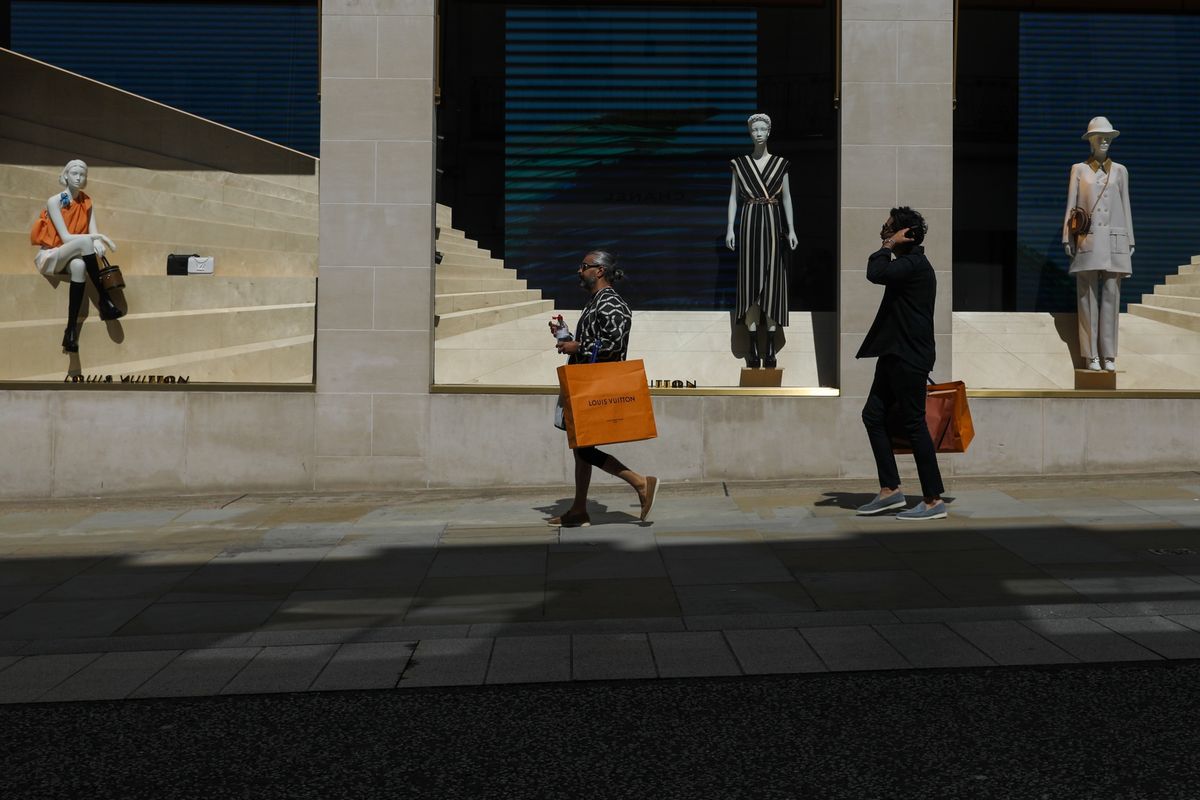 Want the lowdown on European markets? In your inbox before the open, every day. Sign up here.

While both the retail and luxury sectors have suffered less than some other industry groups this year amid fallout from the global pandemic, analysts’ share price goals suggest that the post-virus lockdown recovery may be a long one as consumers adapt to new ways of shopping.

The combined 12-month price target for the Stoxx 600 Retail Index implies just 5.7% upside after an 8.8% drop year-to-date, while luxury bellwether LVMH is seen having 2.4% upside. Fears of second waves of the virus and a resurfacing of tariffs and trade tensions ahead of U.S. presidential elections may also impact sentiment.

“Share prices tend to move in advance of the reality,” says Alasdair McKinnon, lead manager of the Scottish Investment Trust. “Stores that reopen will undoubtedly see some form of pent-up demand or ‘revenge spend.’ However, post this period, more important will be employment trends and consumer confidence.”

The recent reopening of world economies and the strong recovery in the crucial Chinese market offer glimmers of hope, yet the luxury industry — and the retail sector to some extent — also rely heavily on tourism spending, especially in Europe, and analysts don’t expect a fully fledged resumption of travel retail anytime soon.

Here are five things to watch in the sectors for the remainder of the year:

Lockdown created a boom for e-commerce, with stuck-at-home customers going online to buy groceries, clothes, books, accessories, make-up and wine. Shares of Web merchants Zalando SE and Boohoo Group Plc have both soared by more than a third this year. As restrictions ease around the world, some investors say online shopping is here to stay.

“This forced change could lead to permanent change,” said Scottish Investment Trust’s McKinnon. The pandemic means “established practices and habits will be ripped up.”

Peel Hunt sees Asos Plc benefiting from the changing landscape, with its market being boosted as some retail stores disappear. Its shares have held steady this year in the face of the market selloff. In luxury, companies also are being forced to boost online capabilities. This could prompt a rethink of store footprints, as demand for luxury items gets repatriated into domestic markets and away from tourist destinations, in particular European ones, says Swetha Ramachandran, manager of the GAM Global Luxury Brands Fund.

Recent violent protests in the U.S., tensions in the luxury hub of Hong Kong, and last year’s Yellow-Vests demonstrations in France show that social unrest is increasingly a factor to take into account for luxury and retail companies alike.

The virus crisis could make things worse, as global economies fall into recession, according to Luca Solca, an analyst at Sanford C. Bernstein. “There is a very tangible risk that the economic dislocation on the back of Covid-19 leads to escalating social tensions,” further hurting consumer sentiment and corporate profits, Solca said by phone.

France may get a break as the country laps last year’s weak holiday season, which was wrecked by public transport strikes that paralyzed the Paris region for weeks.

While the M&A window closed for a few months, as managers rushed to contain damage caused by the virus rather than focus on deal-making, it could “reopen widely” in 2021, according to Citigroup Inc. analyst Thomas Chauvet.

For now though, the priority for most buyers will be to review deals that have already been agreed, such as LVMH’s planned $16 billion purchase of jeweler Tiffany & Co. and eyewear giant EssilorLuxottica SA’s proposed acquisition of GrandVision NV.

According to GAM’s Ramachandran, luxury players will want to “keep their power dry” for the next six months at least as they grapple with the implications of a potential recession. And for smaller firms that were “weak going into the crisis and weak coming out of it,” it will be very difficult to find a buyer, she said.

Inventory management will be in focus as luxury firms and retailers try to clear products still in stores when they had to shut. Shoppers flocked back to Associated British Foods Plc’s Primark and TK Maxx on the first day they reopened in England, but there was heavy discounting at H&M and Inditex SA’s Zara, according to Jefferies.

“The main inventory challenge retailers will face is how to manage seasonal stock,” said Richard Chamberlain, an analyst at RBC. “Also there are likely to be higher-priced retailers promoting aggressively which will create more price competition for lower-priced retailers.”

RBC sees margin pressure ahead for the retail industry, particularly in the late-summer period. Even luxury-goods makers will suffer from the “immense” inventory overhang and will likely see the “mother of all end-of-season sales” in the next few months, set to damage brand equity, according to Bernstein’s Solca.

With some brick-and-mortar retailers struggling to survive as sales dwindle, property landlords are feeling the knock-on effects due to tenants not being able to keep up with rental payments. British mall-owner Intu Properties Plc collapsed into administration on Friday after failing to agree a reprieve from lenders. Its shares had lost 95% of their value in 2020 before being suspended, while rival Unibail-Rodamco-Westfield is down 65%.

If a tenant fails and has a property in the right location that can have an alternative use, the landlord will be able to find another occupant, according to Tom Walker, co-head of Global Cities at Schroders Plc.