Former federal prosecutor Katie Cherkasky discusses the CHOP zone in Seattle and argues while Americans have the right to protest and assemble, they cannot do it at the expense of business owners’ safety and property values in the area.

The lawsuits are starting to pile up for Seattle Mayor Jenny Durkan over the city's handling of the Capitol Hill Occupied Protest, where a shooting left one man dead earlier in June.

Washington attorney Jacob Bozeman recently filed a suit against Durkan and Washington Gov. Jay Inslee, both Democrats, over CHOP, part of a Seattle neighborhood where protesters calling for racial justice have tried to create a police-free zone.

"Allowing a group of people to say who comes, who goes," Bozeman told FOX Business. "That's a violation of the 1st, 4th and 14th Amendments. … Damage has been done to all the citizens who wanted to exercise their free rights." 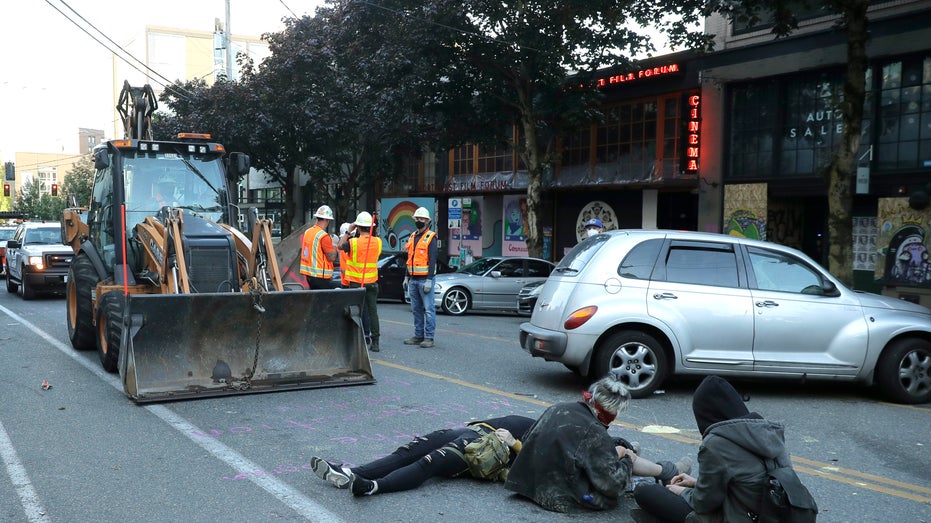 Protesters lie down and sit in the street after workers and heavy equipment from the Seattle Department of Transportation arrived at the the CHOP (Capitol Hill Occupied Protest) zone in Seattle, Friday, June 26, 2020, with the intention of removing b

Roughly 30 people have reached out to him to either thank him or ask to join the lawsuit, Bozeman said. He's practiced law in the area for 29 years.

"What if every special interest group wanted to take over a portion of the city?" Bozeman said.

"I can't understand how anybody could say the mayor and the governor of the state should abdicate their enforcement authority ,… to just give that up to an armed group of people who aren't elected."

"I certainly felt danger, a very well-founded danger of physical violence against me if I were to do anything that wasn't down with the program," he said.

"We intend to review this complaint and respond accordingly," the Seattle City Attorney's Office told KING 5.

In addition to Bozeman's suit, Durkan also faces a class action lawsuit from area businesses who say she and other leaders allowed lawlessness to take over part of Seattle.