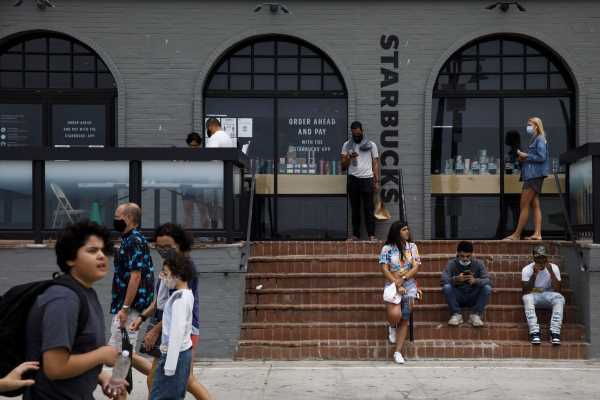 Economists project the Labor Department will report a 3 million increase in payrolls after a surprising 2.5 million gain a month earlier. The back-to-back gains, nonetheless, pale in comparison to the number of jobs lost before that — about 22 million in March and April combined.

The unemployment rate is seen falling only slightly in June, to just over 12% from 13.3%, though the figures could again be complicated by data-collection issues. Even so, the report will likely continue to indicate a long road to recovery for a labor market severely damaged by a deep recession.

The data will be issued Thursday, a day earlier than usual because of the Independence Day holiday.

“The June jobs report will reflect a sweet spot as firms still had sufficient funds to keep workers on payrolls in the beginning of the month, while Covid-19 cases in Sun-Belt states did not start accelerating until later in June. The focus will quickly shift to whether job growth remains sustainable going into the fall.”

Additionally, a phalanx of policy makers in the U.S., the euro zone and the U.K. are scheduled to speak and central banks in Sweden and Colombia hold rate decisions.

Click here for what happened last week and below is our wrap of what else is coming up in the world economy.

Ahead of Thursday’s jobs report, Wednesday sees a raft of other indicators, including the ISM index. The initial unlocking of the economy is set to drive that data up, likely back into expansionary territory, according to Bloomberg Economics, which warns that the survey “will prove to be a poor guide for the level of activity relative to the pre-shock trend.”

Investors will also be watching the latest news from the Federal Reserve. Chairman Jerome Powell is scheduled to testify again in Washington on Tuesday with Treasury Secretary Steven Mnuchin about the stimulus and lending facilities to support the economy in the pandemic. Minutes of the Fed’s latest rate-setting meeting will be released on Wednesday.

The Bank of England’s surprise decision to slow the pace of bond-buying means investors will pay close attention to appearances by policy makers including Governor Andrew Bailey and Chief Economist Andrew Haldane for any clues on future moves.

Sweden’s Riksbank, which just six months ago became the world’s only central bank to engineer an escape from the shackles of sub-zero monetary policy, will show on Wednesday that it’s in no mood to return there. Instead, policy makers are clear that the balance sheet is their primary weapon against recession.

On the data front, inflation figures from key euro-area economies may show a slight uptick in June. That’s unlikely to shift the European Central Bank’s view that policy needs to be loose for an extended period of time. It’s also a key week for Turkish indicators including the trade balance and inflation.

Data on Tuesday will show first-quarter economic growth numbers for sub-Saharan Africa’s no. 2 and 3 economies. South Africa’s recession probably continued, even before the impact of the virus and measures to curb its spread hit output. In Kenya, growth in GDP likely slowed to a three-year low.

Purchasing manager reports from China will be scrutinized on Tuesday for a measure of how th world’s second-largest economy is recovering. Korean export data on Wednesday will give the latest indication of the recovery pace of global trade. The Bank of Japan’s Tankan business survey will likely show Japan Inc. at its gloomiest since the global financial crisis.

On Tuesday, Colombia can be expected to cut its key rate by a half-point to a record low 2.25%. Among the region’s central banks, Peru and Chile are at their lower bound, Brazil and Mexico are all but there, while Colombia may be alone in having room available for monetary stimulus. The post-decision statement and the meeting’s minutes posted Wednesday may provide a roadmap.

On Thursday, Brazil’s industrial output report for May will likely show a slight improvement over April’s 27% year-on-year plunge.