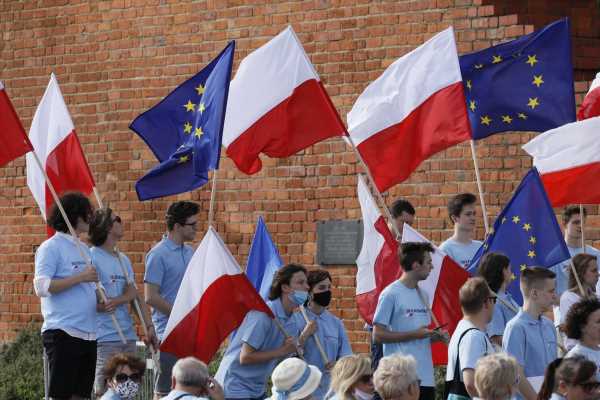 Polish citizens are voting in a presidential election that will determine the fate of the east European country’s nationalist makeover.

After voiding a ballot in May due to the coronavirus pandemic, Poland on Sunday holds the first of an expected two rounds of voting to determine whether to re-elect President Andrzej Duda. Polling stations will close at 9 p.m. (3 p.m. EST), when an exit poll will be published.

The campaign has been tough for the incumbent as the Covid crisis pushes Poland into its first recession in three decades. Leading opposition candidate Rafal Trzaskowski, the mayor of Warsaw, tapped into the discontent with his “We’ve had enough!” rally cry, while Duda turned to familiar tactics when his popularity dipped.

The president picked on gay people, praised Catholic family values and cozied up to Donald Trump. Duda’s Poland is no stranger to divisive politics but as he seeks a second term, the question is whether the us-against-them narrative of the governing Law & Justice party will yield another victory and raise the alarm again for Europe.

The vote is a critical moment for a nation that until recently was hailed as a model of transformation from communism to a thriving democracy. By clashing with the European Union over everything from LGBT rights to the independence of courts and control of the media, Poland turned into a problem child.

Now the country will decide whether the leadership will get carte blanche to complete its project by re-electing a president whose job has been to endorse its power grab. The risk for an EU grappling with the coronavirus pandemic and its economic fallout is that Poland goes the way of Hungary, already seen by many in Brussels as a lost cause.

U.S. think tank Freedom House said that given Poland’s current trajectory, it may not even be considered a functioning democracy by the end of Duda’s potential second term. “If this continues for another five years it’s very likely that Poland will find itself outside the democracy category,” said Zselyke Csaky, a Freedom House research director.

The vote is Duda’s to lose. Polls show he still has a healthy lead and should win the first round, followed by Trzaskowski. If no candidate wins at least half of the votes on Sunday, polling for a run-off — slated for July 12 — suggests the result would be too close to call.

Duda has accused the LGBT community of threatening Polish families and championed the government’s social-security handouts. This week, he visited the White House for talks with Trump. The American president has praised Warsaw’s spending on military equipment and the drive to chart its own “Poland first” path within the EU.

While the meeting failed to produce a sweeping defense agreement long advocated by Poland, public television hailed the visit as a resounding success and a turning point in the country’s history.

The network — the main source of news for many Poles — has “abandoned any pretence of being a public-service broadcaster” in the run-up to the election, acting almost exclusively as the mouthpiece of the government and of the president, according to global media watchdog Reporters Without Borders.

A Duda loss would jeopardize Law & Justice’s ability to push through some legislation. The party has enough seats in parliament to pass laws, though not enough to override a presidential veto.

The party built power by attacking “corrupt elites” and promising a fairer, safer country for ordinary citizens after decades of fast-paced changes following communism. But its five-year rule has been marred by unprecedented EU lawsuits detailing how it’s eroding democratic values and removing the checks and balances on its power.

The Covid crisis disrupted the ruling party’s narrative as frustration rises along with unemployment. Voter expectations for government relief are growing and exposing the limits of the party’s media machine.

“The masks have fallen,” said Adam Bodnar, Poland’s ombudsman for human rights. “The line dividing those in power and the rest of the society is much clearer.”