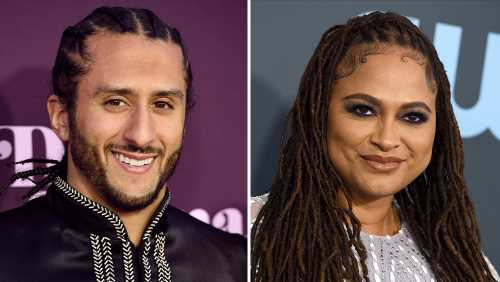 Despite its platitudes, the NFL has still yet to offer former superstar quarterback Colin Kaepernick a deal to return to play. However, the activist athlete has now snapped a whole new kind of game by officially teaming up with Ava DuVernay for a limited series on Netflix.

Long-time friends and campaigners-in-arms for social justice, the When They See Us filmmaker and the outspoken ex-San Francisco 49ers QB will collaborate on the scripted six-parter Colin in Black & White. Focused on Kaepernick’s teenage years and early football, basketball and baseball successes in Turlock, California, the Michael Starrbury penned limited series will put particular emphasis on the influences and circumstances that developed the social and cultural conscience of the young man adopted by a white family.

Having found himself shunned by the NFL since 2016 after kneeling during the national anthem as a protest against police violence, Kaepernick is set to narrate Colin in Black & White. Also working on a self-published memoir, the once and perhaps future NFL star will also executive produce the series with Emmy nominated When They See Us alum DuVernay and Starrbury.

With scripts completed last month, the ambitious project is aiming to start shooting in the fall, I hear – if possible with the ongoing coronavirus pandemic. Colin in Black & White is a Netflix Original Production, with DuVernay’s ARRAY producing too. No word yet if the very busy DuVernay will direct on the high profile and long rumored project.

Regardless, there is no doubt DuVernay has made Colin in Black & White a top priority.

“With his act of protest, Colin Kaepernick ignited a national conversation about race and justice with far-reaching consequences for football, culture and for him, personally,” declared DuVernay in a statement today as Colin in Black & White was made public.  “Colin’s story has much to say about identity, sports and the enduring spirit of protest and resilience. I couldn’t be happier than to tell this story with the team at Netflix,” the recently elected AMPAS Board of Governors member added of her return to the streamer home of 13th, When They See Us and an upcoming documentary on late, great Nipsey Hussle

The love was returned by Kaepernick, who DuVernay took a very public stance of support for back in February of 2019. Just hours before Super Bowl LIII kicked off, the Selma helmer said she would be shunning the big game “in protest” over the NFL’s “racist treatment” of the ex-QB.

“Too often we see race and Black stories portrayed through a white lens,” Kaepernick said today of working with DuVernay on Colin in Back & White. “We seek to give new perspective to the differing realities that Black people face. We explore the racial conflicts I faced as an adopted Black man in a white community, during my high school years,” he added. “It’s an honor to bring these stories to life in collaboration with Ava for the world to see.”

“We’re proud to bring Colin’s experience and his creative vision to life as he joins Ava to share his powerful story and message with all our members around the world,” proclaimed Netflix’s VP, Original Content Cindy Holland of the official Kaepernick and DuVernay partnership. “It is an unparalleled union of two strong and defining voices coming together to tell the story about what it’s like to be Black in America.”

Against the current landscape of an America perhaps poised for real change in response to the killing of George Floyd on Memorial Day by Minneapolis cops, Colin in Black & White is a coming together of another sort too.

DuVernay and Starrbury were nominated for their shared writing efforts on Netflix’s When They See Us last year. With that and 15 other nominations for the show, WTSU’s Jharrel Jerome brought home the Primetime Emmy for Outstanding Lead Actor in a Limited Series or Movie for his performance as the wrongly convicted Korey Wise in September 2019. Earlier this month, the acclaimed and well watched Netflix series about the miscarriage of justice against the young men labelled the Central Park 5 back in 1989 picked up a Peabody Award.