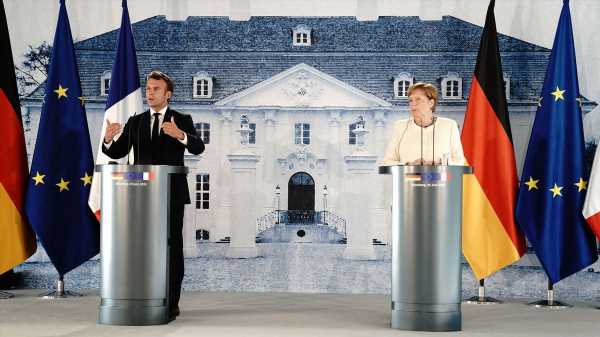 German Chancellor Angela Merkel made a pitch for a radical recovery proposal for the virus-ravaged European Union and warned her cohorts that there was no time to lose.

Her words carried extra weigh, spoken in person on Monday alongside Emmanuel Macron. The French president is the other heavyweight in the euro. He is a long-term advocate of ever-closer collaboration for a common position on international relations and a joint fiscal policy.

Germany has always been the more reluctant partner on both fronts, but there are signs the famously cautious Merkel is letting up.

“Talks won’t fail because of us,” Merkel told reporters in Meseberg, Germany. “But there will be no new proposal.”

Merkel’s exhortation comes before all 27 EU members gather in Brussels on July 17 to discuss a stimulus package that would see the bloc issue 750 billion euros ($845 billion) in joint debt and make 500 billion euros of that in grants to the nations most affected by the coronavirus crisis.

The plan, which needs the unanimous approval of all EU members, seeks to tackle divergences in the region’s internal market that have widened as a result of the uneven impact of the outbreak and differing national responses.

Merkel’s remarks echoed concerns voiced by European Central Bank President Christine Lagarde, who told EU leaders this month that the recent calm in financial markets is in part because investors have priced in action from governments. If they fail to reach a timely agreement on funding the recovery, then sentiment could shift, according to officials familiar with her comments.

“We have reached a moment of truth for Europe,” Macron said. “With this resolute Franco-German commitment, we can turn it into a moment of success.”

The proposal faces opposition from budget hardliners including Austria, Denmark, the Netherlands and Sweden, who want the size of the facility to be smaller, fewer grants to be offered and strong conditions tied to any disbursements.

The Danish government has said that its top priority in the negotiations is to retain the rebate it gets from contributions to the EU budget, indicating a possible avenue toward a compromise. Denmark, along with Austria, the Netherlands and Sweden, are all net payers into the budget, and received rebates totaling more than 1 billion euros in the previous spending plan. Those perks won’t necessarily carry over into the next budget.

The aid program would offer support to the region’s hardest-hit economies like Spain, Italy and Greece, which are projected to shrink by almost 10% this year. These countries have also been constrained by dangerously high debt levels while their peers in the North have been able to use national budgets straight away to support companies and workers.

Italy, Spain and Poland would be the biggest beneficiaries to the grants under the initial European Commission proposal, according to estimates by the bloc’s executive seen by Bloomberg.

— With assistance by Viktoria Dendrinou