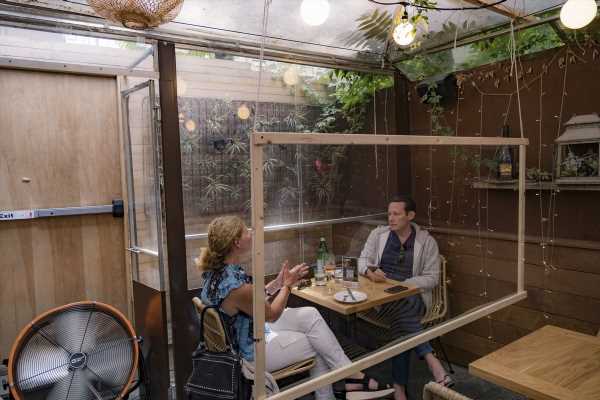 Governor Phil Murphy said he would pause New Jersey’s plans to restart indoor dining on July 2, citing concerns about such a “sedentary” activity especially among “outlier” bars and restaurants not following social distancing.

This “brings me no joy to do this, but we have no choice,” Murphy said, pointing to both a national spike in Covid-19 cases and the lack of social distancing in New Jersey and New York City. No new date was scheduled for New Jersey restaurants to reopen, though casinos will do as planned on July 2, as will museums, libraries and arcades.

New Jersey indoor dining, with capacity caps and other restrictions, had been scheduled to restart four days before New York City was to do so. But New York Mayor Bill de Blasio and New York Governor Andrew Cuomo on Monday said skyrocketing cases in the South and West have prompted them to consider postponing dining’s return.

De Blasio cited surges of the virus in Texas, Florida and California as reasons to consider a slowdown in reopening restaurants, even at 50% capacity. The mayor said the city and state will make a decision within “the next few days,” as health officials are “paying attention to this lesson. We’re increasingly concerned.”

“Around the country, a number of cities and states have been moving in the wrong direction,” de Blasio said. “We all love indoor dining, but we see problems with indoor dining.”

Cuomo expressed similar concerns during a Monday news briefing. But he also directed criticism at New York City leaders and residents, saying the most populous U.S. city has had problems enforcing social distancing as people congregate.

The city’s second phase of reopening has permitted more than 5,000 restaurants to set up outdoor dining on sidewalks, patios and curb-side parking spaces, but the limited seating comes nowhere close to returning the industry to where it stood before the Covid-19 pandemic forced a citywide shutdown in March.

Studies have found the virus spreads more easily indoors and particularly among diners in restaurants. Epidemiologists have said that in some restaurants, the virus has been transmitted as it moves through an interior space via air conditioning or cooling fans.

Cuomo agreed with de Blasio that viral outbreaks continuing in 32 states are alarming and provide a good reason to slow down the city’s move toward reopening its restaurant industry.

The governor also blamed the continuing spread on President Donald Trump, who Cuomo said “has been in denial about the virus from the get-go.” He called on Trump to “step up” and issue a national order for people to wear masks in public.

New York has improved to the point where it recorded a three-day average of just eight Covid-19-related deaths on Sunday, its lowest since the peak in April.

In New Jersey, the state reported 13,138 fatalities with tests that confirmed Covid-19 as a cause of death. Another 1,854 dead were considered probable for a coronavirus link, although they weren’t tested, according to health officials. In all, 171,272 New Jerseyans have tested positive for the virus, though well over 1 million of 9 million residents have had negative results.