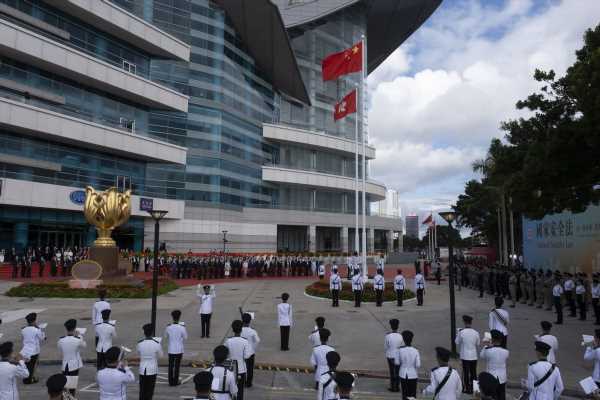 After more than five weeks of waiting, the business world is getting its first real look at the controversial national security law that will shape Hong Kong’s future as a financial hub.

Big questions still remain about how China’s Communist Party will wield its new powers in the former British colony, but the law’s public unveiling on Tuesday provides some clues. Here are some early takeaways from investors, bankers, economists and business leaders:

The comments below, from people with capital and livelihoods at stake in Hong Kong, have been lightly edited and condensed.

The central government is telling us to just stay out of politics. Build the economy, innovate, build up livelihoods, build bigger flats for people to live in, add more land, but stay away from politics. We can still criticize the government, but probably on livelihood issues, infrastructure projects, how they do on quality of life. In terms of freedom of speech, that is something that is very much on peoples’ minds. I don’t think they’re going to use the law indiscriminately. I do believe they’re going to use it in very rare occasions.

I’m not going to get involved in the politics. Clearly, we support all of our colleagues and clients across Asia and in China and in Hong Kong. It’s a very difficult political situation. We’ve not made a statement, we’re not going to make a statement. We’re a major British bank. We need to be very cognizant of what’s going on in the U.K. and the position taken by the U.K. government. But we’re not going to get involved in the politics of Hong Kong.

I do feel this will add to the complexity of working in Hong Kong or operating out of Hong Kong. As an investor, what you do with all this complexity is to add a bit more of a risk premium when it comes to that market. Longer term, it could be possible you see more international firms and investors based out of Asian markets instead of Hong Kong being the central hub.

But I think Hong Kong is still very, very relevant and it is the hub to have access to China, which is an enormous market. We attend conferences in Hong Kong almost annually, except this year. We want to see and feel all the companies over there. I don’t think that will go away.

Law Ka-chung, adjunct professor at City University of Hong Kong and former Bank of Communications (Hong Kong) economist who said he was asked to leave the role in part due to his views on the impact of Hong Kong’s protests

It is not only about the law itself. It is more about how the world sees “two systems.” Now the world believes there is only “one system”, and that Hong Kong is no longer a free capitalism market. That will accelerate capital outflow and foreign capital flight.

Investment aside, doing business through Hong Kong is also going to be hit hard, with the U.S., EU, India, Japan, Australia and many countries seeking to “de-China.” Hong Kong used to be the springboard for them to eventually go into China and provided financial services in-between. This formula no longer works.

The feeling is that, all of a sudden, the one country, two systems arrangement has disappeared and Hong Kong is truly just another part of China. What the U.S. is doing in response right now is inevitable because they would be worried about the technology being transferred into China or falling into the wrong hands. It will definitely impact our research and development efforts, including even civilian or academic research.

Investment from international companies in Hong Kong for data centers and network infrastructure and so on will be hampered. Fintech companies or other kinds of technology companies will really worry about the future for Hong Kong and whether or not they might have to consider moving some of the operations to other parts of the world. It’s ironic that passing this national security law may make the international community feel that Hong Kong is less secure.

For investors, it means that there is clarity to the situation. Although this might not sound like a positive in terms of how a westerner or outsider views this law, it at least addresses how China will deal with the situation and that the stability of the city is paramount. For companies it will also be similar too, in that they can operate knowing that their security will be solid.

It will be criticized as some kind of suppression to freedom, yet at least it brings about some level of stability that was once totally taken for granted in Hong Kong.

In the short run, businesses in Hong Kong may feel some respite if violent protests subside. In the long run, the law will most likely embolden Beijing and local allies to put greater political pressure on companies and their employees to closely adhere to the Beijing’s agenda.

In the mainland, Beijing applies national security laws fairly arbitrarily and selectively. It’s quite possible that CEOs, or any business leaders in Hong Kong who supported the protests, could become targets if Chinese authorities want to prioritize such prosecutions. However, for the moment, no one knows how the authorities will use the law — whether they will merely target people who engaged in violent actions against police or whether they their targets will be much broader against Hong Kong’s cultural and business leaders. The lack of clarity on Beijing’s true intentions is, quite frankly, one factor of uncertainty.

The market has fully changed hands to reflect the impact of the law back when it was first announced — the people who panicked and sold then have been replaced by those well aware of the risks and still prepared to participate, and they will not easily flee now. Even if it does affect sentiment within a day or two, the appetite from southbound funds for Hong Kong-listed new economy firms is still immense and mainland funds will likely buy up dips. The impact of the details of the law are limited as nothing comes completely unexpected.

Since last June, the protests and violent incidents have severely hurt the Hong Kong tourism industry. The passage of this new law will help to deter violent events in the future. It will have positive effect in restoring tourists’ confidence.

In the past year, tourists come to Hong Kong not knowing whether the roads would be blocked, the subway would be stopped, or the shops would be set on fire. The security law will significantly reduce the violence we once saw in the city. And it will help solve the trust crisis between mainlanders and Hongkongers.

In the stock market, I don’t think we should reasonably expect anything extreme. What panic or precautionary selling there was locally, southbound funds were more than eager to pick up, and the law has no material impact on the Chinese tech stocks, the most active part of the Hong Kong market now, and even the funds that exit might only be sitting it out for the short term.

The social reaction from the law, the push back on the ground — has been far softer than expected, and the so-called retaliation from the U.S. Has been a mere pleasantry. It would seem that after this point the U.S. has little drive to impose sanctions on something that is already enacted. It just wouldn’t make sense to fixate on this in the coming months when they have so much on their hands.

After the introduction of the National Security Law, some foreign visitors may come to Hong Kong less frequently. U.S. residents may feel reluctant to visit Hong Kong, especially if the U.S. retaliates against Hong Kong or the U.S.-China confrontation escalates.

We will likely see fewer protesters on the street driven by impulse. The law will be very serious, and the consequence will be very tough. Except those who really don’t fear going into jail, most of the protesters will not go out as much.

But we are much more afraid of the pandemic than the security law. The pandemic kills our businesses, while the security law only affects a small group of people who breach the law. For Hong Kong tourism to return to the heydays of the past, we will need at least one or two years. Before that, we just have to tighten our belt and try to survive.

I think unfortunately there’s a bit of a perfect storm at the moment because we’ve got not only the national security law but we’ve also got Trump and Congress threatening to remove the special status. It really puts a big ceiling on Hong Kong’s growth.

Instead of the tremendous growth we’ve seen, there are going to be people going the other way as well — major companies saying we’ll have more people in Singapore instead of Hong Kong, people deciding now is the time to move out.

The next phase will be how far the U.S. is willing to go in terms sanctioning Chinese officials involved in drafting the security law, and their dealings with Chinese and U.S. and foreign financial institutions.

Chinese banks have less than 50 percent of their dollar liabilities—outstanding $ debt and other obligations—covered by dollar deposits. Foreign banks however, especially those with large dollar lending exposure in Hong Kong—e.g. Citigroup and HSBC—also have a lower coverage by Hong Kong domiciled dollar deposits.

The so-called ‘mismatch’ between dollar assets and liabilities is one of the key risks to Hong Kong and global markets. If sanctions on Chinese banks listed in Hong Kong causes a local dollar funding squeeze, then markets will reprice risk of all banks with high Hong Kong exposure.

There might be some volatility as Hong Kong stocks resume trading. But for both stock markets the bigger driver would be the pace of China’s economic recovery and liquidity conditions, rather than Sino-U.S. relations that people have grown weary of. I’m not going to change my Hong Kong positions just because of the security law.

It will serve more as a deterrent to separatists who dare to challenge China’s sovereignty, it doesn’t mean that the PLA will take over Hong Kong. I think China will be quite flexible in actual implementation.