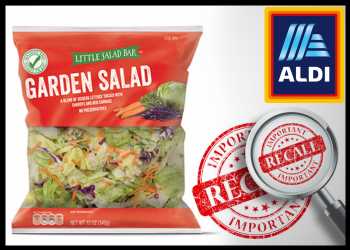 The recall follows an investigation by the U. S. health officials, including the FDA, Centers for Disease Control and Prevention as well as state and local partners, about a multistate outbreak of Cyclospora infections potentially linked to bagged salad products sold by three retailers.

The investigation was initiated following 76 confirmed cases of Cyclospora including 16 hospitalizations between May 11 and June 14.

According to the FDA, Cyclospora cayetanensis is a parasite. Food or water contaminated with it can cause an intestinal illness called cyclosporiasis. It is generally transmitted when infected feces contaminate food or water, and is unlikely to be transmitted directly from person to person.

ALDI’s recall, in association with Fresh Express Inc., affects all product codes of ALDI Little Salad Bar Garden Salads with use-by dates of May 16 to July 04. The affected products were distributed in the states of Arkansas, Illinois, Iowa, Indiana, Michigan, Minnesota, Missouri, North Dakota, South Dakota and Wisconsin between May 1 and June 19.

ALDI, with nearly 2,000 stores across 36 states, has removed the recalled salad from select stores as a precautionary measure, and also urged customers to discard them immediately.

Hy-Vee also recalled its Hy-Vee Bagged Garden Salad product, though has not received reports of any related illness.