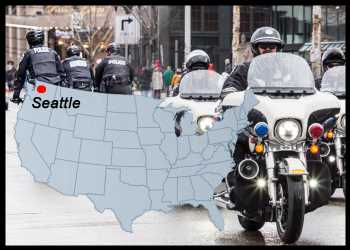 “I support peaceful demonstrations, Black Lives Matter, and I too want to help propel this movement forward … but enough is enough,” Seattle police chief Carmen Best said at a news conference.

“Our job is to protect and to serve the community, our job is to support peaceful demonstrations, but what has happened here … is lawless, and it is brutal, and bottom line it is simply unacceptable,” he told reporters.

The order and police action put to end weeks of violence in and around the Capitol Hill Occupied Protest zone where demonstrators gathered to protest the death of George Floyd in police custody.

The zone, covering six city blocks and a park, was established on June 8 by the protesters after the Police abandoned the East Precinct station house following standoffs and clashes with demonstrators.

A series of late-night shootings this week killed two teenagers and injured many others.

At a White House briefing, Press Secretary Kayleigh McEnany said that Seattle has been liberated. She described the bloody protest “a failed four-week Democrat experiment by the radical left.”