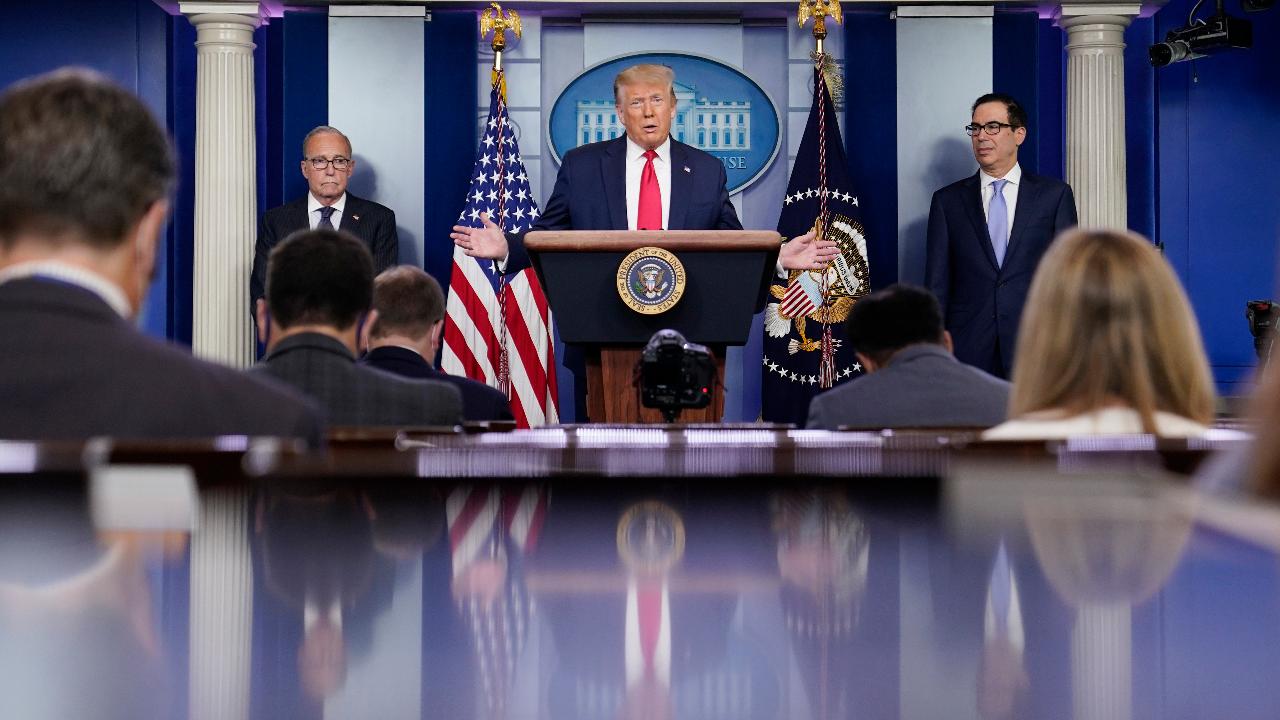 President Trump took a victory lap touting strong jobs numbers on Thursday morning with a press briefing at the White House, in which he alluded to work on a "phase four" coronavirus relief bill, saying that payroll tax cuts might be included in the legislation.

Trump, riding high on 4.8 million jobs added to the economy and unemployment that fell to 11.1 percent — both better than expectations — said the apparent recovery "is the result of historic actions" his administration took, in conjunction with Congress.

The "phase 3" relief bill was the historically large $2.2 trillion CARES Act, which was passed in late March.

"We're working on a 'phase four.' We're working with Congress," Trump said. "Work has started. Steve Mnuchin can give you a little briefing. Talking about payroll tax cuts, we're talking about more money being infused. And it comes back to us."

UNEMPLOYMENT RATE DROPS TO 11.1% IN JUNE AS JOB GROWTH BLOWS PAST EXPECTATIONS WITH 4.8M ADDED

Trump has tossed around the idea of a payroll tax cut in response to the coronavirus for months, but it was put on hold due to likely resistance from congressional Democrats.

The president in the briefing lauded the effectiveness of certain elements of the CARES Act, including the highly-popular Paycheck Protection Program (PPP).

"Through the Paycheck Protection Program we've extended over $520 billion in loans to nearly 5 million small businesses, saving and supporting the jobs of tens of millions of American workers," Trump said. "This has been a tremendous success."

"We also rushed urgently needed relief to millions and millions of hardworking taxpayers," he said, in reference to stimulus checks sent to Americans. "They got that directly."

The House of Representatives on Wednesday passed an extension of the PPP a day after a procedural stunt by Democrats in the Senate resulted in the bill surprisingly passing the Senate by unanimous consent. Sen. Rick Scott, R-Fla., Tuesday night expressed reservations and tried to change Democrats PPP bill, but Sen. Ben Cardin, D-Md., objected. Democrats asked for unanimous consent to pass the bill, and no Republican objected, concerned about being seen as standing in the way of the popular proposal.

The House's passage of the PPP extension Wednesday sent the bill to Trump's desk. He has yet to sign it.