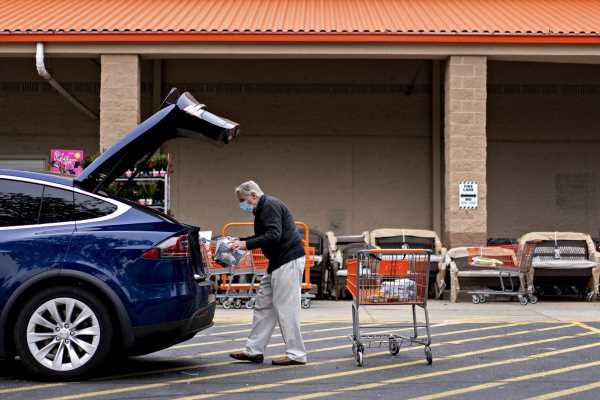 With a resurgence of the coronavirus threatening a nascent rebound of the U.S. economy, the White House and Congress are under increased pressure to come to terms on another round of stimulus.

What the next stimulus bill will look like is very much an open question. House Democrats packed a comprehensive list of demands into a $3.5 trillion measure passed in May. Senate Republicans have dismissed that plan and are discussing a package of as much as $1 trillion in total spending.

Negotiations won’t begin in earnest until the Senate returns from recess on July 20.

Economic data over the next month, including Thursday’s jobs report, will shape much of the debate in Washington.

“Any phase four economic package must prioritize pro-growth economic measures that incentivize employers and our great American work force for re-employment and a return to the labor market,” Judd Deere, a White House spokesman, said in an email.

Most of the discussion in Congress and the Trump administration about the next round of relief has focused on several key items: Additional aid for businesses and the unemployed; another round of checks to individuals; liability limits for employers; health care and infrastructure funding; and aid to state and local governments.

Here’s the state of play on the leading stimulus proposals:

There already is plenty of bipartisan support for the Small Business Administration’s Paycheck Protection Program, which is designed to forestall job cuts at small businesses struggling during the pandemic.

Senator Susan Collins, a Maine Republican, said Wednesday that bipartisan negotiators are close to a deal on a second round for the program with some adjustments.

Senate Small Business Committee Chairman Marco Rubio, a Florida Republican, is reconvening the task force that helped create the PPP to come up with a plan that would expand the use of funds, including allowing chambers of commerce to apply, setting aside $25 billion for businesses with fewer than 10 employees. Rubio also said he’s considering adding more PPP funding to help minority-owned businesses and other firms in “under-served communities.”

Ben Cardin of Maryland, the top Democrat on the committee, and other Senate Democrats have introduced a bill that would extend the PPP application deadline to Dec. 31 or longer while creating a new option for a second loan for borrowers with fewer than 100 employees that have lost at least half their revenue because of the pandemic.

There are also proposals for tax incentives to stimulate demand such as for travel and restaurant meals. President Donald Trump has said he favors such incentives, but diving into tax law would complicate the legislation.

The most difficult talks will be over whether to extend a $600-per- week boost to unemployment benefits approved by Congress in March that expires July 31. Democrats have sought to extend it into next year with possible phase-outs linked to improving state economic numbers.

Congressional Progressive Caucus Chair Pramila Jayapal said Wednesday that the top priority for liberals is expanding that and other benefits for the jobless.

But Republicans contend that in many parts of the country, the boost is providing a perverse incentive for workers to remain unemployed since they earn more when out of work.

Senate Majority Leader Mitch McConnell on Tuesday called the bonus “a mistake,” while saying there should be “adequate” benefits for the unemployed. The White House also is opposed to the bigger payment.

Some Republicans suggest that one possible solution could be to cut the added amount to $200 or less.

“The way forward is some kind of compromise. The amount was just way too much,” said North Dakota Senator Kevin Cramer.

Senator Rob Portman, an Ohio Republican, is proposing providing a $450 weekly bonus for individuals who return to work. Portman argues that will ensure there are fewer instances where staying on unemployment is more lucrative than working.

As a counter-point, Senate Minority Leader Chuck Schumer and Democratic Senator Ron Wyden of Oregon this week offered up an expansive and permanent change to the unemployment benefits system. They would provide the $600 boost until a state’s three-month average total unemployment rate falls below 11%. The benefit amount would reduce by $100 for every percentage point decrease in the state’s unemployment rate, until the rate falls below 6%.

Trump on Wednesday endorsed the idea, telling Fox Business, “I want the money to get there quickly and in a non-complicated fashion.” And the amount, he said, should be larger than what Democrats have proposed, though he wasn’t specific.

That aligns him with liberal Democrats, who have also proposed government-funded hazard pay for essential workers and direct housing assistance, which should ease the way for it to be included.

Yet some of Trump’s most conservative allies like Ted Yoho of Florida said this week they want no more relief spending at all. Treasury Secretary Steven Mnuchin has called for a “more targeted” approach. Lawmakers said the final bill could tighten provisions to restrict it to low-income individuals or a requirement that applicants show income losses to get the aid.

Texas Senator John Cornyn, who is drafting the liability language for release in July, said in an interview this month that it would allow employers to choose which government coronavirus safety guidelines to follow in order to be shielded from lawsuits if their customers or workers contract the virus.

Employers could look to the best available guidance, whether it be from the federal Centers for Disease Control and Prevention or a different federal, state or local governmental entity. Cornyn said there are conflicts among the safe-practices guidelines available to employers, and that companies should be allowed to make their own determination.

The White House also is behind liability limits.

House Speaker Nancy Pelosi and Schumer have said they won’t agree to a lawsuit immunity provision for employers that is crafted too broadly. They are seeking to prod the administration to issue detailed Covid-19 guidance to employers on how to safely protect their workers.

Democrats in both chambers state and local governments need about $1 trillion in aid, about the same amount Republicans say they’re willing to spend on an overall stimulus plan. They are backed by many governors and mayors, who’ve warned that millions of public employees, including essential workers, could lose their jobs because tax revenue has fallen while expenses have risen.

Republicans, particularly McConnell, have suggested such aid would amount to a gift to Democrat-led states that were facing budget pressures even before the pandemic.

The White House has opened the door to some state aid, specifically for expenses directly related to the pandemic, but has indicated it doesn’t want the measures to turn into a rescue for states with pre-existing financial pressures, such as pension shortfalls.

“I don’t think the Republicans want to be in a position where they bail out states that are, that have been mismanaged over a long period of time,” Trump told the New York Post in May.

The bill is likely to have some provisions to finance direct efforts to fight the Covid-19 pandemic but the shape of that is very much in dispute. Pelosi has called for a massive expansion of testing and contact tracing as well as a national response plan and the House bill has $75 billion for this effort.

Senator Roy Blunt of Missouri is taking the lead in crafting a Republican proposal for this aspect of the bill. He said Wednesday that the stimulus legislation would contain a robust health care section that addresses testing and vaccine development.

“We are going to be asking what kind of money do you need once you have vaccines particularly and tests and therapeutics as well that they are generally free and fairly available to people” he said.

Portman said the recent jump in cases in many states has more Republicans embracing the idea of strong infusion of funds into health care. “There’s a realization that we need to do more,” he said.

While there has been much enthusiasm -- expressed by Trump and others -- of putting infrastructure spending in the next round of virus relief, that is appearing less and less likely to be included. Some Republicans argue the economic benefits of spending on projects such as roads and broadband, would be too slow to give the economy the quick jolt needed.