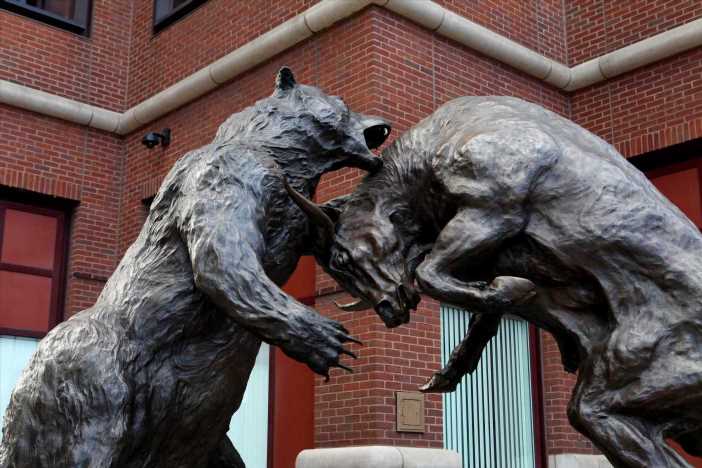 Global equities will be roughly unchanged from their current position this time next year as bullish and bearish forces cancel each other out, according to Citi strategists.

In its quarterly global equity report, the bank's strategists said Monday they would not be chasing markets higher from current levels, but would prefer to wait for the next dip. Citi remains overweight in U.S. and emerging-market equities and has retained a "defensive tilt" to its sector strategy.

Defensive stocks are those that typically provide consistent dividends to shareholders and relatively stable earnings, irrespective of the health of the broader economy.

"Global central banks are likely to buy $6 trillion of financial assets over the next 12 months, over twice previous peaks," Citi analysts said in the note.

Citi has compiled its own checklist of 18 items to identify if global equities are about to enter a bear market period.

"The global economy is showing further signs of recovery from the lockdown. Our Bear Market Checklist still shows only 6.5/18 red flags," the analysts said.

However, they cited the continued vulnerability of the global economy to rising Covid-19 infections and excessive earnings optimism as downside risks that will likely cancel the optimism stemming from a potential recovery and massive central bank stimulus.

"We think the bottom-up global EPS (earnings per share) consensus for end-2021 is 30% too high, suggesting that global equities are actually trading on a demanding 24x P/E (price-earnings ratio), not a more reasonable 17x," the note added.

The closely watched P/E ratio is a company's current share price divided by its earnings per share.

While the U.S. has seen a broad escalation of new virus cases, dampening some of the optimism surrounding a possible economic recovery, small secondary surges in other major economies like China and Germany have been mostly addressed by the localized reintroduction of lockdown measures.

Speaking to CNBC on Monday, RBC Capital Markets global macro strategist Peter Schaffrik said the big question markets would like an answer to is whether these measures are effective.

"If they work, you can continue to reopen some parts of the rest of the economy while still fighting coronavirus on the other hand, and on top of that of course, you have all this largesse (from governments and central banks)," Schaffrik told CNBC's "Squawk Box Europe."

Defensives to take the reins

Schaffrik's comments echo the sentiment of analysts at Longview Economics, who on Monday retained a neutral view on global equity markets, highlighting several reasons for investors to err on the side of caution and also signaling a move toward defensive stocks.

First, much of the "good news" is already priced in, according to Longview CEO and chief market strategist Chris Watling.

"The bounce in U.S. and global economic activity has been remarkably strong — illustrated, for example, by the U.S. Citi Economic Surprise Index, which has reached its highest level on record," Watling said.

Second, the recent rally in cyclical stocks, which tend to track economic performance, has not been confirmed by the rise in bond yields that usually accompanies outperformance of cyclical sectors, which Watling suggested raises questions about the rally's sustainability.

Longview strategists also believe that leading growth stocks, such as the U.S. tech giants, are now overbought and that defensive sectors are more attractive, but strong gains in equity markets are not typically led by defensive sectors, Watling argued.

"Having started to consolidate gains on 8th June, we expect that consolidation to continue at least until some market timing models begin to move onto BUY (i.e. begin to suggest that some fear is priced into markets)," Watling said.

He highlighted that sector models support that expectation, with both cyclicals and tech currently overbought on a one- to two-month time frame.

"In contrast, defensive sectors are oversold and notably cheap relative to the rest of the market. A rotation into defensives leadership would be consistent with continued consolidation or even some giveback of gains," Watling concluded.