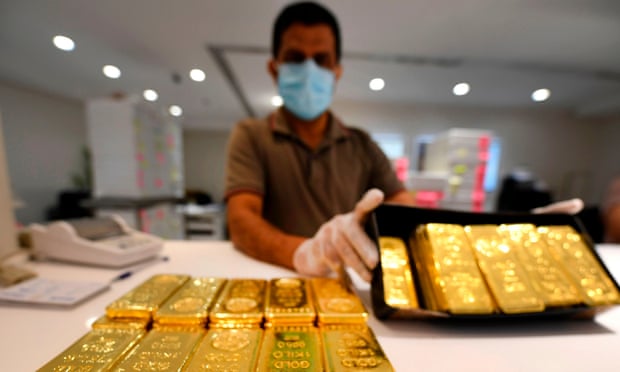 As the coronavirus pandemic causes havoc in economies around the world, interest rates circle around zero and fears continue about economic trade wars, there is one investment that is prospering – gold.

The precious metal has seen record highs this year prompted by a surge in interest from investors – both individuals and institutions – looking for a stable place for their cash as governments grapple to bring in post-pandemic recoveries while exiting lockdowns, and the prospect of a recession looms large.

Long seen as a “safe haven” asset, the value of gold has doubled over the last decade and is currently at just over £1,400 an ounce, just below the all-time high recorded in May at the peak of lockdown.

“Why? Because basically gold does well when other stuff does badly in the historical sweep of things,” says Adrian Ash, director of research at BullionVault, an online trading platform for precious metals.

So should investors, looking at the derisory rates offered by the high street banks, buy gold now as the prospect of a recession comes close? Or has the value already peaked?

Gold tends to thrive when the rest of the world is faltering. It hit a then-record high of £367 an ounce in early 1980 prompted by high inflation due to strong oil prices, the Soviet intervention in Afghanistan and the impact of the Iranian revolution.

During the financial crisis in 2011, inflation, debt, the US dollar and unrest in the Middle East, pushed it towards another high. And now, as the effects of the coronavirus pandemic ripple through all parts of society, the price rise has been spurred by large investors, such as private banks.

Individual investors have also been moving money into gold in large scale during the first six months of this year. The Royal Mint, which operates several ways to buy gold, has seen a threefold increase in sales in the first half of this year compared to last.

BullionVault has reported a record number of new investors signing up during the early stages of lockdown, beating the previous peak during 2011.

“Investors rally to gold to protect their portfolio against any sudden market movements that could incur sharp losses, given the precious metal’s ability to hold its price during turbulent times,” says Giles Coghlan, chief currency analyst at brokers HYCM.

“The current surge in price comes at an interesting time – governments are trying to bring about a post-pandemic recovery, but cases continue to rise and concerns over the long-term economic downturn clearly have investors worried. Private banks have been encouraging their high-net-worth clients to allocate gold into their portfolio, which infers that not everyone is confident we have entered the ‘recovery’ phase.”

The ability to trade online via apps has led to a flood of new types of investors. The fastest growing demographic in the Royal Mint’s products are 25-to-34-year-olds, says its division director of precious metals, Andrew Dickey.

It has not always been the case, of course. After the financial crash, the price of gold fell between 2011 and 2015 before it started to increase again. “It can be volatile and has long periods where it performs badly,” says Darius McDermott, managing director of Chelsea Financial Services. “Between 2011 and 2015 the price went down approximately 40% while stock markets were going up.”

And it doesn’t come with any guarantees. There is no interest payment, unlike a bank account, and you won’t get a dividend. In fact, it is likelyyou will have to pay to store it in one of the vaults operated by brokers. Selling it can result in fees for the broker. And investing in an exchange traded fund (ETF), an investment fund which tracks the price of gold, usually brings with it management fees.

While the individual investor can buy as little as one gram, at £45, Ash says that people should aim for minimum investments of about £1,500 in order to get a reasonable return after covering the costs of storage and fees.

And then there is the question of how long the current highs are going to last.

Recession and the low-interest-rate boost

When interest rates are low, gold tends to prosper, says McDermott. And they look very likely to remain in the doldrums for the immediate future. The possibility of rates going negative would be a further boost.

“‌Gold has proven to be the place for investors to gain during the last three major recessionary periods. In 1990-91, 2001 and the 2007-09 global financial crisis, it has increased in value,” says Coghlan.

“In the short-term, I anticipate demand for gold and other precious metals to rise to hedge against market uncertainty. As such, there is good reason to expect the price to surpass $2,000 USD per ounce by the end of the year.” It is currently at $1,800.

Research by HYCM suggests security is as important for many as getting a return on investment at present.

Says Coghlan: “It is an important tool for investors; however, it needs to be properly managed. It is more suited for short- and medium-term purposes and requires the investor to keep a keen eye on the market to know when it is best to sell.”

McDermott says it should still be part of an investment portfolio. “Our preferred route is to buy a gold equity fund. They tend to outperform nicely when the spot price is doing well. Our preferred fund is Ninety One Global Gold which is up 52% over the last 12 months,” he says. It has a minimum investment of £100.

While other investments, such as cash, return so little, gold is also prospering amongst those not just looking for stability. The key driver, experts say, is what could I own instead that pays better?

“Gold doesn’t pay you anything: in fact it should cost you a little bit to hold it – in insurance, in storage. Normally [the answer is] cash or bonds … but of course, right now, interest rates are below zero and only getting worse. You are losing real value with cash in the bank and that historically tends to make gold an appealing asset,” says BullionVault’s Ash.