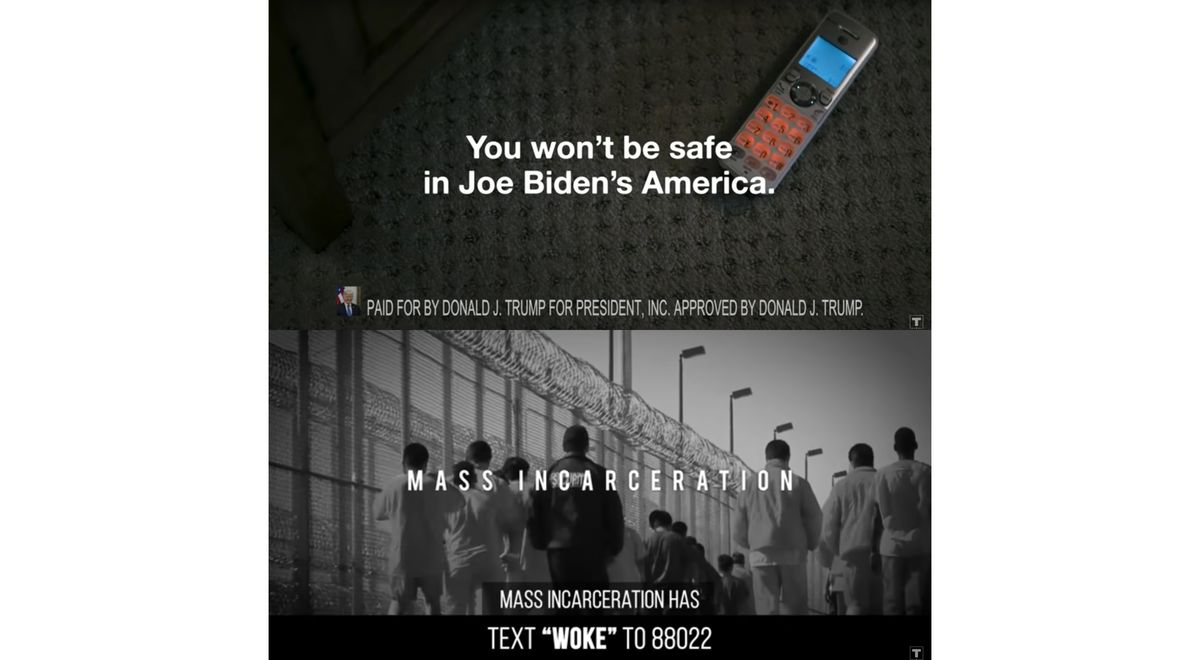 President Donald Trump’s campaign is hitting Joe Biden on crime from two sides, targeting White voters with TV ads calling him part of a “radical left-wing mob” that would defund the police, while telling Black voters Biden’s crime bill put too many African-Americans in prison.

“It’s not uncommon for a campaign to frame an issue a different way for a different audience,” said Travis Ridout, who tracks political ads for the Wesleyan Media Project. “Often times they wouldn’t do that on television though. They’ll do it on digital or Facebook. It’s a lot easier to see your hypocrisy if you do it on broadcast TV.”

“Break In” features an elderly White woman calling 911 but getting no answer as a burglar breaks in to her home. It makes the false claim that Biden is “absolutely onboard” with defunding police departments. The ad is running in swing-state markets like Atlanta, Orlando, Tampa, Pittsburgh and Cincinnati, on shows like “Judge Judy,” “Jeopardy!” and “The Ellen DeGeneres Show.”

Another ad, “We Remember,” begins with images of Black men behind bars, followed by clips of Biden arguing in the Senate for mandatory minimum sentencing, a practice that later lost support for disproportionately affecting people of color.

That ad is also running in Atlanta but also Charlotte, North Carolina, and Philadelphia, other cities with large Black populations. And it’s running on daytime talk shows popular with Black audiences, like those hosted by Maury Povich, Steve Harvey and Wendy Williams.

Trump has made painting Biden as a captive of his party’s progressive wing a key part of his message this summer, saying Biden would “destroy the American way of life” in the suburbs if he allowed liberal policing policies to become law. Trump needs suburban voters badly in key swing states, and he’s taking the most extreme ideas to emerge from the George Floyd protests to falsely suggest Biden supports them.

Biden has said he opposes defunding police departments, instead that saying federal grants to local law enforcement should be tied to agencies’ improving their records on treatment of minorities.

The ad targeting Black voters isn’t trying to persuade African-Americans to vote for Trump but to keep them from voting for Biden, analysts said. Biden has enjoyed overwhelming support of Black voters, a key Democratic constituency, and even shaving a percentage point or two from those numbers by depressing voter turnout could swing key states in a close election.

Audience demographics published by the Hollywood Reporter show that programs like “Maury” and Wendy Williams’s show have historically had audiences more than 50% Black, while Ellen DeGeneres’s show ranks near the bottom with Black audiences.

But Dennard maintained that the messages are entirely consistent.

“Democratic local officials that have allowed Black communities, Black businesses, Black churches to be burned to the ground. That’s not happening in the suburbs and all-White affluent communities,” he said. “When you tie that into into Joe Biden’s support of the crime bill, that had a lasting and hurtful effect not just on Black men, but on Black families and Black children and Black communities.”

The Biden campaign didn’t respond to questions about the ads.

Biden has overwhelming support from Black voters in large measure because of his years as Barack Obama’s vice president, and as Trump defends the right to honor Confederate officers.

But he faces lagging enthusiasm among younger Black voters who need to be inspired to come out and vote for him. A popular Black radio host, Charlamagne Tha God, criticized Biden on Friday for saying that Trump was the “first” racist elected president, and said Biden should name a Black woman as his running mate “so I can be enthused about voting for her, because I will never be enthused about voting for you.”