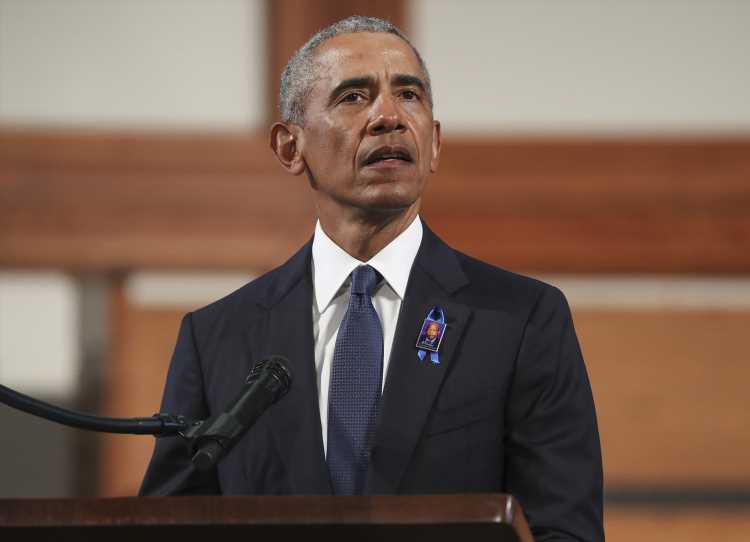 President Jimmy Carter, 95, and former First Lady Rosalynn Carter, 92, were also not in attendance because the two "are not traveling these days," a spokesperson told NBC News. However, the Carters did send along a written statement, which was read during Thursday's services.

President Donald Trump was not in attendance and a White House spokesman would not explain to PEOPLE on the record why the president did not attend the funeral for the veteran congressman and Civil Rights icon.  (Trump, 74, also refused to attend Lewis' memorial services in D.C. earlier this week.)

Throughout Obama's eulogy, the former president made reference to modern racial tensions in the U.S.

“Like John, we’ve got to keep getting into that good trouble,” Obama said. “He knew that nonviolent protest is patriotic — a way to raise public awareness and put a spotlight on injustice and make the powers that be uncomfortable.”

Elsewhere in his eulogy, Obama extolled the value of the voting-access activism of Lewis and others — and of the challenges posed by politicians who would work, systematically, to make it harder for some people to vote.

Referring back to a 2013 Supreme Court decision that had severely weakened the Voting Rights Act which was a crowning achievement of Lewis' life, he said:

"If politicians want to honor John, and I’m so grateful for the legacy and work of all the congressional leaders who are here, but there’s a better way than a statement calling him a hero. You want to honor John? Let’s honor him by revitalizing the law that he was willing to die for."

After Obama finished his speech, the church choir played "We Shall Overcome."

“What a gift John lewis was," Obama said, ending his speech. "We are all so lucky to have him walk with us for a while and show us the way.”