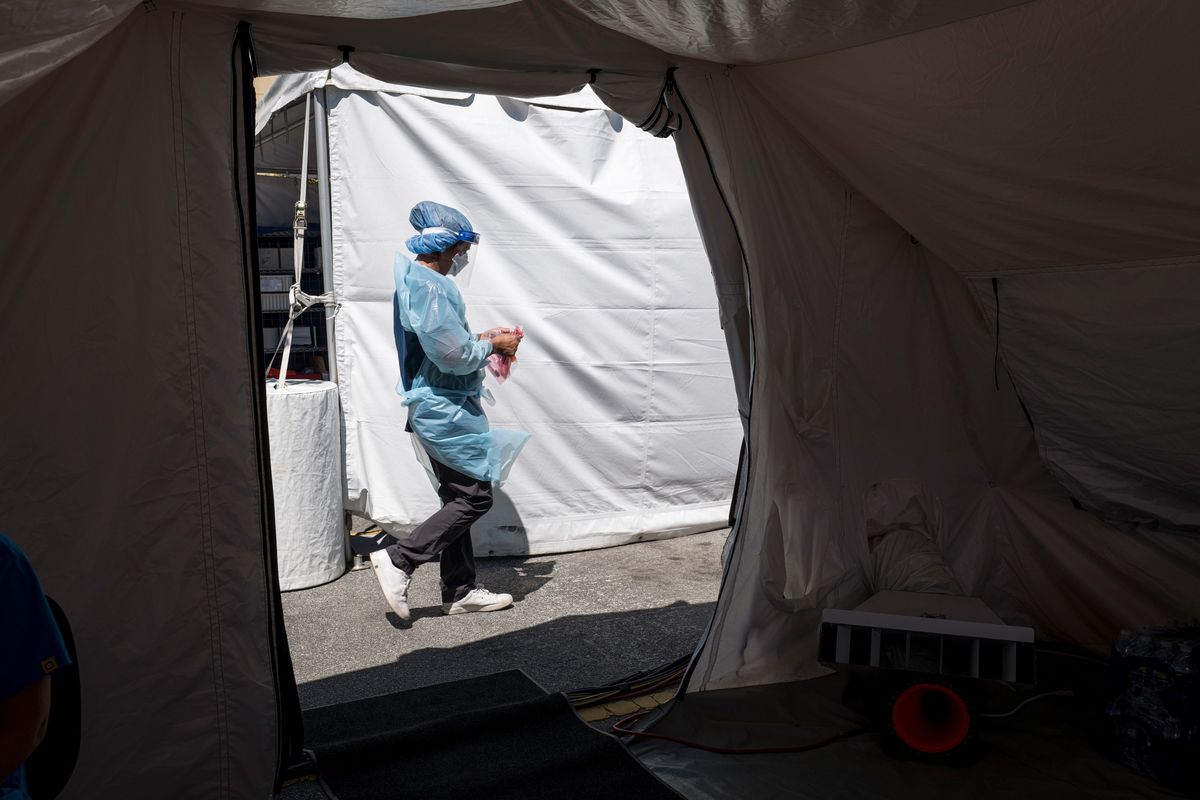 U.S. Health and Human Services Secretary Alex Azar will visit Taiwan to discuss the international response to the Covid-19 pandemic. The trip comes as Bill Gates, whose foundation has pledged more than $250 million toward Covid-19 research, said the U.S. must take a more global approach in making vaccines available.

Japan’s Olympics chief told the Financial Times the 2021 Games will proceed even if there’s no resolution to the pandemic. New Zealand was warned to brace for the inevitable return of Covid-19.

Subscribe to a daily update on the virus from Bloomberg’s Prognosis team here. Click CVID on the terminal for global data on coronavirus cases and deaths.

Azar is scheduled to arrive in Taiwan “in the coming days” to discuss the global response to the Covid-19 pandemic and give supplies of medical equipment and technology, according to a statement on Wednesday from the American Institute in Taiwan, the de facto U.S. embassy in Taipei. It is the first cabinet-level visit to Taiwan in six years.

The visit comes amid steadily escalating tensions between the U.S. and China, which Taiwan officials accuse of taking a more hostile posture toward the island with a sharp increase in military incursions into its air defense identification zone.

The Microsoft Corp. founder and philanthropist said in an interview that while the U.S. leads in research, “we’ve only taken care of ourselves” in producing and procuring a vaccine.

Gates also said he believes a vaccine will likely be approved by the beginning of 2021, though that may be a “stop-gap” primarily available to wealthier nations. More effective vaccines, Gates said, may take longer to develop.

The World Health Organization has urged caution over a coronavirus vaccine that Russia has been developing, the Telegraph reported, citing a document from the organization.

The global health body said that while the vaccine is in clinical trials, no second- or third-phase trials from Russia have been listed to date. The vaccine by the Gamaleya Research Institute in Moscow is still in phase one trials and far behind some of other prospective candidates.

Toshiro Muto, chief executive of Tokyo’s Olympic organizing committee, told the Financial Times that the event will still take place next summer, and that the national government must take a larger role since a comprehensive virus strategy will be crucial.

“I don’t know what the state of coronavirus infections will be next summer, but the chances it is a thing of the past are not high. Rather, the important thing is to deliver an Olympics for people who must live with Covid-19,” the FT cited Muto as saying.

New Zealand must prepare for another local outbreak of the coronavirus, the Director-General of Health warned.

It’s inevitable that there will be a case of community transmission of Covid-19, Ashley Bloomfield told Radio New Zealand on Wednesday.

“It’s a matter of when, not if,” he said. “We are working on the basis it could be any time, of course coupled with doing everything we can to intercept the virus at the border.”

Novavax Inc. shares saw huge swings in extended trading as investors took a critical eye to early data on its experimental vaccine for Covid-19 following a 3,800-percent rally in the stock this year.

The shares briefly fell as much as 34% postmarket on Tuesday, before paring the decline. The two-injection regimen when administered concurrently with Novavax’s immune-boosting technology generated antibody responses that were four times higher than those seen in people who had recovered from the disease.

Confusion over the vaccine’s safety data arose after a media report incorrectly said trial participants were hospitalized with severe reactions. The vaccine appeared safe in the more than 100 patients who received it, according to the company. Reactions to the shots were generally mild, lasting two days or less. One patient getting the vaccine had a mild skin infection that was determined not to be related to the shot.

Texas’s positivity rate climbed for a third straight day, reaching 13.88%, the highest since July 22, according to state health department data. The figure was still down from the July 16 peak of 17.43%.

The Lone Star state also detected 9,167 new cases, bringing the total to date to 451,181. More than 7,000 Texans have succumbed to the virus since the outbreak began, but monitoring fatalities on a daily basis has become difficult because the state changed the way it tracks and discloses deaths last month.

In Houston, the fourth-biggest US city, Covid-19 hospitalizations declined for a 14th consecutive day, according to the Texas Medical Center.

A bipartisan group of governors led by Maryland’s Larry Hogan has formed a pact with the Rockefeller Foundation to buy millions of coronavirus antigen tests, the most significant example so far of states teaming up to fight the pandemic rather than working through the federal government.

The group includes Louisiana, Maryland, Massachusetts, Michigan, Ohio and Virginia, and the states are already in discussions with test manufacturers Becton Dickinson and Quidel. The tests, which search for proteins on the surface of the virus, can deliver results in 15 to 20 minutes.

Coronavirus cases in the U.S. increased 1.1%, as compared with the same time Monday, to 4.74 million, according to data collected by Johns Hopkins University and Bloomberg News. The increase was lower than the average 1.4% daily gain over the past week. Deaths rose 0.7% to 156,133.

California reported 4,526 new cases, its lowest daily tally since June and well below the 14-day average of 8,476 infections, according to state health data. There were 113 added deaths, compared with the two-week daily average of 125. That brings the total to 9,501.

There were other signs of improvement, as hospitalizations fell 1.5% and the 14-day average test positivity rate declined to 6.7% from 7.5% last week.

Still, the picture may not complete. The state posted a disclaimer on its website saying that cases may be underreported due to issues with its laboratory reporting system.

Ireland delayed the latest phase of its reopening. Bars that don’t serve food, which had been due to reopen August 10, must remain closed until at least the end of the month. Indoor gatherings will be limited to 50 people, and outdoor events to 200.

Masks will be made mandatory in stores and malls, while the government removed five countries including Malta and Cyprus from its list of countries safe to travel to.

Arizona reported 1,008 new cases on Tuesday, a drop from the day before and the lowest since late June. Total cases grew by 0.6%, less than the seven-day average of 1.2%. The state Department of Health Services also reported 66 new deaths, for a total of 3,845.

The positivity rate statewide was 14.8%, a slight increase from the 12.9% reported on Monday. In Maricopa County, the state’s most populous, health officials reported 16.3% positive tests, above the 14.3% positivity rate reported the previous day.

Oxiris Barbot, head of the city’s Department of Health and Mental Hygiene, resigned following months of disagreements with Mayor Bill de Blasio over the city’s virus policies. Dave Chokshi will be the new commissioner, the mayor said in a news release.

Barbot and the mayor clashed over the role of the health department in combating the virus, with de Blasio’s decision to put the public hospital system in charge of testing and contract tracing a major flashpoint.

Florida reported 497,330 Covid-19 cases on Tuesday, up 1.1% from a day earlier, compared with an average increase of 1.8% in the previous seven days. Deaths among Florida residents reached 7,402, an increase of 245, or 3.4%, according to the report, which includes data through Monday.

The new rate of people testing positive for the first time, though, rose to 10.9% for Monday, from 9.1% on Sunday.

State-run testing sites were closed for several days in anticipation of Hurricane Isaias.

Cases rose at a faster pace last week in the Netherlands compared with the seven days prior, the RIVM Dutch National Institute for Public Health and the Environment said on Tuesday. In the week ending Aug. 4, 2,588 new cases were confirmed, up almost double from 1,329 the week prior.

Fatalities have risen at a slower pace, rising to 6,169 Tuesday morning from 6,164 a week earlier, according to data collected by Johns Hopkins University and Bloomberg News.

— With assistance by Kara Wetzel