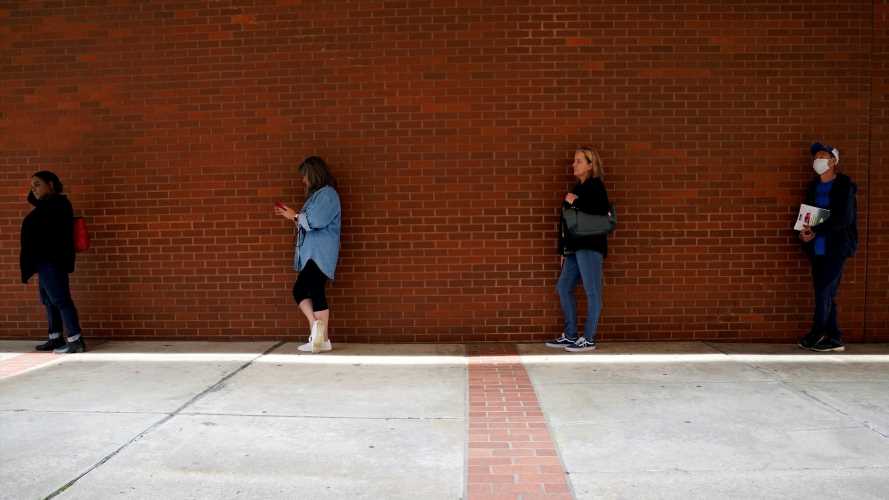 WASHINGTON (AP) — The United States added 1.8 million jobs in July, a pullback from the gains of May and June and evidence that the resurgent coronavirus is stalling hiring and slowing an economic rebound.

With confirmed viral cases still elevated in much of the nation and businesses under continued pressure, many employers appear reluctant or unable to hire. Even counting the hiring of the past three months, the economy has now recovered only about 42% of the 22 million jobs it lost to the pandemic-induced recession, according to the Labor Department’s jobs report released Friday.

The acceleration of the viral outbreak that began in late June more than doubled the daily U.S. confirmed case count by mid-July, though the rate of new reported cases has since declined. The outbreaks have led many states and cities to close bars and other businesses for a second time and have dampened confidence, causing many consumers to continue limiting their shopping, traveling, eating out and gathering in crowds.

July’s job gain was much lower than June’s 4.8 million and May’s 2.7 million jobs, both of which were revised slightly.

The economy is struggling to emerge from the devastating recession that caused the economy to shrink at a nearly 33% annual rate in the April-June quarter, the worst quarterly fall on record. Employers slashed their work forces, consumers cut spending and corporations pulled back on investment and expansion.

The economy has since started to grow again, and many economists have forecast a solid rebound in the July-September quarter, though not nearly enough to offset the second quarter’s dizzying fall.

THIS IS A BREAKING NEWS UPDATE. AP’s earlier story is below:

Just how severely has the resurgence of the coronavirus pummeled the U.S. economy? The jobs report for July being released Friday will provide the clearest answer yet.

Economists have forecast that employers added 1.6 million jobs, according to a survey by data provider FactSet. That would normally be a scintillating gain. Yet it would still fall far short of June’s 4.8 million increase and May’s 2.7 million gain. And it would mean that the economy has regained only about 40% of the jobs that were lost when the pandemic intensified in March and triggered a deep recession and tens of millions of layoffs.

The unemployment rate is expected to have declined from 11.1% to 10.5%, which would still exceed the highest rate during the 2008-2009 Great Recession.

Some economists say Friday’s report could even show that the nation lost jobs in July. Others expect the gain to be much larger. The pandemic has so disrupted the economy that the range of predictions by experts has become much wider — and less accurate — than it typically was before.

The economy cratered in the April-June quarter, shrinking at a nearly 33% annual rate, as the viral outbreak shut down businesses and consumers pulled back sharply on dining out, traveling and shopping.

Growth rebounded in May and June. But the viral outbreak re-intensified in late June, doubling the nation’s daily confirmed case count to more than 60,000. Case counts have declined somewhat in recent weeks. Yet the new outbreaks have forced most states to pause or reverse their re-openings — closing bars, discouraging travel and limiting shopping and indoor dining for a second time, all of which has likely slowed hiring.

Even when the economy does rebound, it’s likely to do so, at least initially, with fewer jobs. Once an economy starts to recover, companies typically try to derive as much production from their existing employees as they can before taking the risk of hiring more people.

The Institute for Supply Management reported in two surveys this week that both manufacturing and service sector companies expanded output and sales faster in July than in June. Even so, companies in both surveys reported that they were still cutting jobs.

Some other recent data points to a weak month for hiring. The Census Bureau has found in weekly experimental surveys that the number of people with jobs fell 6.7 million in July, which points to a huge drop in the official figures. In June, the same set of surveys had shown a gain of 5.5 million, close to the government’s official figure.

The Census report isn’t adjusted for seasonal trends, though, and many schools typically cut jobs in the summer, which has led economists to say that the Census figures might be exaggerating the losses.

Some reports suggest that businesses still added workers in July, albeit at a slower pace. Kronos, a company that makes work management software for small companies, said the number of shifts worked at its clients rose just 1% in July, indicating that some previously laid-off workers are still being recalled. But that’s much smaller than the total gain of 32% in the previous 11 weeks combined.