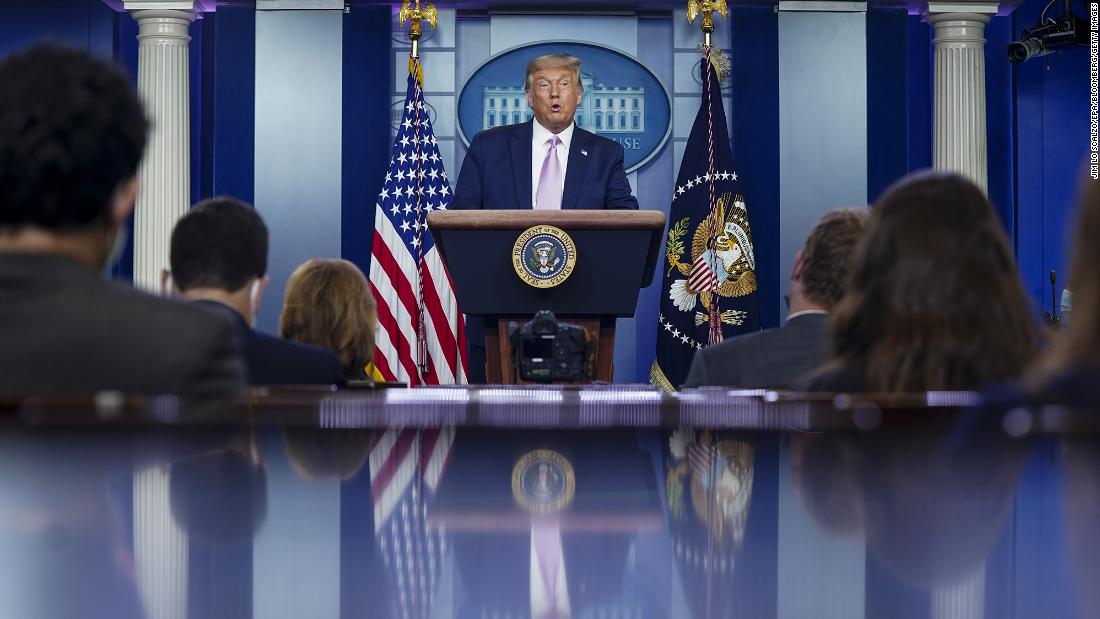 Christine Romans is chief business correspondent for CNN. The opinions expressed in this commentary are her own.

With three months to go until Election Day, the president is sticking to his playbook when it comes to the economy. He’s still taking credit for the positive, ignoring the negative and making stuff up to cater to his base.

The strategy was on full display just this week.

Take China and trade. His upside-down interpretation of who pays for tariffs is a falsehood he repeated again on Monday at his coronavirus press briefing.
“We’ve taken in tens of billions of dollars from China,” he said, pointing to the Treasury secretary. He claimed that before his trade war, the United States only lost money to China. “And $28 billion we gave to our farmers because they were targeted by China.” In his telling, the United States slapped tariffs on Chinese goods, the Chinese government has been paying those tariffs and President Trump has been redirecting the money to American farmers.
But here’s the truth: American companies pay for Trump’s tariffs. And the money to bail out the distressed farm belt came from taxpayers, not from a magic bank account of money sent from China.

Still, this claim gets heavy play in Trump’s greatest hits of economic falsehoods.
“It’s not true and not only do we know it’s not true, we know he has been told it is not true,” says Tony Fratto, former Treasury Department official in the George W. Bush White House, now a managing partner at Hamilton Place Strategies.
“What we don’t know is whether the president believes it (or) whether this is the kind of thing he knows his supporters want to hear.”
Fact-checkers toil away, but the complexities of tariffs just don’t matter to Trump, Fratto says. Trump supporters just want to hear he is “taking it to China.”
The Trump strategy? Project strength, accentuate the positive, and facts don’t matter.
It’s why in Trump’s world, with 5 million coronavirus infections and millions collecting unemployment benefits, the president promotes the stock market’s gains as a real-time poll for how people feel about him.
“401(k)s are doing fantastically,” Trump said in a press event at his Bedminster golf club Saturday afternoon. “I hope you kept your stocks. I hope you didn’t sell. I hope you had confidence in your president and confidence that the president was going to be reelected.”
All presidents focus on the positive, especially to get reelected. But traditional administrations have studiously avoided taking credit for stock market gains for fear of getting blame on the way down or seeming out of touch with the 45% of Americans who don’t own stocks.
Certainly for a president whose biggest argument for re-election before the pandemic was the strong economy, the stock market is a respite from months of terrible economic news. The Nasdaq has hit record highs and the S&P 500 has recovered its coronavirus losses, allowing Trump to cheerlead. And to cherry pick.
At his coronavirus press briefing Monday, he marveled at the “record” rebound in May, June and July of 9.3 million jobs added back. It was a record bounce, but from an also-record crash of nearly 22 million jobs lost in March and April. (That’s still a pandemic jobs deficit of almost 13 million.)
And he is not afraid to say out loud why it matters.
“There is no reason why the economy can’t grow at a 20% pace in the third quarter,” he said. “That would be a record. And, interestingly, it’ll be a number that’s going to be announced before November 3rd.”
That’s right. He said it out loud. This is about his reelection.
Never mind the details. Or the facts. To wit: that executive action show-and-tell at his golf resort Saturday.
On the payroll tax deferral, he said everyone wants it. (They don’t.) And declared he would make the payroll tax cut permanent. (He can’t. Congress has to do that.)
He vowed to cut the capital gains tax and lower middle class tax rates. (That’s Congress, too.)
He promised $400 a week in extra jobless benefits to out-of-work Americans. But he made that promise with money that states say they don’t have. Three days later, that was downgraded to $300 a week.

“It’s in his nature — the salesman nature — to be pumping up the thing that is doing well and ignoring the things that are going poorly,” says Fratto.
And with just a few months left until Election Day, you can bet that there’s little chance this behavior will change.
Source: Read Full Article