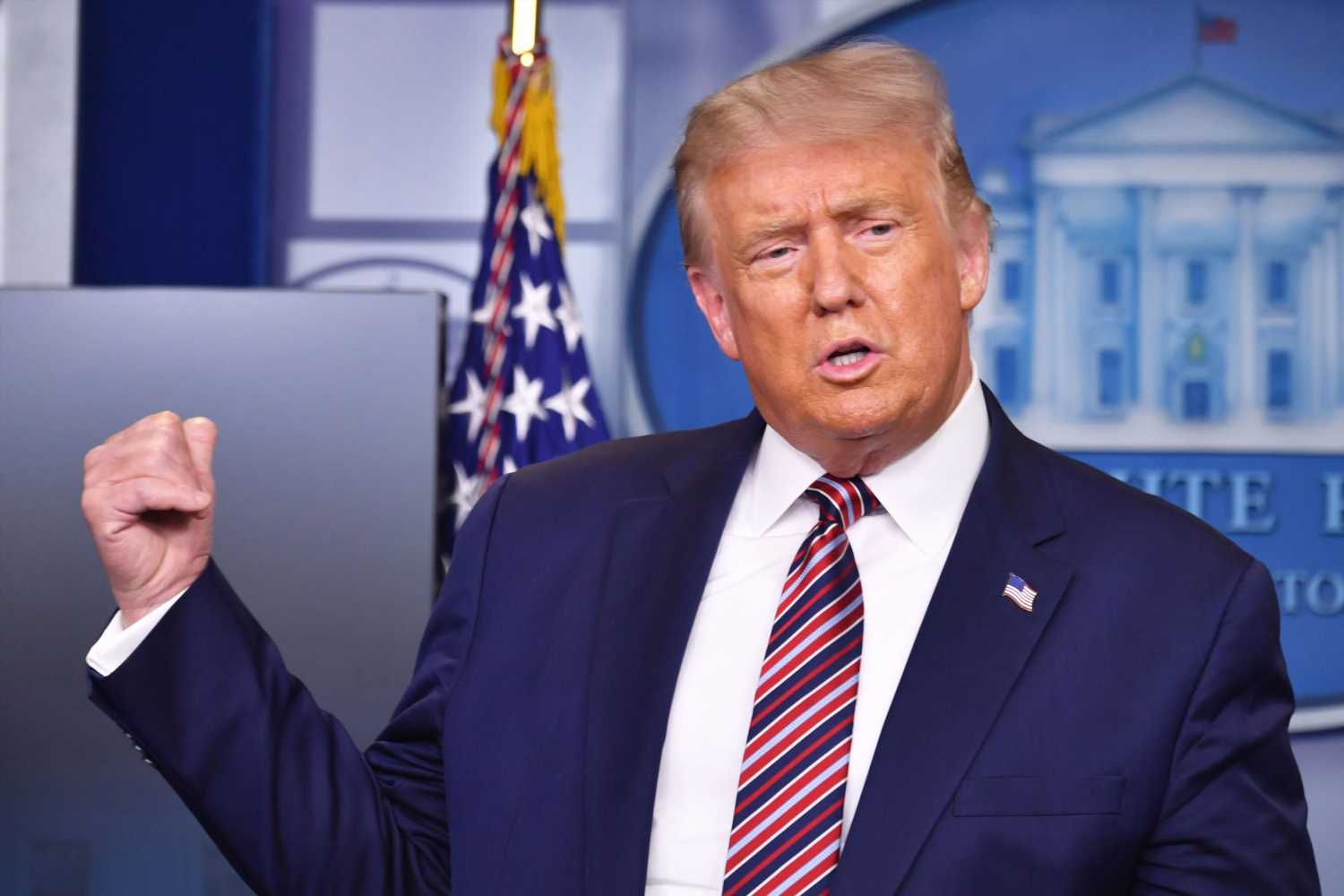 President Donald Trump said that negotiations on additional coronavirus relief funding are at an impasse on Capitol Hill in large part because Democrats want to give billions of dollars to support the U.S. Postal Service and mail-in voting efforts.

"They need that money in order to have the Post Office work so it can take all of these millions and millions of ballots," Trump said in a Fox Business interview Thursday morning. "But if they don't get those two items that means you can't have universal mail-in voting, because they're not equipped to have it."

Trump had been asked what specifically was causing a breakdown in communication between the White House and Democrats on Capitol Hill.

The president has repeatedly claimed that the 2020 election will be "rigged" and rife with fraud if an expected surge of mail-in ballots is allowed to take place. Election experts say those claims are false.

The president's most recent comments suggest he believes he can quash expanded mail-in voting plans, and the Postal Service's ability to accommodate them, if he refuses to agree to fund those efforts.

Democrats, meanwhile, worry that a slew of recent operational changes made by the new postmaster general, a major donor to Republicans and Trump-supporting committees, could harm the integrity of the election.

Members of both parties have called on the postmaster general, Louis DeJoy, to reverse the sweeping changes, which have been blamed by mail workers' advocates for widespread mail delays.

"We're getting complaints across the board" of a slowdown in mail deliveries, said Mark Dimondstein, president of the American Postal Workers Union, in an interview with CNBC.

"Anything that slows down the mail is the opposite of the what the people in this country want and deserve," Dimondstein said.

Democrats, as part of their $3 trillion Covid-19 relief proposal, want to include a $25 billion infusion for the Post Office, which has hemorrhaged billions of dollars during the pandemic. That stimulus package also included $3.6 billion for election funding, which House Speaker Nancy Pelosi said is partly to ensure there are enough polling places and that they are spaced out and open long enough to mitigate the spread of the virus.

"It's a health issue. You shouldn't have to choose between your health and the ability to cast your vote," said Pelosi, who accused Trump of "undermining the health of our democracy" by refusing to put up money for absentee voting or the Postal Service.

Talks between Democratic leaders and the White House have broken off, as the two sides remain "miles apart" on a deal for more relief funding, according to Pelosi.

Trump's remarks to Fox Business expanded on his prior claims that mail-in voting is impossible if he doesn't approve the funding.

"It's very simple. How are they going to do it if they don't have the money to do it?" he said.

A split over mail-in voting

With the coronavirus crisis still raging, many voters who would otherwise vote in person are expected to steer clear of polling stations for fear of contracting or spreading the disease, which has infected more than 5 million and killed at least 164,000 people in the U.S.

State leaders, in turn, have made moves to increase access to mail-in voting. More than three quarters of all voters in the U.S. will be eligible to vote by mail in the November election without providing an excuse for doing so, and a handful of states are mailing ballots directly to households, a New York Times analysis shows.

Among them is Nevada, which was sued by the Trump campaign and the GOP after its Democratic governor signed into law a bill to automatically send out ballots.

Democrats say they are far more likely than Republicans to vote for president by mail, according to a new Change Research/CNBC poll of likely voters in battleground states.

The poll, which was conducted between Friday and Sunday and surveyed 2,701 likely battleground voters, found 64% of Democrats saying they expected to vote by mail, compared with just 14% of Republican respondents and 36% of Independents. The poll has a margin of error of plus or minus 1.9 percentage points.

On Thursday, Trump encouraged Americans to vote in person without acknowledging public-health concerns.

"You know, there's nothing wrong with getting out and voting," Trump told Fox Business.

Trump has previously downplayed the impact of the coronavirus pandemic and has pressured states to quickly lift their strict lockdown measures that contributed to an economic plunge earlier in the year. More recently, he has pushed governors to reopen schools for in-person learning, arguing that children face a low risk of harm from Covid-19 and that virtual schooling is a poor alternative.

While some experts say that mail ballots can be more susceptible to fraud than traditional voting in a booth, instances of voter fraud are exceedingly rare.

But Trump, without evidence, has asserted that mail-in voting is highly vulnerable to foreign meddling – even tweeting in June that other nations will print "millions" of ballots that will be used in the 2020 election.

As Trump rails against mail-in voting, the Postal Service and DeJoy in particular have come under fire from lawmakers in Congress.

DeJoy, 63, was selected in May by the USPS board of governors – each an appointee of Trump. A former supply-chain logistics CEO, he is the first postmaster general in nearly two decades who has not been a career employee of the agency, according to the Associated Press.

Since his tenure at USPS began in mid-June, DeJoy has set about implementing cost-cutting measures intended to revive the ailing government agency.

In remarks at the Postal Service Board of Governors open session meeting last week, DeJoy said he is "vigorously focusing on the ingrained inefficiencies in our operations." He stressed that the Postal Service faces financial oblivion unless "dramatic" changes are made to its structure.

Those changes reportedly include a crackdown on overtime and late trips for mail carriers, meaning that mail would be left behind in distribution centers until the next day if carriers cannot deliver it as part of their normal routes.

Pelosi and Sen. Chuck Schumer, D-N.Y., said DeJoy confirmed those and other changes after they met with him last week.

The result, APWU's Dimondstein told CNBC, is that mail is being delayed.

"Millions of Americans rely heavily on the Postal Service for the delivery of essential items — including medications — particularly during the coronavirus pandemic," the letter said. "The operational changes reportedly taking place around the country put in doubt the ability of ill or at-risk populations to receive their medications on time, which could have dire results."

A day later, Maloney, along with Massachusetts Sen. Elizabeth Warren and seven other congressional Democrats, asked USPS Inspector General Tammy Whitcomb to conduct an audit into the changes taking place under DeJoy.

"After initially denying these changes were happening, the Postal Service recently confirmed to staff that they were in fact occurring," that letter said.

"These changes threaten the well-being of millions of Americans that rely on the Postal Service for delivery of Social Security checks, prescriptions, and everyday mail of all kinds – and they appear to pose a potential threat to mail-in ballots and the 2020 general election."

Maloney has called for DeJoy to testify before her committee on Sept. 17. On Tuesday, she introduced a bill to prohibit the Postal Service from implementing any of the reported operational changes "until the COVID-19 pandemic has ended."

In another letter sent Wednesday, she and Pelosi, along with 173 other House Democrats, again called for DeJoy to reverse his new policies.

DeJoy last week insisted that, "Although there will likely be an unprecedented increase in election mail volume due to the pandemic, the Postal Service has ample capacity to deliver all election mail securely and on-time in accordance with our delivery standards, and we will do so."

He also denied that his "good relationship" with Trump was influencing his decisions.

"The notion that I would ever make decisions concerning the Postal Service at the direction of the President, or anyone else in the administration, is wholly off-base," he said.

Trump praised DeJoy on Wednesday, while attacking the USPS for past mismanagement.

"The new man — who is a great person, a great businessman — he just got there a little while ago. The Post Office has been run poorly for many, many decades," Trump said.