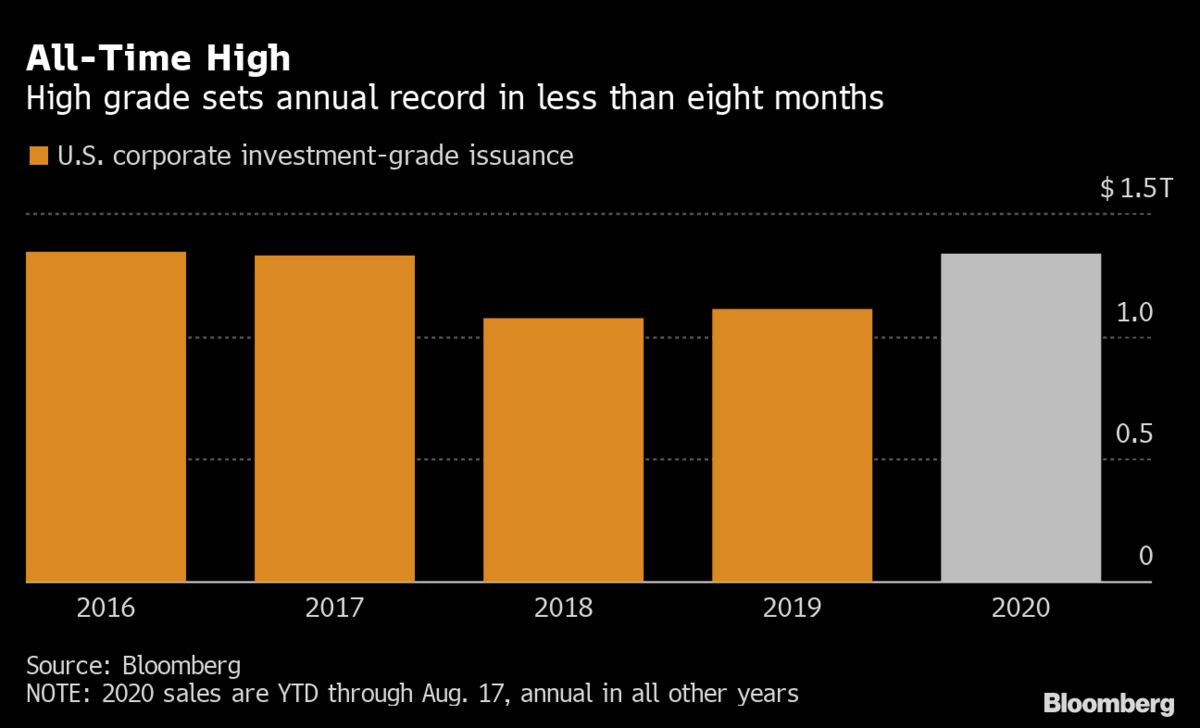 The Fed’s March pledge to use its near limitless balance sheet to buy corporate bonds has lifted nearly every corner of the market, allowing struggling cruise lines, plane makers and hotels to tap much needed financing while providing top-rated companies from Alphabet Inc. to Visa Inc. and Chevron Corp. access to some of the cheapest funding ever seen.

Just five months ago, this kind of issuance was virtually unimaginable. The market was frozen as the coronavirus ravaged the U.S. and brought the economy to a standstill. But following the central bank’s intervention, demand quickly returned, and hasn’t waned since. The Bloomberg Barclays U.S. Aggregate Corporate index reached a record low 1.82% in early August, down from more than 4.5% in March.

“Corporate treasurers got the bejesus scared out of them when the funding markets completely shut down in the third and fourth weeks of March,” Gregory Staples, head of fixed income at DWS Investment Management, said earlier Monday. “So there was the recognition that liquidity is very important and the markets may not be open forever.”

As 2020 enters the home stretch, there’s little sign the borrowing binge is slowing. Investors have poured over $100 billion into funds that buy high-grade bonds over the last 17 weeks, according to data from Refinitiv Lipper.

And the cheaper borrowing costs are enticing American companies to return to credit markets two, three, even four times. Many are refinancing debt due in the coming months and years, taking advantage of the opportunity to extend their maturities.

Still, the barrage of issuance is starting to take its toll on returns, with high-grade bonds in the midst of their worst month since March. They lost 1.58% last week and are down 1.2% so far this month, on track for the first decline since the pandemic took hold and upended markets earlier this year.