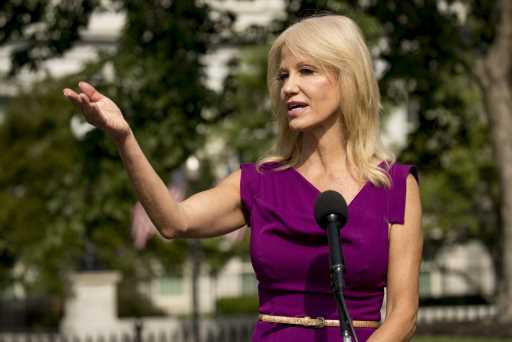 Kellyanne Conway, a high profile senior adviser to President Donald Trump, will leave the White House at the end of the month.

In a statement, Conway said that she and her husband made the decision in the interest of their children.

“This is completely my choice and my voice,” she said. “In time, I will announce future plans. For now, and for my beloved children, it will be less drama and more mama.”

The news comes as her husband, George Conway, announced on Twitter that he was stepping away from the Lincoln Project, the conservative group devoted to defeating Trump in the fall.

“So I’m withdrawing from @ProjectLincoln to devote more time to family matters. And I’ll be taking a Twitter hiatus. Needless to say, I continue to support the Lincoln Project and its mission. Passionately,” he wrote on Twitter on Sunday.

When it comes to Trump, the Conways have been a study in contrasts. As counselor to the president, she is one of Trump’s staunchest defenders, appearing on TV and to the White House press corps on a regular basis.

A lawyer, he has been one of his most strident critics, not only backing Trump’s impeachment but questioning the president’s mental state. He joined the Lincoln Project when it was formed this year to work for Trump’s ouster, producing some of the most memorable ads of the cycle.

George Conway also was known for his frequent posts on Twitter, countering Trump’s own tweet storms with quick retorts.

One of the Conways’ daughters also have been especially vocal on Twitter, with posts about her parents and politics, but she wrote that she, too, was signing off the social media platform.

Kellyanne Conway said in the statement, “We disagree about plenty but we are united on what matters most: the kids. Our four children are teens and ’tweens starting a new academic year, in middle school and high school, remotely from home for at least a few months. As millions of parents nationwide know, kids ‘doing school from home’ requires a level of attention and vigilance that is as unusual as these times.”

She is scheduled to speak at the Republican convention this week.

Conway was named as Trump’s campaign manager in August, 2016, after a shakeup, and she helped orchestrate his unexpected victory. She joined the White House at the start of his term.