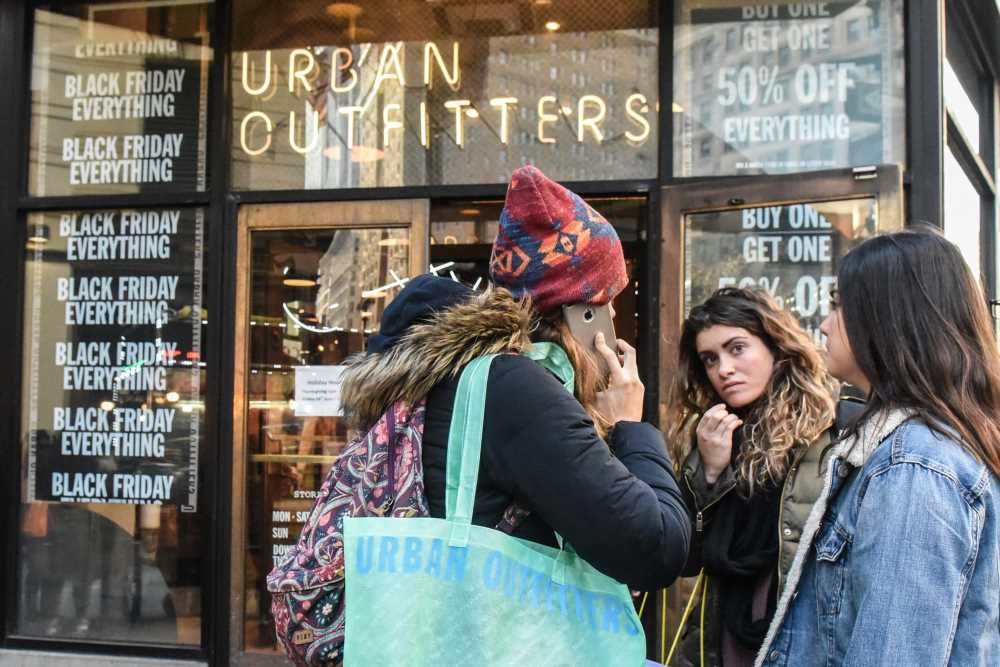 Check out the companies making headlines in midday trading.

Salesforce —Shares of the software company surged 27% following its blowout earnings. The soon-to-be Dow member reported earnings per share of $1.44, topping estimates by 77 cents, according to Refinitiv. Revenue came in at $5.15 billion, higher than the $4.9 billion forecast on the Street. Revenue from the core Sales Cloud, which enables salespeople and managers to keep track of business, totaled $1.28 billion, growing 13% on an annualized basis.

Urban Outfitters – Shares of Urban Outfitters soared nearly 22% after the apparel retailer posted a big earnings surprise. The company reported a profit of 35 cents per share for its latest quarter, compared with expectations of a 40 cents per share loss from Refinitiv. Its revenue also topped estimates on the back of an increase in digital sales.

Nordstrom — The department store company's stocks fell more than 6% after reporting a sales decline of 53% due to the coronavirus pandemic and store closures. Nordstrom reported a loss of $1.62 per share, compared to the loss of $1.48 expectation from Refinitiv. Revenue also missed estimates, coming in at $1.86 billion, compared to the $2.38 billion estimated.

Moderna — The stock popped 6% after the biotech firm said its potential coronavirus vaccine generated a promising immune response in elderly patients in an early-stage clinical trial. The company tested its vaccine on 10 adults between ages 56 and 70 and 10 elderly adults aged 71 and older, Moderna said.

Dick's Sporting Goods — Shares of the sporting goods retailer jumped nearly 15% on the back of strong online sales from the previous quarter. Dick's said e-commerce sales were up by 194% in the previous quarter when compared to the year-earlier period. They also made up 30% of overall sales for the quarter.

Roku — Roku shares jumped nearly 10% after an analyst at Citi initiated coverage of the streaming media company with a buy rating and a price target of $180 per share. That price target implies a 12-month upside of 21.8% from Tuesday's close of $147.77 per share. "We believe Roku will continue to benefit from active account growth and from growing value per active account," the analyst said.

Hewlett Packard Enterprise – Shares of HPE jumped 5% after the enterprise computing company posted a better-than-expected quarter. HPE said it earned 32 cents per share in the previous quarter, 9 cents above Refinitic estimates. The company also issued an upbeat forecast for the current quarter and the full year.

Tesla – Shares of the electric vehicle company jumped more than 4% after Jefferies raised its target on the stock to a Street high of $2,500. In a note titled "The Permanent Revolution Continues," the firm said that we're "still early in the transformation of the auto industry." Jefferies has a buy rating on Tesla.