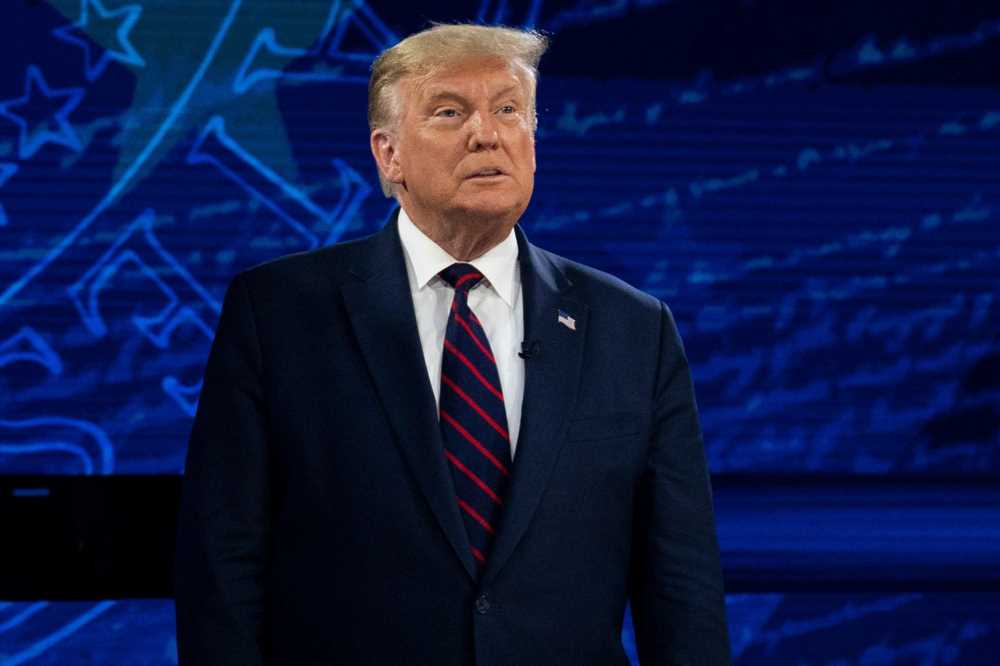 In an ABC News town hall on Tuesday, President Donald Trump was confronted by tough questions from undecided voters — about his handling of the novel coronavirus pandemic, healthcare and other issues.

The response, Trump questioned why his opponent, former Vice President Joe Biden, hadn't issued a nationwide mask mandate (though that authority actually is with those currently in office); and he interrupted a voter while she was asking a question and he dismissed the accounts of his "disgruntled employees."

One of the most noteworthy exchanges of the evening came when Trump, 74, was asked by undecided voter Julie Bart, a retired chemical engineer, why the president doesn't support a national mask mandate and why he himself doesn't wear one more often.

The president has given conflicting messages about the importance of face coverings dating back to the spring, when he said he would not be wearing one even though the Centers for Disease Control and Prevention was recommending it.

When host George Stephanopoulos interjected to say that Biden has actually called on governors to issue mask mandates, Trump replied, "But no, he didn't do it. He never did it."

Biden himself shared the moment on Twitter, writing, "To be clear: I am not currently president. But if you chip in now, we can change that in November," along with a link to donate to his campaign.

While Trump did note that the pandemic has been the most challenging moment of his presidency, he also said he doesn't feel he could have done anything to stop it.

(Journalist Bob Woodward recently released audio of an interview earlier this year in which the president said he knowingly downplayed the threat of the virus.)

"I've learned that life is very fragile," Trump said Tuesday when asked what he's taken from the experience. " … I think what I did, by closing up the country, I think I saved two, maybe two-and-a-half, maybe more than that, million lives. I think we did a very good job. I don't know that that's been recognized."

In a separate exchange, Trump interjected while an audience member was asking a question about healthcare, leading her to chide him.

Ellesia Blaque, an assistant professor in Philadelphia, asked Trump whether a provision protecting those with preexisting conditions should be stripped from law, in light of his opposition to the Affordable Care Act, which included such protections.

Before finishing her question, Trump responded, "No."

“Please stop and let me finish my question, sir,” Blaque said, adding that, were she to go 36 to 72 hours without her medication, she would be dead, due to an inflammatory disease she suffers from called sarcoidosis.

"I want to know what it is you're going to do to ensure that people like me … can stay insured," she added.

Trump, who claimed in the town hall that he was "not going to hurt preexisting conditions," is currently trying to dismantle the ACA, popularly known as Obamacare.

While the president has repeatedly said he will issue a new plan that will take the ACA's place, he has yet to do so.

Also clearly top-of-mind during the Tuesday town hall were alleged comments the president has made regarding service members.

When questioned, Trump said the remarks as reported — and other criticism from his former aides — were "fake" and simply the result of "disgruntled employees."

"How do you expect to win back the support of our military — their family, their friends, and military reporters?" asked Alexandra Stehman, a principal systems architect from Pittsburgh, referencing a recent Atlantic report claiming that Trump has called American service members, including former Sen. John McCain, "losers" and "suckers."

"It's easy, because I never made those statements. They were never made by me," Trump responded, adding that he was "never a fan of John McCain … and I said it to his face" and that The Atlantic "made up" the quotes.

When Stephanopoulos mentioned that many of Trump's former highest-ranking officials have said he is unfit for office, the president shot back that that they were simply angered over being fired, adding that former Defense Secretary James Mattis is "a highly overrated general" and former National Security Advisor John Bolton is someone who "only wanted to blow people up."