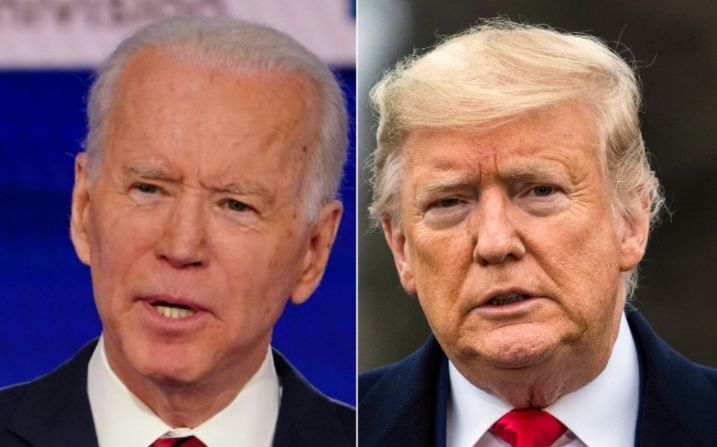 President Donald Trump was once again caught sharing a manipulated video of his election rival, former Vice President Joe Biden. This time, the clip made it seem as if Biden were listening to an anti-police song.

The original video was from a Hispanic Heritage Month event in Florida on Tuesday. After being introduced by Luis Fonsi, Biden played a little audio from the musician’s 2017 mega-hit, “Despacito”:

“If I had the talent of any one of these people I’d be elected president by acclamation,” Biden cracked at the event, which also featured actor Eva Longoria and singer Ricky Martin.

But Trump shared a doctored version of the video in which Biden’s phone appeared to play the N.W.A. song “Fuck Tha Police.”

“What is this all about?” Trump wrote as he shared the clip.

Trump has falsely claimed Biden is anti-police and wants to defund the police. Biden has denied that and his criminal justice reform plan does not mention cutting any funds to law enforcement. Biden has also pointed out that Trump’s budget proposal includes cutting about $500 million from programs that benefit state and local police.

Trump and his campaign have repeatedly utilized doctored photos and videos of Biden, in one case using manipulated images to make it appear as if the former vice president were “diminished” and “hiding.” In another, the Trump campaign altered photos to make Biden appear older.

The campaign was also hit with a “manipulated media” tag on Twitter over another doctored Biden video. And last month, White House deputy chief of staff Dan Scavino tweeted a doctored video that made it appear as if Biden was sleeping through a TV interview. It was actually a clip of screen icon Harry Belafonte.

We want to know what you’re hearing on the ground from the candidates. If you get any interesting ― or suspicious! ― campaign mailers, robocalls or hear anything else you think we should know about, email us at scoops@huffpost.com