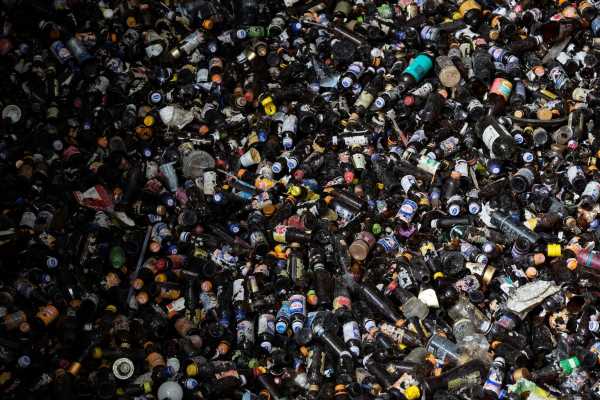 The companies who create much of the 23 million metric tons of plastic garbage that reach oceans and rivers each year are failing to staunch the flow of waste and, in some cases, are being misleading about their efforts, according to two new reports.

A group of scientists led by Stephanie B. Borrelle of the University of Toronto developed a model to evaluate the ambitious commitments to curb plastic trash made by countries, international bodies such as the United Nations, and independent groups. The researchers found that even if all these combined pledges are carried out to the letter, plastic pollution will continue to get worse—on an accelerating basis.

Big U.S. Storm Landfalls This Year Are One Shy of 1916 Record

The amount of plastic waste entering the global water supply each year is expected to double to 53 million metric tons by 2030. Pictures of plastic-choked marine life and beaches littered with discarded cola bottles have led to public outcry, and in turn to corporations and governments proposing a slew of pledges to increase recycling. “Without major technological innovation, it is inconceivable that efforts to recover plastic waste from the environment could reach even 10% of annual emissions,” the researchers said in their report, published on Thursday in the journal Science.

Those findings were reinforced by a separate investigation from a London-based environmental advocacy group called the Changing Markets Foundation. Through its research, the group found that the top 10 corporate producers of plastic were failing to reach even their own targets for reducing virgin plastic use.

The foundation used the two most recent brand audits from the advocacy group Break Free From Plastic as a basis for its research, examining the stated recycling commitments outlined in the reports and checking the companies’ follow-through. The work, the foundation said in a release accompanying the published results, included research reviews, interviews with experts and non-governmental groups, industry sources, policymakers and government document requests.

One case study involved Coca-Cola Co., which Break Free From Plastic has repeatedly named the world’s biggest plastic polluter. The foundation found that the company’s 2009 sustainability report included a commitment to use 25% recycled plastic in its bottles by 2015, while its report for 2015 cited 12.5% recycled or renewable content in its bottles. (Coke didn’t respond to a request for comment.)

Other beverage giants who come under fire in the Changing Markets Foundation’s report for making splashy pledges on plastic recycling that they seem unlikely to achieve include Nestle SA’s North American water division and PepsiCo Inc. “Nestle Waters NA committed to doubling recycling targets for PET bottles to 60% by 2018,” the group said in materials accompanying the investigation, “yet in 2018 this rate was at 28.9%.”

The report also said that despite rhetoric to the contrary, beverage companies were actively undermining government efforts to curb plastic production by law. Coke belongs to seven industry associations that have lobbied to block legislation mandating reductions in virgin plastic use or affect its disposal.

“The voluntary initiatives and commitments by the industry have failed,” said Nusa Urbancic, campaigns director at the Changing Markets Foundation. “Policymakers should look past the industry smokescreen.”