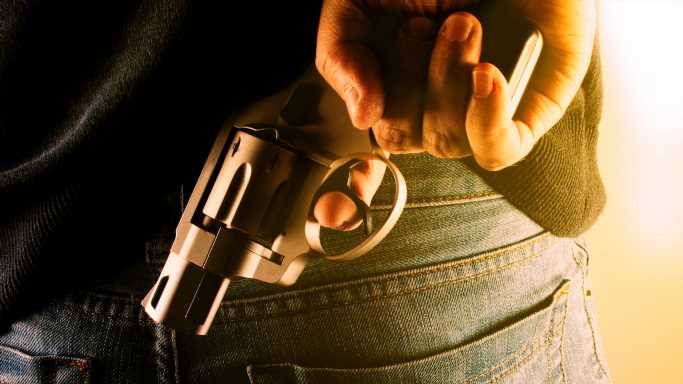 The United States appears to be getting safer overall, according to the FBI’s latest violent crime data. The rate of violent crime (homicide, rape, aggravated assault and robbery) fell by 3.6% in 2018, compared to the prior year. Yet the improvement was not uniform across all states. Some even reported more violent crimes per capita than they did the year before.

To identify the most and least violent states, 24/7 Wall St. created an index based on four measures: the murder rate, the violent crime rate excluding murder, firearm deaths and the incarceration rate. Data came from the FBI and the Bureau of Justice Statistics.

There is a strong, if complicated, relationship between crime and poverty. People from low-income areas are much more likely to be incarcerated than those from more affluent areas, in part because previously incarcerated people may struggle to find legitimate work after leaving prison and are often convicted of another offense. Many states with the lowest median incomes have relatively high rates of violent crime and incarceration. These issues are often concentrated in larger cities with densely packed areas that have long struggled with systemic poverty. These are the cities hit hardest by extreme poverty in every state.

Violent crimes make up a relatively small percentage of all reported crimes in America, with property crimes making up the majority. There were 381 violent crimes for every 100,000 Americans in 2018, but 2,200 property crimes per 100,000. While property crimes are not fatal or physically harmful, they can nevertheless take an emotional and psychological toll on the victims. One such crime is motor vehicle theft, a crime that is much more likely to occur in larger cities.

One state stands out in particular, based on these measurements of violence. Though its violent crime rate is only the sixth highest in the nation, it has by far the highest murder rate in the nation, at 11.4 incidents per 100,000 residents. Louisiana is the only state with more than twice as many murders per capita as the United States overall, at 5.0 murders per 100,000. The state also ranks ninth in robberies per capita and fifth in aggravated assault per capita.

This is how it stands across the primary measures of state violence and contributing factors:

Here’s how all the country’s states rank by violence and peacefulness.