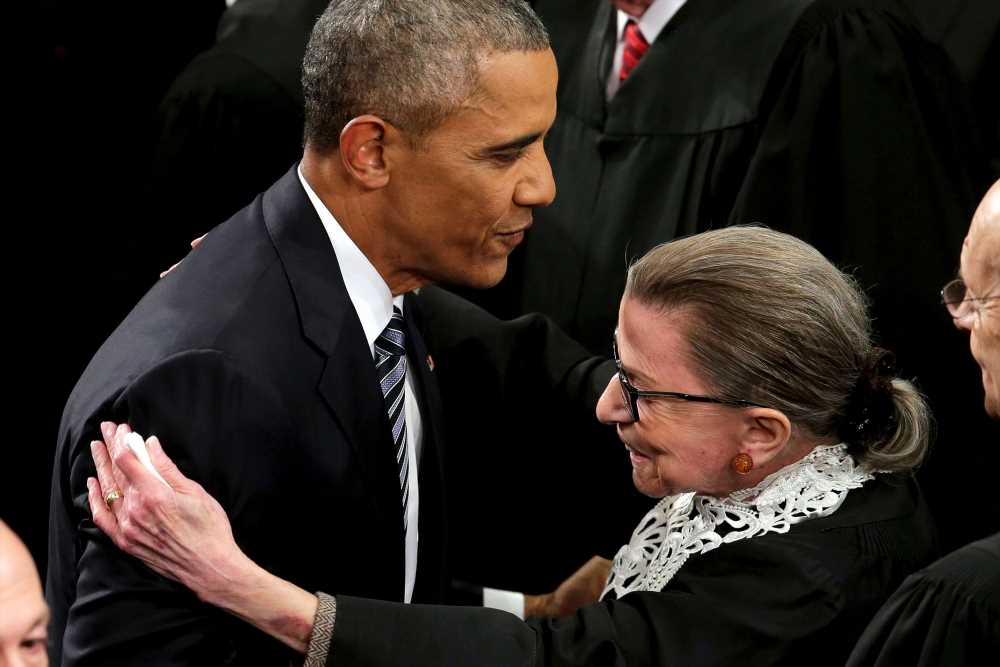 Former President Barack Obama is paying tribute to late Supreme Court Justice Ruth Bader Ginsburg, who died Friday at the age of 87 due to complications of metastatic cancer.

In a statement released shortly after news of her death, Obama praised Ginsburg for being “a warrior for gender equality,” adding that she “believed that equal justice under law only had meaning if it applied to every single American.”

“Over a long career on both sides of the bench — as a relentless litigator and an incisive jurist — Justice Ginsburg helped us see that discrimination on the basis of sex isn’t about an abstract ideal of equality; that it doesn’t only harm women; that it has real consequences for all of us,” Obama, 59, added. “It’s about who we are — and who we can be.” Former President Bill Clinton, who appointed Ginsburg to the Supreme Court in 1993, also expressed a similar sentiment in his own tribute.

“We have lost one of the most extraordinary Justices ever to serve on the Supreme Court. Ruth Bader Ginsburg’s life and landmark opinions moved us closer to a more perfect union,” Clinton wrote in a statement, which he shared alongside a photo of the pair. “And her powerful dissents reminded us that we walk away from our Constitution’s promise at our peril.”

Obama also urged the Senate to honor the late justice by respecting her "fervent wish" to not be replaced "until a new president is installed."

“Ruth Bader Ginsburg fought to the end, through her cancer, with unwavering faith in our democracy and its ideals,” Obama continued in his statement. “That’s how we remember her. But she also left instructions for how she wanted her legacy to be honored.”

He went on to that when conservative Justice Antonin Scalia died in 2016, Senate Majority Leader Mitch McConnell declared it too close to Election Day to consider a replacement. The move ultimately blocked the nomination of Obama's choice for the high court, Merrick Garland. At the time, McConnell, a Republican, said elected officials should "give the people a voice in the filling of this vacancy" by waiting until the next president took office. “Four and a half years ago, when Republicans refused to hold a hearing or an up-or-down vote on Merrick Garland, they invented the principle that the Senate shouldn’t fill an open seat on the Supreme Court before a new president was sworn in,” Obama said. “A basic principle of the law — and of everyday fairness — is that we apply rules with consistency, and not based on what’s convenient or advantageous in the moment.”

On Friday, however, McConnell vowed that the Senate will vote on a replacement for Ginsburg, sharing in a statement that “President Trump’s nominee will receive a vote on the floor of the United States Senate."

President Donald Trump was speaking at a campaign rally in Bemidji, Minnesota when news of Ginsburg's death broke. He told reporters she was "an amazing woman" who lived "an amazing life.” Trump did not discuss Ginsburg during his speech at the rally but briefly mentioned the makeup of the Supreme Court.

“We will nominate judges and justices who interpret the Constitution as written,” he said, according to The Washington Post.