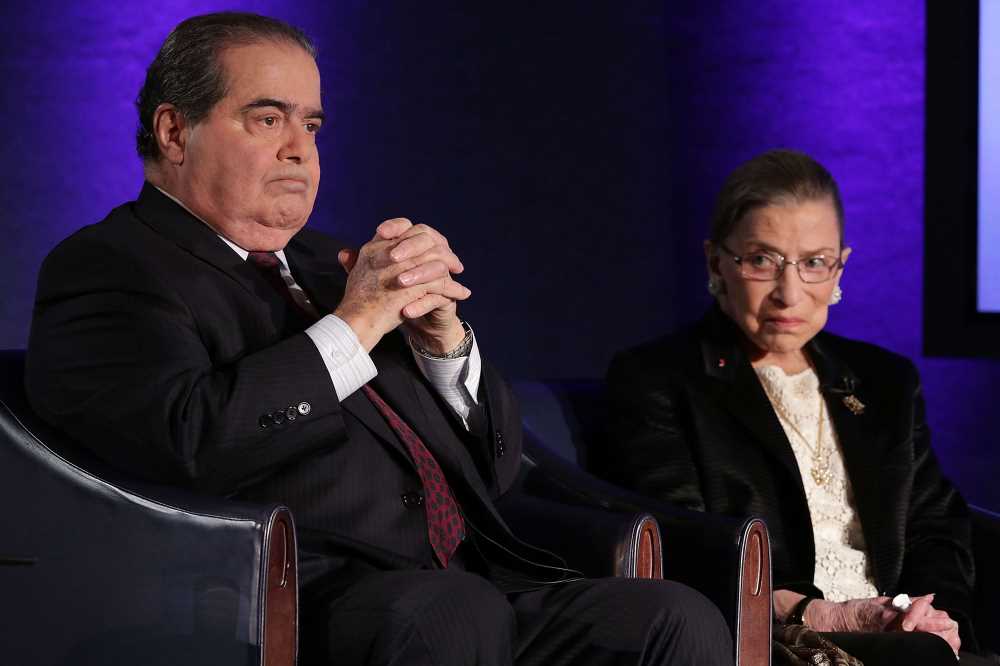 Although Ruth Bader Ginsburg and Antonin Scalia may have had opposing political views, the two Supreme Court justices enjoyed a close friendship.

After learning that Ginsburg died due to complications of metastatic cancer on Friday, Scalia’s son Christopher reflected on how much the liberal icon meant to his conservative father, who died in 2016.

“I'm very sad to hear about the passing of my parents' good friend, and my father's wonderful colleague, Justice Ginsburg. May her memory be a blessing,” Christopher wrote on Twitter. “I'd like to share a couple of passages that convey what she meant to my dad.”

“This is from a roast he delivered for her 10th anniversary on the DC Circuit Court of Appeals. They'd been colleagues on that court until he went to the Supreme Court; she hadn't joined him there yet—and he missed her,” he continued.

In the passage from the roast, after taking a few jabs at his colleague, Scalia went on to share a “few earnest comments.”

“I have missed Ruth very much since leaving the court of appeals. She was the best of colleagues, as she is the best of friends. I wish her a hundred years,” he wrote at the time.

Scalia’s son also shared a story about how his father sent Ginsburg two dozen roses for her birthday close to the end of his life.

During one of his final visits with Scalia, Judge Jeffrey Sutton, a federal appeals court judge and former law clerk to Scalia, recounted seeing the flowers in Scalia’s chambers. Commenting on their opposing political views, Sutton recalled that he remarked, “So what good have all these roses done for you? Name one five-four case of any significance where you got Justice Ginsburg’s vote.”

In his response, Scalia countered that some things “are more important than votes.”

Throughout the course of her life, Ginsburg reflected on the pair’s enduring bond numerous times, including in a moving tribute written in the wake of Scalia's death.

“From our years together at the D.C. Circuit, we were best buddies,” she wrote of their famous friendship, which included shared vacations and New Year celebrations with their families.

“We disagreed now and then,” Ginsburg continued, “but when I wrote for the Court and received a Scalia dissent, the opinion ultimately released was notably better than my initial circulation. Justice Scalia nailed all the weak spots – the ‘applesauce’ and ‘argle bargle’ – and gave me just what I needed to strengthen the majority opinion.”

Ginsburg added, "It was my great good fortune to have known him as working colleague and treasured friend." Shortly before his death, Scalia also reflected on their close bond.

“Call us the odd couple,” he said at a 2015 event at George Washington University. “She likes opera, and she’s a very nice person. What’s not to like? Except her views on the law.”

In one of her final interviews, Ginsburg laughed after being reminded of the praises Scalia heaped upon her, despite their opposing views.

"She has done more to shape the law in this field than any other justice on this court," he said in a 2013 interview, according to CNN. "She will take a lawyer who is making a ridiculous argument and just shake him like a dog with a bone."

Speaking with the outlet in January, Ginsburg replied, "I wish he had listened to me more often."