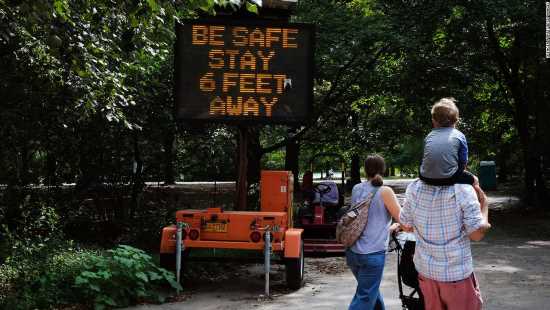 (CNN Business)A version of this article first appeared in the “Reliable Sources” newsletter. You can sign up for free right here.

Some of Trump’s words were mangled, but the implication was that if the USA kept the death toll under 200,000, the country will have “done a very good job.”
It seems unfathomable, 200,000 deaths later, that anyone still thinks “we all, together, have done a very good job.” Yet the belief persists. So does Covid-19 denialism. More on that in a moment…

Different news outlets track Covid deaths slightly differently. The Washington Post and NBC News, for example, have already reported that the 200,000 milestone has been reached. Many other national outlets, including CNN, cite the John Hopkins database, which currently lists 199,481 deaths in the US.
Every estimate is imperfect; an analysis piece by the AP’s Julie Pace notes that “the real number is certainly higher.”
But the estimates surely still matter. Every loss matters, even as numbness sets in. “Six months in, Americans are tuning away from news about the pandemic,” WaPo’s Sunday’s front page story noted. “Google searches for virus information have plummeted by nearly 90 percent since March. Americans tell pollsters they hold little hope that the danger will recede anytime soon.” Signs of complacency, in other words, in a crisis that needs the opposite.
NBC’s story about the milestone contains an even more discouraging paragraph: “The country still faces many challenges in overcoming the pandemic, including agreeing on even the most basic facts. Americans are still fighting over whether to wear masks, whether the virus is serious and to what extent it’s safe to reopen certain businesses and to resume certain activities.” That brings me to Wyoming…

Spreading the truth to people who shout ‘hoax’

Ann and Marvin Robinson of Casper, Wyoming are still recovering from Covid-19, months after catching the disease. Ann has become “a living testament in a doubting moment,” the Casper Star-Tribune reporter Seth Klamann wrote earlier this month. “She’s embraced that role: She spends a lot of her time on the computer, crunching the daily coronavirus numbers into a spreadsheet and posting it to Facebook. She pushes back on her friends, people she’s known for years, when they call the virus a hoax. When one friend declared that she didn’t know anyone who’d been sick, Ann replied, ‘You know us.'”

Imagine Ann’s frustration when she sees posts on Facebook saying “Oh it’s just a hoax, it’s gonna go away on election day.” That’s her summary of what they say. She tries to spread the truth: “It’s not a hoax, I can tell you first-hand.” Read Klamann’s full story here. As I said on Sunday’s “Reliable Sources” telecast, Covid denialism takes many shapes, and it’s both deadly and destabilizing. The people best equipped to debunk the B.S. are the survivors…
Source: Read Full Article