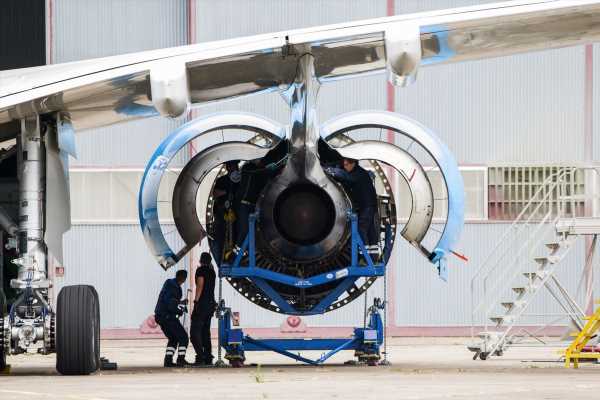 Rolls-Royce Holdings Plc fell to its lowest in 17 years after detailing a plan to raise as much as 2.5 billion pounds ($3.2 billion) to brace against a drought in demand for aircraft engines.

The U.K. company is reviewing options including a rights issue, other forms of equity and new debt, it said Saturday, confirming an amount reported by the Financial Times that was greater than in previous reports. The shares slid for a fifth straight session on Monday, dropping as much as 9.1%.

Rolls-Royce has lost more than three-quarters of its value this year amid a broad industry downturn triggered by the coronavirus pandemic. The company has been particularly hard hit by the drop in long-distance travel, which has virtually eliminated demand for the wide-body planes its engines power. Many aircraft in the existing fleet have been temporarily or permanently grounded, depriving Rolls-Royce of vital maintenance revenue it collects when they fly.

Plane maker Airbus SE, supplier Leonardo SpA and Air France-KLM shares were also hammered, with the head of the Franco-Dutch carrier warning more cost cuts may be needed after travel demand dropped off at the end of the summer holiday season.

In an interview published Monday in L’Opinion, Chief Executive Officer Ben Smith said the pandemic is forcing the company to accelerate and deepen its revamp. The airline will only operate profitable flights, he was quoted as saying.

A recovery in travel demand within the next five years “will be difficult,” French Transport Minister Jean-Baptiste Djebbari said Monday in an interview on LCI television, citing uncertainty about business travel and the possibility that consumer habits may change in favor of sustainable travel. The crisis will lower the number of operators in the industry and could raise ticket prices, he said.

Rolls stock sank 9.7% as of 9:28 a.m. in London, giving it a market value of 3.14 billion pounds, while Airbus and Air France-KLM shares dropped as much as 4.4% and 5.3% respectively. Leonardo stock fell to its lowest level in four months.

While a share issue would dilute existing investors at the lowest prices since 2003, Rolls-Royce has also seen its debt downgraded to junk this year, meaning borrowing would come at a higher cost than before the pandemic.

The company is in talks with sovereign wealth funds, including Singapore’s GIC Pte, as it turns to investors for the funds next month, the Financial Times reported, citing three people with direct knowledge of the matter. The company is working with Goldman Sachs Group Inc. on the planned equity raise.

“We continue to review all funding options to enhance balance sheet resilience and strength,” Rolls-Royce said in a statement on Saturday. The options include “a variety of structures including a rights issue and potentially other forms of equity issuance. Our review also includes new debt issuance,” it said.

The company said it hasn’t decided if it’s moving ahead with any of the options or the timing of the fundraising. Last week, it said it’s continuing to consider ways to bolster its coffers after the coronavirus-driven aviation downturn slammed revenue.