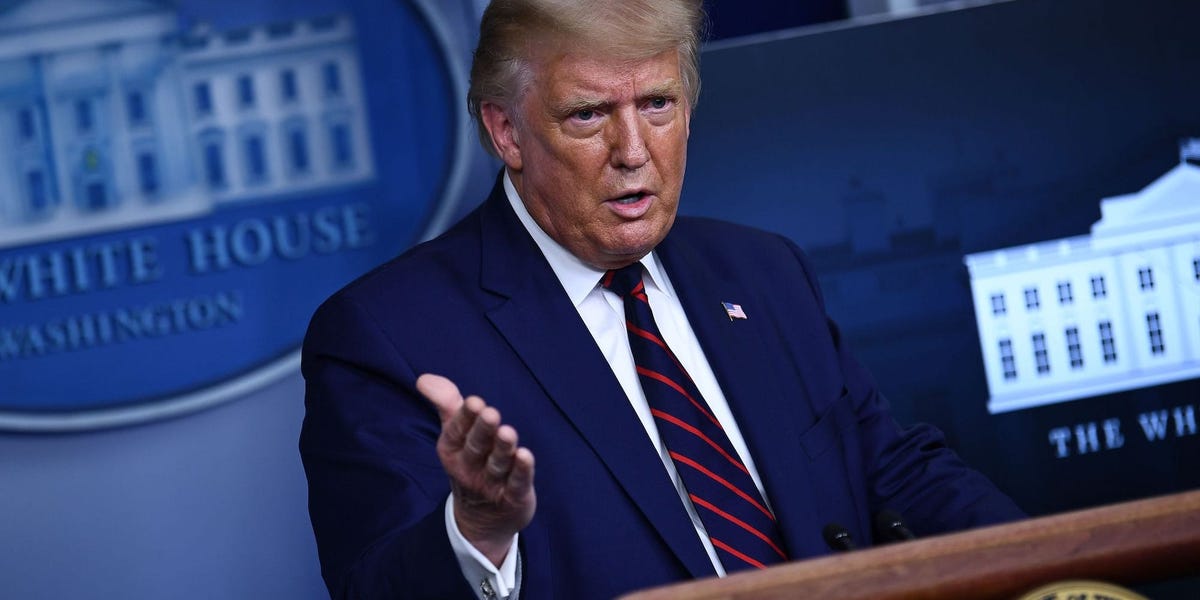 President Donald Trump refused to commit to a peaceful transfer of power following November's presidential election when asked about the topic Wednesday.

"Win, lose, or draw in this election, will you commit here today for a peaceful transferal of power after the election?" a reporter asked Trump during a press conference, citing growing unrest across the country over police brutality.

"We'll have to see what happens," Trump replied, before claiming without evidence that if he loses the election it will be the result of electoral fraud.

"You know that I've been strongly complaining about the ballots, and the ballots are a disaster," Trump said. "Get rid of the ballots and we'll have a very peaceful — there won't be a transfer, frankly, there'll be a continuation."

"What country are we in?" Biden told reporters when asked about Trump's comments, according to Politico, adding that he was "being facetious."

"Look, he says the most irrational things," Biden continued, according to a pool report on Wednesday. "I don't know what to say."

"The American people will decide this election. And the United States government is perfectly capable of escorting trespassers out of the White House," Biden spokesperson Andrew Bates said, according to ABC News reporter Johnny Verhovek.

"Fundamental to democracy is the peaceful transition of power; without that, there is Belarus. Any suggestion that a president might not respect this Constitutional guarantee is both unthinkable and unacceptable," Romney tweeted, referencing the disputed presidential election in Belarus.

"This is how democracy dies. A president so desperate to cling to power that he won't commit to a peaceful transition of power. That he seeks to throw out millions of votes. And a Republican Party too craven to say a word," Democratic Rep. Adam Schiff tweeted.

"In case anyone is unclear on the concept, in the United States of America, we do not "get rid of" ballots. We count them. Counting the ballots — *all* the ballots — is the way we determine who leads our country after our elections. The only way," Ellen Weintraub, a commissioner of the Federal Elections Commission, tweeted. Weintraub has previously debunked Trump's claims about mail-in voting fraud.

Trump has a long history of making unsubstantiated claims about electoral fraud, dating back to his allegations that he lost the popular vote in 2016 only because "millions" of people voted illegally. He has also been waging legal battles in multiple states in an attempt to stop the expansion of vote-by-mail and has admitted to using the USPS to sabotage those efforts.

Over the years, multiple extensive studies have found that widespread voter fraud is virtually nonexistent, difficult to successfully pull off, and discouraged through steep criminal penalties.

The US has had successful peaceful transitions of power in every single election since its inception in 1776, including following a contested election between Thomas Jefferson and Aaron Burr, during the US Civil War, and on multiple occasions when the electoral college vote has diverged from the popular vote.