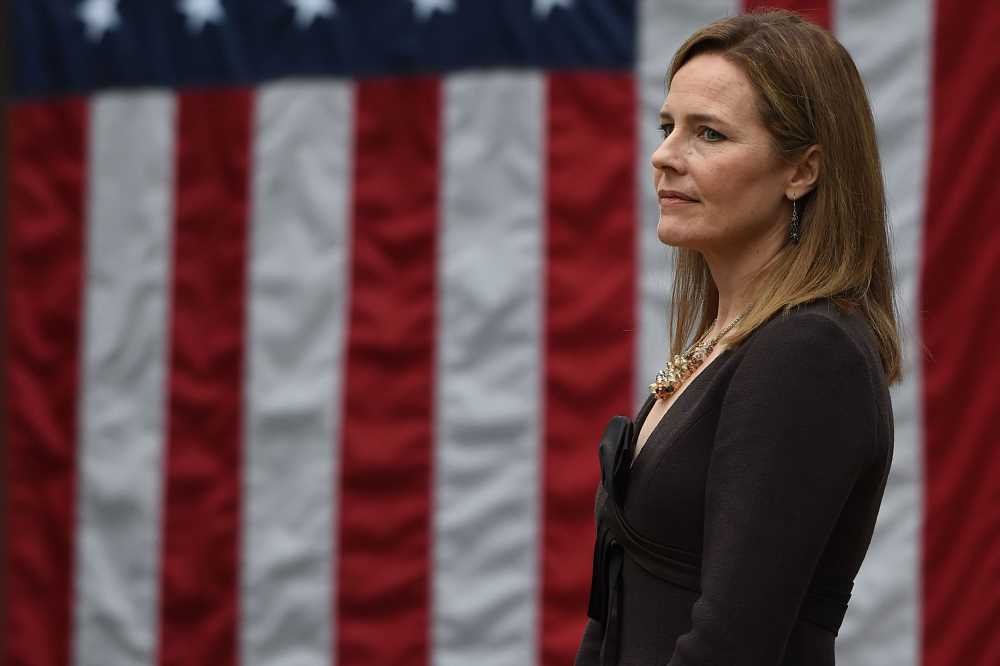 "I fully understand that this is a momentous decision for a president, and if the Senate does me the honor of confirming me, I pledge to discharge the responsibilities of this job to the very best of my ability," said Barrett, who could become the youngest member of the Supreme Court. "I love the United States and I love the United States Constitution. I am truly humbled by the prospect of serving on the Supreme Court. I would not assume that role for the sake of those in my own circle and certainly not for my own sake. I would assume this role to serve you."

Barrett also shared remarks about the late justice, Ruth Bader Ginsburg. "Should I be confirmed, I will be mindful of who came before me," she said. "She not only broke glass ceilings, she smashed them, and for that, she has won the admiration of women across the country." In his nomination speech, Trump called Barrett a "woman of unparalleled achievement, towering intellect, sterling credentials and unyielding loyalty to the Constitution."

The Republican-led Senate is expected to quickly vote and approve Barrett's nomination after Trump urged the GOP lawmakers to appoint his nomination “without delay" following the death of Ginsburg.

Republicans currently hold a 53-47 majority in the Senate and enough lawmakers in recent days have signaled they'll vote in support of Trump's nominee, despite Democratic outcry that doing so would be hypocritical The 48-year-old judge is seen by both Republicans and Democratic lawmakers as a social conservative who interprets the law by its original text, perhaps a byproduct of her time clerking for late conservative Justice Antonin Scalia, who was known for the same legal style.

An "originalist" in that sense, legal experts and lawmakers believe Barrett could have a great impact on potential rulings for issues such as abortion rights and on the Affordable Care Act.

Trump, 74, has made it a point to target both issues during his presidency and appointing Barrett would swing the court towards a 6-3 conservative majority, with Justices Sonia Sotomayor, Elena Kagan, and Stephan Breyer as the three remaining liberal-leaning members of the court.

“Amy Coney Barrett meets Donald Trump’s two main litmus tests: She has made clear she would invalidate the A.C.A. and take health care away from millions of people and undermine a woman’s reproductive freedom,” Nan Aron, the president of the progressive judicial advocacy group Alliance for Justice, told The New York Times this week. Beyond the bench, Barrett is a mother of seven children and is married to private attorney Jesse Barrett. They live in South Bend, Indiana, where Barrett taught at the University of Notre Dame's Law School for 15 years, before becoming a judge.

If confirmed, Barrett would be the only justice on the current court who did not graduate from an Ivy League law school.

Trump appointed Barrett to the U.S. Court of Appeals for the 7th Circuit court in Chicago in 2017 following her teaching career and then considered for the Supreme Court to fill Justice Anthony Kennedy's seat when he retired in 2018.

Trump ultimately went with Justice Brett Kavanaugh and reportedly told others in his administration that he was "saving" Barrett as his pick to fill Ginsburg's seat.

“She stands for all the things Ruth Bader Ginsburg was against,” Senate Minority Leader Chuck Schumer told Yahoo News recently. “And so many things that the vast majority of the American people are against.” Barrett is a devoted Catholic and a member of an Indiana-based Christian community group called People of Praise, which says its members "should always follow their consciences, as formed by the light of reason, and by the experience and the teachings of their churches."

The nominee's faith was once the center of a tense moment during her vetting process in 2017 to become a federal judge, when Democratic Sen. Dianne Feinstein told her, "The dogma lives loudly within you, and that's of concern."

Barrett, according to the Associated Press, replied that she does take her faith seriously, before adding: "I would stress that my personal church affiliation or my religious belief would not bear in the discharge of my duties as a judge.”