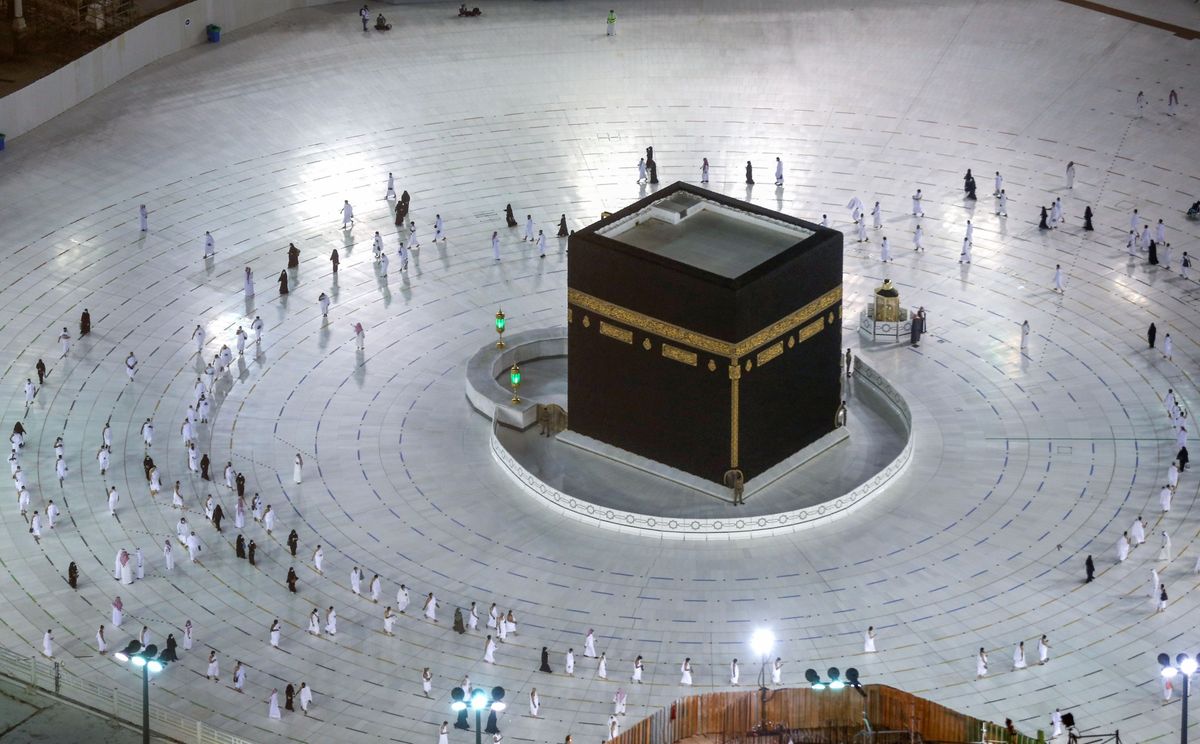 Riyadh, Saudi Arabia (AP) — A very small, limited number of people donning the white terrycloth garment symbolic of the Muslim pilgrimage circled Islam’s holiest site in Mecca on Sunday after Saudi Arabia lifted coronavirus restrictions that had been in place for months.

The kingdom had taken the rare step of suspending the smaller “umrah” pilgrimage that draws millions year-round from across the world in early March as the coronavirus morphed into a global pandemic and prompted countries to impose lockdowns and curfews to slow down transmission.

But as nations begin to ease those restrictions, the Saudi government on Sunday started allowing a maximum of 6,000 pilgrims a day to enter the sprawling Grand Mosque in Mecca. Only Saudi citizens and residents will be permitted to enter the mosque during this first phase of reopening, and each person has up to three hours to complete the pilgrimage.

The Grand Mosque, which is being sterilized and cleaned multiple times a day, houses the cube-shaped Kaaba that observant Muslims pray toward five times a day.

Before visitors can enter the mosque to pray or perform the umrah, they have to apply and reserve a specific time and date through an online application to avoid crowding and maintain social distancing. Visitors can also select via the app their means of transportation and meeting points.

State TV showed on Sunday what appeared to be fewer than 50 people circling the Kaaba at the same time and walking several meters (feet) apart. Typically, the mosque would be packed with worshippers from around the world crowded shoulder-to-shoulder at all times of the day and night.

The second phase for loosening restrictions at the Grand Mosque comes into effect on Oct. 18, allowing a maximum of 15,000 pilgrims and 40,000 for prayer from among residents and citizens based on allocated times via the app.

Muslim travelers from outside Saudi Arabia could be allowed to perform the umrah pilgrimage as early as Nov. 1, the Interior Ministry has said. Saudi Arabia recently began easing some restrictions on international flights for the first time since March.

The kingdom held a dramatically downsized, symbolic hajj pilgrimage in July due to concerns that it could easily have become a global super-spreader event for the virus. Pilgrims were selected after applying through an online portal and all were residents or citizens of Saudi Arabia. Rather than the more than 2 million pilgrims the kingdom hosts for the annual event, as little as 1,000 took part after being tested for the virus and quarantined.

Despite taking early and sweeping measures to contain the virus, Saudi Arabia has recorded nearly 336,000 cases, including 4,850 deaths.