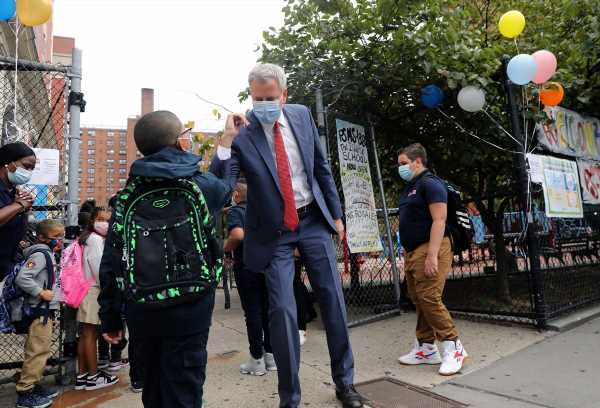 It took New York City more than three months to reduce the spread of the novel coronavirus to a rate considered low enough to reopen the largest U.S. public school system. Just days after students returned to class, fear of resurgence is forcing Mayor Bill de Blasio to walk back that effort.

After insisting for weeks he would keep all schools open unless the average citywide infection rate exceeded 3% for a week, de Blasio reversed course Sunday. He asked Governor Andrew Cuomo for permission to shut select schools and businesses starting Oct. 7 in nine problem ZIP codes. The areas in south Brooklyn and Queens show infection rates from 3.86% to 8.31%, pushing the citywide seven-day average to 1.72% after months in which it hovered near 1%.

“This is out of an abundance of caution,” the mayor said on Sunday to explain his change of policy. “The plan is to rewind in these nine ZIP codes, to go back to address the problem by using the tools that we know work.”

De Blasio’s announcement came shortly after Cuomo called for stepped-up enforcement of social-distancing restrictions in those city ZIP codes, as well as about a dozen others.

“We will close all business activity in the hot spots where the local governments cannot do compliance,” Cuomo said. “If the localities do not do testing immediately in the schools in those areas, the state will close them immediately.”

As of Sunday night, the governor had not yet responded to the mayor’s request to shutter some schools and businesses.

Almost all of the localities have insular Orthodox Jewish communities with lower than average mask-wearing compliance, distrust of secular authority and large, crowded households that create enhanced risk of virus transmission.

New York City, with 1.1 million students, was the only major public school system in the U.S. to resume in-person learning last month. The city was the early epicenter of the nation’s Covid-19 outbreak, grinding to a halt in March in an attempt to control its spread. At its worst in early April, the city’s weekly average of new cases exceeded 5,200.

The city began a slow, phased-in reopening of its economy in June, and had kept the spread under control until recently, when clusters began emerging. Last week, as de Blasio was celebrating the reopening of schools, he also was lamenting the hot spots. The citywide seven-day average of new cases last week hit 464. The last time it was more than 400 was in early June.

The highest rates of positivity for the past two weeks have been reported in Borough Park, with 8.31%; Gravesend/Homecrest, with 7.59%; Midwood, 6.98% and Bensonhurst/Mapleton, at 6.47%, according to the mayor’s office. About 30% of the new cases in the city have come from neighborhoods that represent 8.7% of the population.

Meanwhile, the city is monitoring and enforcing an array of mask-wearing and social distancing regulations in another 11 ZIP codes where infection rates are edging up, but don’t require restrictive measures. At least not yet, de Blasio said. “It’s something that we believe is necessary to keep this city from going backward, toward where we were months ago,” he said.

De Blasio had initially set a Sept. 10 date for students to return to school in a blended-learning program. He agreed to two delays after pressure from the teachers’ union, which sought more time to make sure the schools had enough staff and equipment, and that proper testing and tracing protocols were in place.

Though the union had agreed to the latest reopening dates, it had rejected de Blasio’s all-or-nothing approach to base shutdowns on a citywide, 3% threshold infection rate over a seven-day average. Instead, it pushed for a school-by-school or neighborhood-by-neighborhood approach. Michael Mulgrew, president of the United Federation of Teachers, praised the mayor’s change of heart.

“This is the right decision, one that helps protect our schools, our neighborhoods, and ultimately our city,” Mulgrew said in a statement.

Jasmine Gripper, executive director of the Alliance for Quality Education, a coalition of parent advocates, said families are frustrated by yet another in a series of last-minute switches in plans.

“It may make sense, but we’re annoyed the mayor has given parents little or no notice to figure out what to do,” Gripper said.

Local officials and community leaders also criticized the mayor for deploying police, sheriff’s officers and sound trucks into their areas without giving prior notice. Brooklyn Borough President Eric Adams, a candidate to replace the term-limited mayor in 2021, joined those critics Sunday, saying the policy changes reflect “poor planning combined with a lack of communication,” and a failure to enlist community leaders with credibility and knowledge of their neighborhoods.

The mayor’s original citywide policy never made sense, said Art Zander, who teaches at a school in Ozone Park, Queens, that’s outside but near the problem ZIP code of Far Rockaway. Another Queens teacher, Evan O’Connell, said there’s confusion because students who live in the hot spot of Kew Gardens attend his school, which is not in a danger zone.

Almost two-thirds of the Metropolitan Expeditionary Learning School in Forest Hills chose all-remote instruction, O’Connell said. And while six students attended his class Friday, some expressed doubt they would stay with it.

“This move will sow more confusion for families, and some fear, too, that will lead to more choosing remote instruction,” he said.