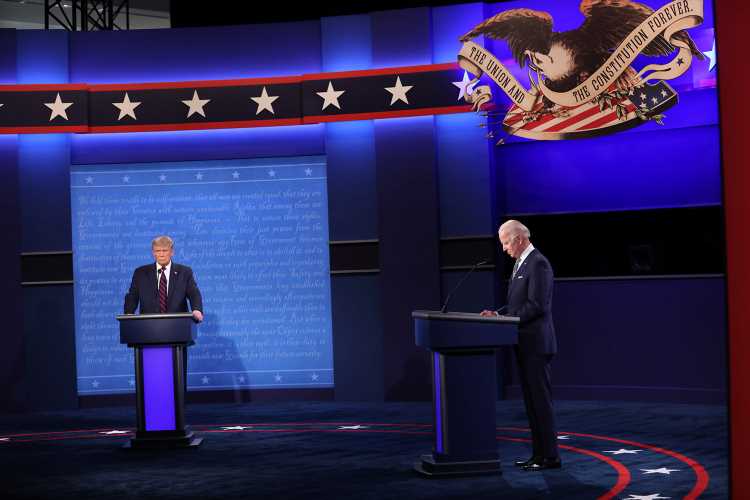 The remaining two presidential debates of the 2020 election cycle hang in the balance after President Donald Trump on Thursday morning refused a virtual format, which organizers said was needed for health reasons while he is sick with the novel coronavirus. And then Joe Biden's campaign rejected Trump's subsequent proposal to delay the remaining debates.

Whether or not Biden and Trump will face-off again before the Nov. 3 election remains unclear, but it does bring up the question of whether past debates have ever been, well, up for debate.

There is actually a long history of candidates skipping out on primary debates — either because they hadn’t yet officially announced their candidacy or because they didn’t agree with the debate hosts.

As Politifact notes, those decisions have occasionally cost politicians dearly. In 1980, after he passed on the final debate before the Iowa caucus, Ronald Reagan ultimately lost the state to George H. W. Bush (though Reagan went on to win the GOP nomination).

In the 2016 Republican primary, Trump opted out of a Fox News-hosted debate over a disagreement with Megyn Kelly. Politicians balking at general election debates has been more rare, though.

The first televised general election debate is one of the most well-known, with a sweaty, disorganized Vice President Richard Nixon taking on a young and charming-looking Sen. John F. Kennedy in 1960.

The third Nixon-Kennedy debate — also filmed in 1960 — serves as a precursor for the planned (and now possibly canceled) virtual debate against Trump and Biden. Years before the age of streaming video and web cameras, that event saw the candidates debate remotely — with Kennedy in New York, Nixon in Los Angeles and a panel of moderators in Chicago. The candidates were shown on a split-screen.

Following his notorious underperformance against Kennedy, Nixon opted out of future debates against Hubert Humphrey in 1968 and George McGovern in 1972.

The 1964 election also saw no presidential debate, with Lyndon B. Johnson turning down requests to face Republican candidate Barry Goldwater.

After Carter said he would not participate if Anderson (a former Republican running as an independent) was present, the first debate featured only Anderson and Reagan.

The second debate between the three was canceled and the third debate included only Carter and Reagan. Though Carter got his wish to debate Reagan one-on-one, many observers felt the actor-turned-politician performed much better — in a hint of the landslide victory to come.

Even when they have taken place as planned, presidential debates have always been magnets for controversy — and, occasionally, some minor speed bumps.

Roughly an hour into a 1976 general debate between President Gerald Ford and his Democratic challenger, former Georgia Gov. Jimmy Carter, the audio feed cut out, muting both candidates, who continued debating, unaware of the problem. Once the candidates were notified, they were made to stand silently at their podiums for nearly 30 minutes while the glitch was corrected.

Since 1980, all Democratic and Republican nominees have shown up for the general election debates.

Should Trump and Biden not agree on a future date, or format, the lack of a presidential debate would be historic in recent memory. But it wouldn't be entirely out of character for Trump, who has backed out of debates in the past — despite his campaign arguing this year it would be Biden and not him who would skip doing all three debates.

The first, and so far only, presidential debate was a chaotic affair last week, in Cleveland, with Trump repeatedly interrupting the moderator and heckling Biden.

Since then, Trump has been diagnosed (and hospitalized) with COVID-19, a highly contagious and deadly disease. The move to a virtual format was meant to prevent the spread of the illness at a time when the president could still be contagious.

Trump, though, called a remote event "ridiculous," saying he would not participate. That set off multiple rounds of back-and-forth messages between his campaign and Biden's and ultimately put the remaining debates in jeopardy.